Feng Zhenghu: An Interview With CNN 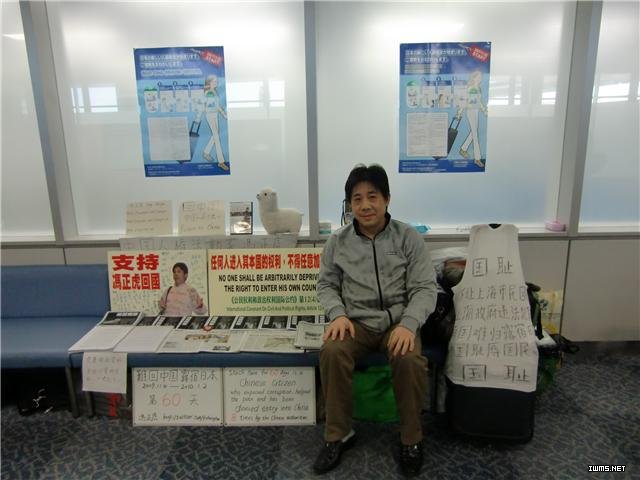 Today is my 28th day camped outside the gate to Japan.

Last night I got nearly no sleep, and after waking this morning in a daze, I sat there in my bewilderment and continued to sleep. After finding a bit of energy, I had a midday interview with CNN.

Last night there were no more arriving passengers after about 10:30 p.m., and border control staff were getting off work too. I could surf the Internet peacefully. At around 11:30 p.m., lights in the arrival lobby went out, only the lights in the offices were left on. This meant that all staff had ended their shifts, and I was the only one left in the lobby. I should “finish work” too. I washed my face and feet in the restroom, made my “bed,” and fell asleep. At 12:11 a.m., Mr. Zhang from Denmark called to offer me some assistance.

At 2:00 a.m., I tossed myself awake and decided I might as well just get up. I took out the plastic foam that Chinese students from Chicago gave to me yesterday, and placed it on the chair. Then I went into the sleeping bag to try out this new sleeping environment.

At 6:00 a.m., I was woken by a call from Mr. Yang in the U.S. and from a Radio Free Asia reporter. They told me that activists in the U.S. are going to protest in support of my return home at the Chinese Consulate in L.A.

Everyone was trying to help me. I had to answer their phone calls. But we had time differences. They all sound vigorous when I’m nothing but drowsy. In the main hall, there’s no way to lie down during the day, I can only sit or walk around. I can only count on sleeping during the night. In order to maintain my strength and to persevere in this difficult environment, from now on I won’t answer my phone between 11:00 p.m. and 7:00 a.m. Please friends, pass this on, call me at a different time, or send an SMS. Thank you all for understanding.

At noon, CNN sent four people to interview me. They called me beforehand and asked if I need anything, if they could bring me some fresh Chinese food. I told them there was no need to buy anything. Since they were here for an interview, they won’t be allowed to bring in anything. In fact, I feel sort of like I’m in jail. I’m not free, I’m completely segregated from domestic Japan.

This interview was relatively long, from 12:00 p.m. to 2:00 p.m. In addition to being interviewed by the host, I cooperated with the videographers, allowing them to film my life in the airport: walking around, sitting-in, writing on the computer, washing my hands, etc. Apparently, being an actor is a tough job. But, it was a long stretch and I was already tired. After all, these 28 days have not allowed my life to be normal, with all the busy-ness and lack of sleep. I am just an ordinary Chinese man. I don’t know how I suddenly became a poster child for China’s human rights endeavor, being interviewed by mainstream media from all over the world. The leaders in Shanghai should be given credit for this, they created this poster child.

CNN is a major American media outlet and Japan attached great importance to this. Managers of the Narita International Airport came forward to do interviews since it would be a great opportunity for them to publicize to an American audience.  This management department was quite friendly to me, they were the first Japanese company to give me food. The manager also said that we had become friends. My actions and spirit had earned respect from the Japanese people, and I am thankful for their understanding and help.

At 2:40 p.m., a Taiwanese stewardess came to me with a warm rice ball, and asked, “Did you have lunch?” I replied, “I just did, thank you.” I took the rice ball and put it in my jacket to keep it warm for dinner.

10 minutes later, a Taiwanese steward who was an English-speaking foreigner also brought me a bag, including a box of fried dumplings, a box of fresh meat-stuffed buns, a pair of ear-plugs, and a sleeping mask. He wished me “good luck!” He was very thoughtful, knowing that only with plugged ears and covered eyes could you enjoy restful sleep in this noisy and brightly lit hall. Actually though, I could sleep without all of this. Back home I’d already been exposed to this type of life. With lights on all night and four guards waiting at my side in a narrow room, I still slept. When I was imprisoned at Shanghai Tilanqiao Prison,  I read the “Caigentan,” which contained lines of this type: calm while calm is not truly calm; calm in action truly is calm. If you have a still heart, disturbances from the outside won’t be of any relevance.

At 5:45 p.m., a Canadian stewardess brought me another bag of food. A new face with the same smile. It seemed that they were really going to take turns bringing me food. There was plenty of food in this one too: two hamburgers, two bottles of water, a can of coke, and some fruit. I now have enough to last me through tomorrow, no need for instant food.

I again told my friends not to bring me food for now,  flight attendants from China Airlines and Air Canada are taking turns bringing my meals. Food is no longer a problem for me. If I ever return home to China, I will visit Canada and Taiwan to thank these kindhearted stewardesses and stewards.

Now, while I’m a person who cannot return to his home country, Narita Airport is quite a suitable temporary home. This place is filled with love from all over the world.  If possible, I could be just like Viktor, the protagonist in the Hollywood movie “The Terminal.” I can find a temporary job and don’t have to rush out of here.

So, the central leaders in China can take their time to negotiate and think. Please come up with a good resolution in order to prevent another national shame like this one, disallowing a citizen’s return to his country. Of course, I am not angry at the leaders in Shanghai. Without their “wise decision,” how would I have earned my global celebrity, or earned the care and support of my compatriots?

On Twitter, I posted the article “Blocking Feng Zhenghu From Returning Home is Our National Humiliation.” All friends on Twitter please repost it, let more Chinese people know about this story. Chinese people shall remember this national shame in order to end it permanently. To know shame is akin to bravery. [Chinese]