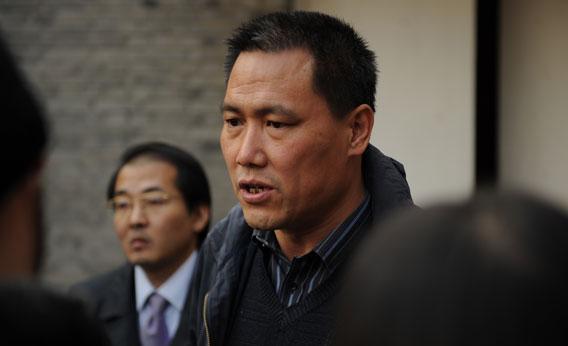 Beijing authorities have again delayed the trial of rights lawyer Pu Zhiqiang, 16 months after his detention and four after his indictment for inciting ethnic hatred and picking quarrels. The latest postponement follows a series of suspected stalling tactics to extend Pu’s pre-indictment detention. From South China Morning Post’s Verna Yu:

Mo Shaoping said the Beijing No.2 Intermediate Court told him more than a week ago that his application for police to release Pu on bail was rejected.

[…] “No one should be regarded as a criminal before being convicted, but he has now been locked up for over a year – this is against the spirit of the rule of law,” Mo said, citing the reason he gave the court for demanding Pu’s release.

But the court rejected his request, saying Pu’s trial had been postponed for another three months in mid August and that Pu was in reasonable health.

Pu’s case has become symbolic of a wider crackdown on Chinese civil society, which escalated in July with the detention or questioning of more than 200 rights lawyers and others connected with them. Twenty-two remain in custody, with several accused of conspiring to sway court cases by stirring up public opinion.

Last weekend, five rights lawyers were barred from traveling abroad by municipal public security authorities in Beijing, on the basis that they pose a threat to national security. From Ryan Kilpatrick at Hong Kong Free Press:

Chen Jiangang and Li Guobei were stopped at Beijing Capital International Airport on Sunday as they attempted to board flights to Hong Kong.

Customs officials at the airport were not aware of the reason they were barred from travelling, the lawyers said, and could not produce any documentation to substantiate the warning. When they tried contacting public security in Beijing, no one there was aware of their case.

On the same day, Huang Simin was stopped at Wuhan Tianhe International Airport and Liu Zhengqing was forbidden from crossing the border at Futian, Shenzhen. At 5pm on Saturday, Ge Yongxi was also stopped at the Futian border crossing, where customs officers similarly informed him of the Beijing PSB notice, recording the entirety of their exchange.

When Ge asked the officials for a copy of the notification, they said they did not have one. Ge questioned whether this was procedurally appropriate but officers said that were “only responsible for notifying [him] and had no responsibility for anything else.” [Source]

The absence of proper documentation has been a recurring theme since the start of the campaign.

The “Black Friday” detentions prompted a wave of protest from governments and legal organizations around the world. The American Bar Association struck a discordant note with a mild statement which NYU legal scholar Jerome Cohen described as “adequate” but somewhat short of “appropriate.” On his new blog, with harsh new regulations on foreign NGOs in China looming, Cohen explains the reasoning behind the ABA’s tepid response:

[…] Of course, even the outpouring of protest is not likely to be helpful in the sense of persuading XJP to call off the hounds, but it surely is helpful in supporting the victims and their colleagues and families and the hundreds of thousands of Chinese legal officials, judges, prosecutors, lawyers, legislators, law professors, journalists and activists who have been coerced into suffering this abomination in guilty silence. It is also helpful in letting the American legal profession and general public know more about reality in China today.

[…] Human rights NGOs that cannot set up shop in China have no hostages to fortune. Those like the ABA that have labored long and hard in China, with some staff devoting their lives to this kind of work, have a lot to lose if their protests lead to their ouster and the closing of their office. That was the principal articulated consideration motivating those within the ABA who preferred no statement or one that would have been ludicrous in the eyes of the world. Of course, one can say that their view too is based on money since their jobs and funding could be cut off by a hostile PRC reaction, but I think that a genuine zeal for law reform and a belief that their efforts have already produced tangible progress and will in the long run bear greater fruit was their primary motivation. Concern was also expressed that a strong statement might lead the PRC to impose sanctions against the persons of their American and especially Chinese staff in Beijing, an idea that seemed to carry weight with some within the ABA who know little about China.

So ABA leaders were called on to balance conflicting considerations, essentially to balance the speculative consequences of a strong statement against the less speculative consequences of failing to meet the challenge, including the ongoing but impossible to stop attack on China’s human rights lawyers and the damage to ABA’s reputation. Hence the compromise. […] [Source]

In an op-ed at The Washington Post, Justice Labs’ Robert Edward Precht argues that organizations must resist the chilling effects of China’s ongoing tightening of control:

Lawyers’ groups worldwide mobilized to make forceful statements criticizing the arrests, but the ABA has been noticeably quiet. As Yu-Jie Chen, a researcher at the U.S.-Asia Law Institute, stated in an online forum of China experts, “Protests from other lawyers’ groups are not only closely watched by Beijing but also rights lawyers themselves. Several Chinese rights lawyers with whom I have spoken have expressed how important it is for foreign lawyers’ groups to show public support for them and to protest about the Chinese government’s mistreatment of lawyers.”

More than two dozen lawyers’ groups from around the world have criticized the attacks on Chinese lawyers, but all eyes have been on the ABA.

[…] The ABA is not alone in facing moral dilemmas in China. In the past decade, environmental groups, foundations and universities have poured tens of millions of dollars into setting up offices and campuses in the country to extend their important missions to this growing global giant. Nonprofits, by definition, exist not to make money but to promote social values. Universities that are pledged to uphold academic freedom must navigate an environment in which faculty cannot freely speak on topics such as Tibet or human rights. They all face pressures not to offend their Chinese hosts, but the solution cannot be to compromise the values that define them. [Source]