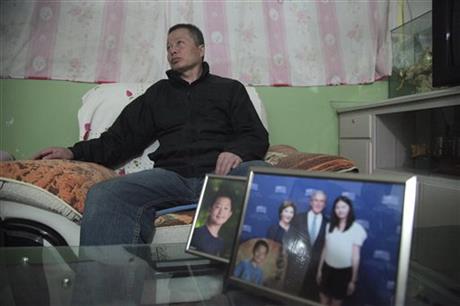 Veteran rights lawyer Gao Zhisheng was reportedly unable to speak intelligibly when he emerged from his latest imprisonment a year ago. In an interview with the Associated Press, Gao details the abuse that left him in this state, including extended torture and three years of solitary confinement. From Isolda Morillo and Didi Tang:

“Every time we emerge from the prison alive, it is a defeat for our opponents,” Gao said in the face-to-face interview.

Gao, who lives under near-constant guard in Shaanxi province, gave the interview earlier this year on the condition that it not be published or aired for several months, until he could finish the manuscripts of two books and send them safely outside of China for publication, which he now says he has done. He also later sent the AP his manuscripts and gave permission to quote from them.

[…] In his book he says he endured more torture, including with an electric baton to his face — a moment that he remembers as a near out-of-body experience when he heard his own voice.

“Undoubtedly, it was from me. I don’t know how to describe it,” Gao wrote. “That sound was almost like a dog howling when its tail is forcibly stepped on by its master. Sometimes it sounded like what a puppy makes when it’s hung upside by its tail.” [Source]

Gao also discussed his faith in God and refusal to leave China. His wife, Geng He, has lived the U.S. with their children since 2010. She was due to meet with American officials this week ahead of Xi Jinping’s state visit to Washington, in which human rights look set to take a back seat to issues like cybersecurity. In a letter translated at China Change, however, Gao asked Geng not to attend the meeting:

Dear wife, when I first heard that you were going to meet the Deputy Secretary of State in private on the 23rd, I thought it was very inappropriate. Forgive my direct speech: I strongly oppose this.

Firstly, even if it was an open meeting with the president, it’s not what we need right now—how much less a private meeting with his subordinate. Why go about it so secretly? What is there to be afraid of? Who’s the one afraid? Who doesn’t want to be seen in the light of day holding the meeting?

[…] Western politicians as a whole have a long history of getting along with evil regimes for their own selfish and greedy ends. […] Since the Clinton era, the American political class has disregarded the basic calls of humanity and muddied itself by getting so close to the sinister Communist Party. When these politicians raise their glasses together, justice, human dignity, and conscience, are all given a price tag. The Party officials who commit crimes against humanity still go about with their heads high, having long forgotten their indelible bloody crimes. The Western politicians who have become their accomplices have forsaken the conscience and sense of honor that humans should have. [Source]

As the AP reports, Gao claims to have received a divine revelation that Communist Party rule will end in 2017, and believes that contact with its Western “accomplices” in the meantime is pointless.