Wang Xiaolu’s Confession and the Future of Chinese Media 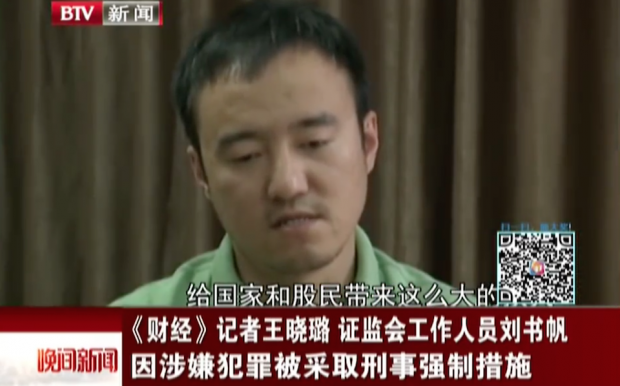 For the New York Times, Amie Tsang writes about the recent detention of Caijing journalist Wang Xiaolu, who publicly “confessed” on CCTV to writing reports that contributed to the recent stock market crash. Tsang looks at what Wang’s detention means for publications like Caijing, which previously were able to operate with a relative amount of freedom compared to other Chinese media:

Caijing, observers say, has stayed at the forefront of financial reporting and has performed better than many expected. But the confession of Wang Xiaolu has some questioning whether free rein for Caijing, Caixin and publications like them is coming to an end, either because of government pressure or because journalists are trying to protect themselves.

“I think it is a crackdown on media and a step-up of censorship,” said Mr. Cheng, a stock market investor in his 40s who wanted to be referred to only by his surname because of safety concerns. “I can see that because of what happened to Caijing magazine, many media don’t want to be the first one to report important news. Like the day before yesterday, China Securities Regulatory Commission started another action to further restrict loans for stock trading, but I can see that no media wanted to be the first one to report this.”

Luo Changping, a former deputy managing editor at Caijing, said people he knew who work at Caijing or have worked there are upset. And although anyone going into journalism in China knows the constraints they will work under, standards are changing, he added.

“Maybe a few years ago, the line was higher,” he said. “But now it’s dropping lower on everyone. Many journalists are saying that nowadays, there is no media that is safe. Everyone lives in a comparatively dangerous situation.” [Source]

For China Media Project, David Bandurski writes that for Chinese journalists, Wang’s detention will almost certainly have a chilling effect, no matter what the ultimate outcome of his case is:

The Global Times article then sought to “clarify” a few points about Wang’s arrest:

First, it is already the general consensus that the reasons for the recent turbulence in the stock markets are multi-layered and complex. The impact created by Wang Xiaolu’s report should have been limited. As for the casting of Wang Xiaolu as the “scapegoat” for the stock market slide, or using him as to score points with public opinion, I am confident that the government isn’t of this mind. Because clearly he cannot bear all of the blame. Conversely, if we suggest that the government is using his case to send a strong message to those who spread untruthful information, “executing one as a warning to others,” this conjecture at least makes logical sense.

It is hardly reassuring to tell ourselves that Wang Xiaolu is not a scapegoat, but rather the chicken of Chinese proverb, murdered to frighten the monkeys. But I think, unfortunately, that the writer of the Global Times article is making a valid point here.

As the newspaper is careful to remind us, we still do not have all of the facts in Wang’s case, and “the court will need to obtain evidence of his guilt before it can ultimately convict him.” (Apparently, the Global Times cannot imagine his innocence). But I have little doubt that Wang’s predicament will send a very strong message to Chinese journalists. And that is troubling news indeed, particularly given the already overbearing climate for media under Xi Jinping. [Source]

Some Chinese netizens have responded to Wang’s alleged confession with skepticism that he was responsible for the stock market crash, according to Foreign Policy’s Bethany Allen-Ebrahimian:

Many Chinese web users, meanwhile, aren’t buying it. “They’ve finally found a sacrificial lamb,” wrote one user in a popular comment on Weibo, China’s huge microblogging platform. “This is always how they deal with major problems,” wrote another user. Wang Ran (no relation), the influential CEO of Beijing-based investment bank China E-Capital, directly questioned the allegations against the accused reporter, who had relied on private sources for his story. “If soliciting private opinions in order to obtain newsworthy information is wrong,” wrote Wang Ran, “then journalism as a profession simply should not exist.” [Source]