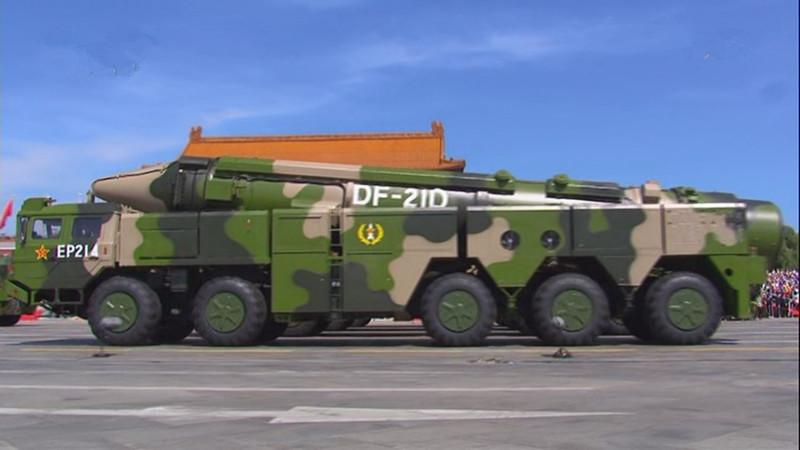 In his introductory speech at Beijing’s V-Day anniversary parade on Thursday, President Xi Jinping stressed China’s commitment to peace, and announced a sizable reduction in its armed forces. From a transcript at Xinhua:

Today is a day that will forever be etched in the memory of people all over the world. Seventy years ago today, the Chinese people, having fought tenaciously for 14 years, won the great victory of their War of Resistance Against Japanese Aggression, marking the full victory of the World Anti-Fascist War. On that day, the world was once again blessed by the sunshine of peace.

[…] In the interest of peace, China will remain committed to peaceful development. We Chinese love peace. No matter how much stronger it may become, China will never seek hegemony or expansion. It will never inflict its past suffering on any other nation. The Chinese people are resolved to pursue friendly relations with all other countries, uphold the outcomes of the Chinese People’s War of Resistance Against Japanese Aggression and the World Anti-Fascist War, and make greater contribution to mankind.

The People’s Liberation Army of China is the people’s army. All its officers, men and women must bear in mind their responsibility of serving the people whole-heartedly, faithfully fulfill the sacred duty of protecting the nation’s security and people’s well-being, and carry out the noble mission of upholding world peace. Here, I announce that China will cut the number of its troops by 300,000. [Source]

Chinese netizen jokes that this guy in the middle will be the first of the 300,000 to be downsized. pic.twitter.com/Vvcz56Puqn

Though substantial, the reduction would still leave around two million personnel. Moreover, though offered as a gesture of peace, it is part of a long-running program to increase the PLA’s effectiveness by shifting its emphasis from manpower to modernization. From The New York Times:

Rory Medcalf, the head of the National Security College at the Australian National University in Canberra, said the reductions were unlikely to ease regional worries about China’s growing military strength, because they were part of the modernization program to shift the People’s Liberation Army’s resources from traditional land forces.

”It would seem to be a pleasant surprise, because he’s clearly dressing it up as a signal of peace and good will,” Professor Medcalf said by telephone. “But China probably doesn’t need an army as large as it has.”

“Personnel are a massive cost in a military budget, and there’s been a lot of growth in military wages in China in recent years, so there are sensible capability reasons to cut personnel numbers without cutting effectiveness,” Professor Medcalf said. “This could also free up part of the budget for rebalancing the P.L.A. towards more advanced capabilities.” [Source]

The slowing economy and growing labor costs have given such budgetary considerations a new urgency, sharpened further by the sapping effects of corruption. A front page editorial in the People’s Liberation Army Daily last month warned that “if we allow the growth and spread of corruption, the guns will rust, the pillars will collapse.” But the fight against it may have cleared the way for long-planned overhauls, details of which surfaced in the days before the parade. From Minnie Chan at South China Morning Post, for example:

Several plans for reform have been suggested, but one obtained by the South China Morning Post from reform-minded officers envisages the most radical restructuring of the forces ever. The plans, aimed at turning the People’s Liberation Army into a modern fighting force fit for battle and capable of projecting power overseas, envisage overhauling outdated command structures, unifying the army, navy and air force along Western lines, and further consolidating the army’s military command regions, now seven, down to four.

Such an overhaul is unlikely to be welcomed by all, given that it would involve cutting PLA and armed police personnel from 3 million to 2 million, promoting the role of the navy and air force at the expense of the army, and dispensing with command structures many officers have spent their lives climbing.

Yet keen observers say  the commemorations, with their likely boost to morale and patriotism, give President Xi Jinping  – who has already culled many of the corrupt military “tigers” standing in the way of reform – a springboard for change. [Source]

An infographic at SCMP illustrates the proposed structural changes, while at China Real Time, the U.S. Naval War College’s Andrew Erickson commented on the plans:

Through his anti-corruption campaign, Xi has “shown ability to impose his will on the PLA”—a skill that his predecessor Hu Jintao lacked utterly and that Jiang Zemin wielded inconsistently, [Naval War College Professor Nan] Li emphasizes. Xi has a clear, ambitious vision for PLA reform and is willing to take temporarily unpopular steps to implement it—such as removing even the highest-level officers he perceives as undisciplined and obstacles to reform. The next step may be a major one: downsizing the ground forces further and making them a subordinate service with their own “PLA Army” headquarters, while expanding the Navy and Air Force.

The biggest winner? The PLA Navy (PLAN), Li argues. It will benefit as leadership, command systems, and force structure are apportioned more evenly among the services to support integrated joint operations. The goal of this is to be able, if necessary, to prevail in nearby maritime crises and fight and win “local war under informatized conditions.” These are the types of high-end contingencies currently of greatest concern to China’s leadership because it judges them, respectively, most likely to erupt, and most likely to threaten vital national interests.

One piece of hardware did attract particular scrutiny on Thursday:

From Erickson, at China Real Time:

[…] Announced as an “assassin’s mace” at the parade, if properly targeted, this missile has the potential to disable ships including U.S. carrier strike groups, the centerpiece of American seapower. No other nation has such a system; Washington and Moscow remain constrained by a treaty they signed in 1987. [Source]

“Some analysts say such missiles threaten to consign aircraft carriers — which form the basis of current US naval strategy — to the dustbin,” The Financial Times’ Charles Clover reported. At The National Interest on Wednesday, Harry Kazianis presented a more skeptical overview of its likely effectiveness:

China’s “carrier-killer,” just like many of Beijing’s weapons systems must be thought of as part of a larger anti-access strategy. If a conflict with Washington or another great power ever occurred, China is betting on using such weapons platforms to make any sort of intervention in the Taiwan strait, East or South China Seas as painful as possible. With that said, there is much we don’t know about the DF-21D, or how well it would work in an actual shooting war.

In the end, the weapon might not be the great “game-changer” that many point it out to be, but a great complicator. Let’s just hope the only times we see this missile are on a parade route. [Source]

Read more on the displayed weaponry at Erickson’s blog, in his post-parade analysis at China Real Time, and in a list of notably present or absent systems at South China Morning Post. The parade’s showcasing of these domestically produced arms made it an effective if ironic ad for China’s growing exports, The Wall Street Journal’s Jeremy Page reported on Wednesday:

China turned to develop many of its own weapons after the U.S. and European countries imposed an arms embargo after a military crackdown on pro-democracy protesters around Tiananmen Square in 1989. Beijing has also turned to Russia, which has sold China billions of dollars’ worth of arms since the Soviet collapse.

[…] One goal of the parade is to promote defense exports, although the primary aim is to present an image of national strength to a domestic audience, some analysts and diplomats said. Dignitaries from Africa, South America and Central Asia—potential buyers—will be in the reviewing stand.

“It is a useful way to let the world know that all these systems are now Chinese,” said Jack Midgley, a director of Deloitte Consulting’s defense consulting practice. The prospective customers, he said, are countries which “for the most part want lower technology systems, and that is where the Chinese have the competitive advantage.” [Source]

Though China has insisted that the parade was not aimed at any particular nation, Japan’s wartime aggression was clearly and repeatedly highlighted. With relations between the two countries tense, the Japanese defense ministry submitted a record budget request this week. From The Guardian’s Justin McCurry:

The ministry has asked for 5.09 trillion yen (£27bn) [$42.4bn] for the financial year starting in April 2016, amid concern over Beijing’s construction of artificial bases in the South China Sea and its claims to the disputed Senkaku/Diaoyu island chain in the East China Sea

[…] Japan had been making annual cuts to its defence budget for a decade up to 2013. The increases since then reflect its growing anxiety about China’s expanding naval reach. The rise is also in line with Japan’s more assertive defence policy under the conservative prime minister, Shinzo Abe, as he seeks to check Chinese influence and expand the scope of his country’s military.

Abe’s ongoing attempts to push through legislation that would allow Japanese troops to fight alongside allies on foreign soil for the first time since the end of the second world war brought tens of thousands of people out in protest on Sunday.

In an indication of the PLA Navy’s growing “blue water” capability, meanwhile, Chinese vessels have been spotted in waters off Alaska for the first time, coinciding with both the Beijing parade and a trip to the state by President Obama. From Jeremy Page at The Wall Street Journal:

The officials have been tracking the movements in recent days of three Chinese combat ships, a replenishment vessel and an amphibious landing ship after observing them moving toward the Aleutian Islands, which are split between U.S. and Russian control.

“This would be a first in the vicinity of the Aleutian Islands,” one defense official said of the Chinese ships, which have been operating in international waters. “I don’t think we’d characterize anything they’re doing as threatening,” the official said.

[…] The Pentagon official said there were a “variety of opinions” on how to interpret the Chinese ships’ deployment.

“It’s difficult to tell exactly, but it indicates some interest in the Arctic region,” the official said. “It’s different.” [Source]