Diplomacy in the Time of Repression 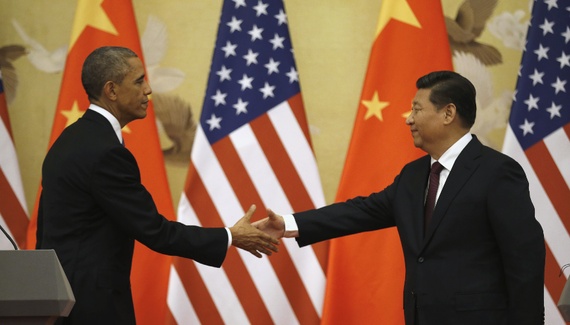 Xi Jinping’s first state visit to the United States begins on September 22 in Seattle, will take the Chinese president to Washington on September 24 for two days at the White House, and will conclude in New York on September 28 with his attendance at the 70th UN General Assembly. The trip comes as the Xi administration is engaged in an ongoing crackdown on human rights activism and the freedom of speech, and as the state legislature has recently passed or proposed several laws aimed at minimizing dissent and reinforcing Party ideology. At the Wall Street Journal, Center for New American Security president Richard Fontaine warns that it would be a mistake for U.S. diplomats to “relegate human rights to the periphery” in discussions with President Xi:

Amid discussions of the Chinese economy, cyberattacks and tensions in the South China Sea, President Obama should note that supporting human rights isn’t a matter of imposing American will or exporting Western values, but of affirming the principles of China’s own constitution and international commitments.

U.S. officials should address both individual cases, like that of imprisoned Nobel laureate Liu Xiaobo, and broader trends, such as the crackdown on lawyers and pending security legislation. These concerns should be raised in both private meetings and in public.

U.S. efforts to support human rights in China should be aimed not merely at cajoling Beijing into improving its practices, but also at demonstrating to the Chinese people that America stands beside them. On fundamental human rights, the people of China—and America—should know where Washington stands. [Source]

After noting the planned closure of Lafayette Square in D.C., where several groups were to hold protests while Xi is nearby visiting the White House, The Washington Post calls on U.S. officials to demonstrate commitment to free expression and human rights by not only allowing such protests to occur, but by highlighting their occurrence:

ONE OF the things we hope Chinese President Xi Jinping takes away from his visit this month to the United States is the importance of free expression in a strong society. It’s a point that President Obama should stress in his meetings with Mr. Xi. And to show how America not just allows — but actually welcomes — this precious freedom, Mr. Obama might want to point out the windows of the White House to Lafayette Square, a prominent place for political protest in the nation’s capital. That’s assuming, of course, the White House doesn’t take a page from Mr. Xi’s playbook and shut down protests in the park, ostensibly for security reasons.

[…] Among those who want to gather across the street from the White House when Mr. Xi is in town are civil liberties activists and advocates for ethnic and spiritual minorities who are oppressed in China. Two groups applying for a permit to the National Park Service for Sept. 24 and 25 are the International Campaign for Tibet and Initiatives for China; representatives of the groups met last week with National Park Service and other officials to, as part of the permitting process, outline their general plans.

[…] Beijing has been unabashed in preventing peaceful demonstrations at events such as the anniversary of the massacre at Tiananmen Square or the Olympics. And there has been an alarming deterioration in human rights conditions under Mr. Xi as his regime has essentially declared war on the lawyers and activists who have spoken out against official wrongdoing and tried to protect the rights of oppressed minorities. The White House, already too timid in speaking out about the abuses, should realize it would be sending a terrible message if protests at Lafayette Square were curtailed in any way for whatever reason. Mr. Obama should tell the Secret Service that the park must stay open. [Source]

The international rights advocacy community has been pressuring diplomats on both sides of the Pacific to keep human rights on the forefront for the upcoming summit. Earlier this month, nine high-ranking members of international rights organizations—including Human Rights Watch, Amnesty International, Initiatives for China, and Freedom House—openly called on Barack Obama to meet with Chinese activists, sending Xi a ” clear, public message […] that his government must end its persecution of civil society.” At The Huffington Post, Tibet Action Institute director Lhadon Tethong similarly called on Obama to ramp up pressure over the situation in Tibetan regions of China. An open letter to Xi Jinping from PEN, signed by 44 leading Amercian writers and intellectuals, called for the release of high-profile Chinese journalists and writers currently serving as political prisoners, including Nobel Peace laureate Liu Xiaobo, journalist Gao Yu, and Uyghur intellectual Ilham Tohti.

At Quartz, Human Rights Watch China director Sophie Richardson explains some of the overt and covert means employed by Beijing to minimize criticism over human rights while Xi is on his state visit to the U.S.:

Some of the usual features of a high-profile state visit can’t help but remind one of the bare-knuckle tactics China employs at home. Chinese state media outlets will run advertising supplements in US media just as rosy and scrubbed as the propaganda featured domestically. China might use the visit to request the return of citizens wanted on corruption charges, causing one to ponder whether they can get humane treatment, a fair trial, or indeed any trial in China. Lafayette Park—just opposite the White House—will be closed on the days of the visit, perhaps for security reasons, perhaps for public relations reasons and perhaps at the request of China, which locks down critics and routinely sweeps public gathering places of any possible protest for major events.

But Chinese authorities are also preparing for the visit in ways that aren’t so visible. Some Chinese students will no doubt be compelled to cheer Xi’s arrival (though some may also do so willingly). Activists and their family members in China and in the US have been told by Chinese authorities not to participate in protests during the visit, threatening unspecified consequences. Radio Free Asia correspondent Shohret Hoshur, a US citizen who reports from Washington on developments, including human rights abuses, in his home province of Xinjiang, knows this problem all too well: his brothers are being prosecuted in Xinjiang in clear retaliation for his work.

Two other events reflect growing sophistication by Beijing in selling the Chinese government’s version of reality to a well-informed and powerful audience. On Sep. 17, Washington’s high temple of policy discussions, independent bookstore Politics and Prose,  hosted Chinese Ambassador to the US Cui Tiankai and a “very senior Chinese government official not yet specified” for a discussion of President Xi’s book on governing China.* To be clear, there’s nothing wrong with Politics and Prose hosting such an event, but the fact that Chinese government officials sought this venue reflects a far more nuanced understanding of how to influence policy-savvy Washingtonians—who should bear in mind no such event could happen in China. […] [Source]

Last week, the release on bail of scholar and activist Guo Yushan after nearly a year in detention was interpreted as a “diplomatic card” played by Chinese authorities to deflect potential criticism over their rights record. At The Diplomat, Shannon Tiezzi rounds up other preemptive and planned measures by Chinese authorities and state media to defend Beijing’s human rights record ahead of Xi’s U.S. trip:

Against a backdrop of international criticism, China defended its contribution to human rights this week. The annual Beijing Forum on Human Rights, held from September 16 to 17 this year, showcases China’s commitment to and progress on the issue of human rights just before Chinese President Xi Jinping makes his first state visit to the United States.

In a congratulatory letter to the forum, Xi wrote that “the Communist Party of China (CPC) and the Chinese government have always honored and protected human rights,” according to Xinhua. Xi added that “China has been promoting economic and social development, improving people’s well-being, and toughening legal protection of human rights, among other efforts.”

China will also attempt to showcase its bona fides on human rights issues when Xi attends the United Nations General Assembly from September 26 to 28. In particular, Xi will chair a Global Leaders’ Meeting on Gender Equality and Women’s Empowerment. China’s Foreign Ministry said the event was tied to the 20th anniversary of the Beijing World Conference on Women. […] [Source]

For more on human rights, diplomacy, and Xi Jinping’s 2015 state visit to the U.S., see prior coverage via CDT.