Xi in the U.S.: Goldilocks and the China Bears 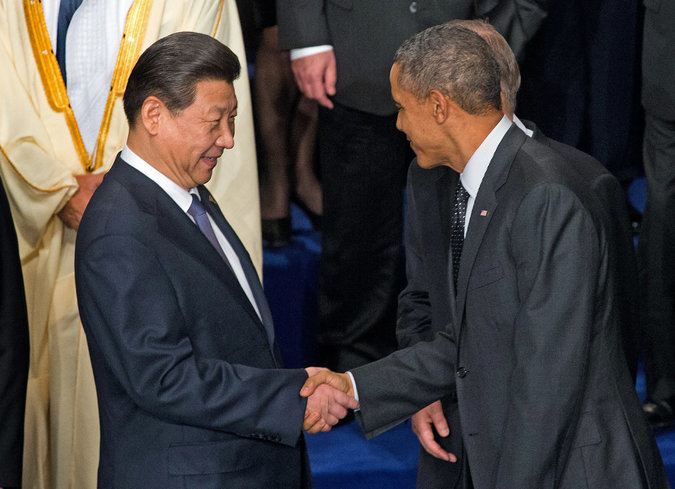 President Xi Jinping is set to begin his first state visit to the U.S., with stops in Seattle, New York, and Washington, D.C. Evan Osnos outlines the state of relations between the two countries in an article in the New Yorker:

Xi arrives just as both countries are experiencing a wave of nationalism. Last month, after a drop in China’s stock markets and a devaluation of its currency triggered a plunge on Wall Street, Donald Trump, the Republican Presidential front-runner, called on President Obama to cancel Xi’s gala and “get him a McDonald’s hamburger.” Trump also demanded “a big uncoupling” of the two economies, and tariffs on Chinese imports of up to twelve per cent. “They want our people to starve,” he told Fox News. “They’re taking our business away.” Despite the fact that China is now America’s third-largest export market, other candidates followed suit. But the impact of the campaign rhetoric has been limited in China, where hardly anyone had previously heard of Trump, or Chuanpu, as he is known in Mandarin, and the Global Times, a state-run newspaper, reassured its readers that, during election seasons, American politicians frequently discover that criticizing China is “not only good for shock value but also safe for them; candidates can treat it as a useful tool with no consequences.”

Recently, China has sent its own wary, often conflicting messages to the United States. As the economic boom has slowed, the Party has promoted an alternative source of legitimacy, emphasizing the Communists’ triumph in ending a “century of humiliation,” suffered at the hands of Japan and Western imperial powers. Fearful that Western values will undermine its rule, the Party is considering a new law that would constrain nongovernment organizations—including even ones as apolitical as study-abroad programs. People’s Daily, the Party’s official mouthpiece, maintains an online page entitled “America’s Strategy to Contain China Will Never Change.” Since Xi took office, in 2012, government-run media outlets have escalated warnings about foreign “hostile forces” conspiring to destabilize Hong Kong. [Source]

Observers are not expecting Xi and President Obama to make major headway on a number of challenging topics on the agenda—including cybersecurity, disputes in the South China Sea, and human rights. But smaller gains may yet be made, including during the Seattle leg of his journey, when he plans to focus on business ties and have more people-to-people interactions. From Jeremy Page at the Wall Street Journal:

“[Xi] wants to create an image of being close to the people, including in contacts with ordinary Americans,” said Zhang Lifan, a Beijing-based historian and political commentator. “He wants to win the affection of the American public.”

In briefings on Mr. Xi’s visit this week, Chinese officials gave no details of his Tacoma visit, but Foreign Minister Wang Yi said in a speech on Wednesday that: “A major highlight of President Xi’s visit to the U.S. will be his interactions with the American people.” [Source]

Despite his efforts to ingratiate himself to the American public, , Xi is coming to the U.S. in a weaker position domestically than he was when Obama visited China a year ago, with skepticism mounting over some of his policy decisions. Chris Buckley and Jane Perlez of the New York Times report:

Often described as the most powerful leader of the Chinese Communist Party in generations, Mr. Xi is to arrive in the United States on Tuesday facing economic headwinds and growing doubts about his formula for governing — a sharp contrast with the image of unruffled control he projected when he hosted President Obama last year.

Yet he has shown no sign of retreating on an array of disputes that have bedeviled the Obama administration, including those about accelerated construction in disputed waters of the South China Sea and cyberattacks attributed to China that have targeted American businesses and government agencies. China has repeatedly denied having a role in those attacks.

Analysts say Mr. Xi’s recent setbacks will only reinforce his reluctance to offer concessions under pressure from the United States.

“Xi is obsessed with strategic rivalry with the United States,” said Shi Yinhong, a professor of international relations at Renmin University in Beijing. “The summit won’t produce progress on strategic matters.” [Source]

For their part, many in the U.S. place China in a “Goldilocks” dilemma, where both its success and failures are viewed as threats, reports Kristine Kwok of the South China Morning Post:

For years, China’s economic boom has been blamed for causing job losses and declining exports in the US. American politicians criticise Beijing for deliberately keeping the yuan at an artificially low level.

But when mainland stock markets tanked and signs pointed to a slowdown in economic growth over recent months, new concerns emerged.

“There is concern that the only thing worse than China doing too well is China not doing well enough,” deLisle said.

But James Mann argues that U.S. policymakers and the public are caught in an outdated approach to dealing with China. From the Washington Post:

As Washington prepares for a visit from Chinese President Xi Jinping next week, American thinking about China seems stuck on concepts developed in the 1970s, ’80s and ’90s. Since that time, however, China has evolved in ways that few, if any, in Washington saw coming. It has become more assertive overseas, more repressive at home and more mercantilist in its trade practices than was anticipated two decades ago. Back then, American leaders regularly predicted that trade and prosperity would produce a more open China, one that would ease into the existing international system created under U.S. leadership.

Yet even as China moves in new directions, we use the mindset of the past when we talk about it. We continue to draw on ideas dating to Richard Nixon’s opening — even though it seems likely that Nixon himself, were he alive today, would take a much tougher stance toward China than he did in 1972.

(James Mann has been advocating a shift in U.S. policymakers’ approach to China for years; see a 2007 interview with CDT in which he states, “I’ve been increasingly saddened to see that America’s public discourse about China still operates with many of the same assumptions, the same rationalizations, the same vocabulary as it has for decades – above all, the notion that China is inevitably destined for far-reaching political change.”)

With a number of thorny issues to tackle, few observers harbor hope that significant progress will be made and are instead looking for smaller-scale agreements. Andrea Chan writes in the South China Morning Post that it’s, “unlikely President Xi Jinping and his American counterpart Barack Obama will reach any substantive agreements on the most contentious issues dividing their two nations, such as cybersecurity and increased tensions in the South China Sea”; meanwhile, for the Council on Foreign Relations, Elizabeth C. Economy outlines three areas that she expects the U.S. won’t cede the outcomes that China desires, namely: “acceptance of Chinese security priorities, respect for China’s political system, and recognition of a new international order.” Carrie Gracie of the BBC agrees that we can expect little in terms of substantive agreements, but also that this summit put in its historical context is alone a reason for hope:

A game of brinkmanship is afoot and on cyber-hacking and contested atolls, it would need a reclamation project bigger and swifter than the one under way in the South China Sea for guest and host to find a piece of common ground to stand on.

But spin it another way and there should be something to celebrate.

Four and a half decades, five Chinese communist leaders, eight American presidents, and a transition from a world in which China is isolated and marginal to one in which it is increasingly able to meet the United States on equal terms.

And through it all, the US-China relationship has broadly held to the course that President Nixon set out in 1972 as he prepared to travel to Beijing to end two decades of enmity:

For the Brooking Institute, Jeffrey Bader also puts the visit into a historical perspective to argue against viewing it as beset by unique complications—as all visits by Chinese leaders come with their own set of challenges and tensions:

So one should be skeptical that a visit by a Chinese president comes at a uniquely difficult time and that the stakes are critical. In fact, the nature of the U.S.-China relationship is such that visits to Washington always seem to come at uniquely difficult times. Another common characteristic is that the Chinese come hoping for a smooth visit with high protocol, minimal substance, and no disagreements. The American side, meanwhile, argues that without major steps to address (our) grievances, the relationship will be set back and the visit will be a failure. That has been the subtext of this Xi visit as well. [Source]

One evergreen topic that arises in some capacity during every China summit is the treatment of political prisoners and other Chinese activists. With the ongoing crackdown on the media and civil society groups since Xi took power in 2012, the issue has gained renewed urgency this year for many. Jeffrey Herbst, CEO and president of the Newseum in Washington, D.C., writes in the Wall Street Journal that his museum will broadcast messages in Chinese on the building facade “demanding freedom in China.” The Washington Post’s Fred Hiatt calls on Obama to leave seats at the state dinner for imprisoned writers and activists, and PEN’s Suzanne Nossel writes in the Los Angeles Times that Obama should send a clear message in defense on China’s dissidents and activists:

Western university presidents, like-minded governments, newsroom executives and studio moguls need to hear that doing business with the Chinese should not mean caving in to Beijing. [Source]

China Change posted letters from rights defense lawyers in China to Obama on the eve of Xi’s visit, with their suggestions of how to broach human rights issues during the summit.

See also the Wall Street Journal’s interview with Xi Jinping, who responded in writing to questions on a number of topics, including the crackdown on free expression and the Internet:

Freedom and order must be upheld side by side in both cyberspace and the physical world. Freedom is the purpose of order, and order the guarantee of freedom. We need to fully respect netizens’ rights to express themselves, while at the same time, ensure a sound cyberspace order to better protect the lawful rights and interests of all netizens. China’s Internet is booming, providing immense opportunities and market horizon for businesses around the world. We welcome all foreign companies in China and will respect and protect their lawful rights and interests provided that they abide by the laws and regulations of China and do nothing to undermine China’s national interests and interests of Chinese consumers. The international community as a whole should work together to build a peaceful, secure, open and cooperative cyberspace on the basis of the principles of mutual respect and mutual trust.

China recognizes the positive role of foreign nonprofit organizations (NPOs), welcomes and supports their development in China, and stands ready to provide them with necessary facilitation and assistance. Taking seriously the provision of services to and regulation of foreign NPOs in China, we will regulate, in accordance with law, their activities and protect their lawful rights and interests. All foreign NPOs should obey Chinese law and carry out their activities on a law-abiding and orderly basis. [Source]

Xi’s detailed itinerary, topics on the meeting agendas, and historical context for the summit meetings can be found via the New York Times and South China Morning Post.