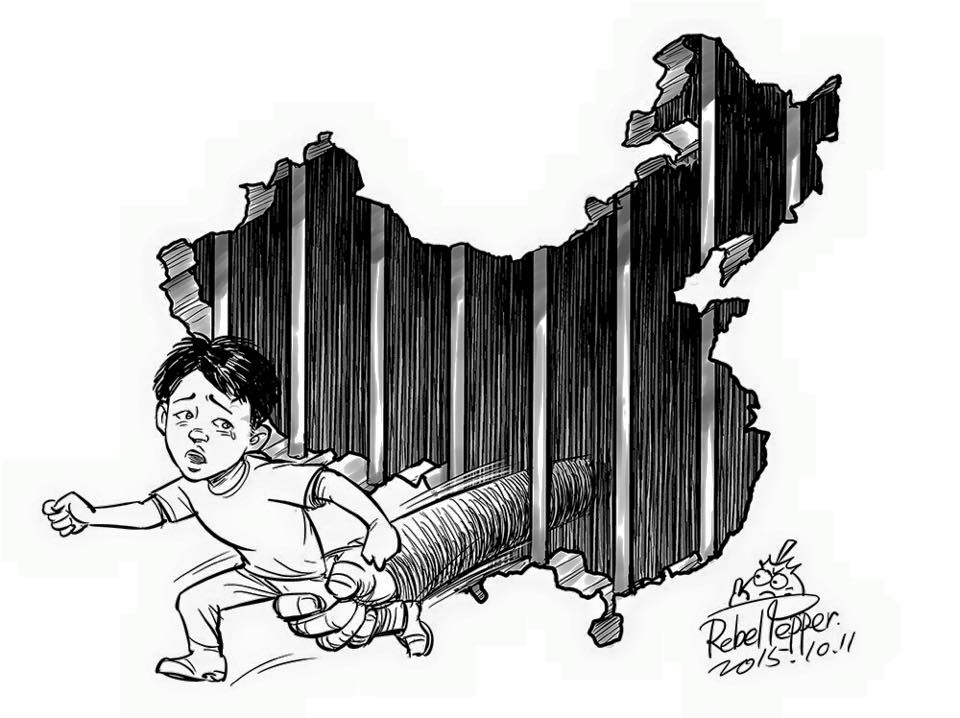 Rights lawyer Wang Yu and her husband, activist Bao Longjun, have both been detained in undisclosed locations since July’s “Black Friday” crackdown. Wang was taken from her home, and Bao from the airport as their 16-year-old son Bao Zhuoxuan waited to fly to Australia to attend school. Bao Zhuoxuan’s passport was confiscated, and he was taken to his grandparents’ house in Inner Mongolia. On October 9, he was detained along with rights activists Tang Zhishun and Xing Qingxian in Mong La, Myanmar, a special border region where travel documents aren’t required to enter as a tourist from China. The three were reportedly waiting to travel to Thailand to meet San Francisco-based activist Zhou Fengsuo, who planned on helping the boy apply for asylum in the United States.

Foreign media have since reported that the younger Bao is under house arrest at his grandparent’s home in Inner Mongolia, and is being prevented from talking to journalists. Some commentators suspect that the boy has become “collateral damage” in the ongoing crackdown on civil society, with authorities planning to use him as a “‘hostage’ to negotiate” the cooperation of his detained parents. The AP’s Didi Tang notes that this strategy is not unprecedented. As a U.S. State Department spokesperson cited reports on Bao in calling for Beijing to remove restrictions on his movement and release his parents from custody, the English-language Global Times attempted to flip the narrative, lashing out at the foreign media for “fabricating” details of the story, and claiming that a plot by “external forces” had entangled the boy in a political dispute:

News that Bao Zhuoxuan, the 16-year-old son of detained rights lawyer Wang Yu, had gone missing in Myanmar has been hyped by the Western media in recent days. Local police in Yunnan Province told the Global Times that two men played tricks to win Bao’s trust and smuggled him into the chaotic region of northern Myanmar. The teenager’s guardians opposed his studying abroad.

The police presented us with testimony from the guardians. Bao is still under age, and legally he has no capacity to make important decisions. The police also said that Bao is innocent although his parents are suspected criminals. As long as his guardians permit, he could go abroad for study through proper channels. Bao now is being taken care of by his guardians in Inner Mongolia, and has been enrolled into a local school. The Western media claimed that Bao’s legitimate rights had been severely invaded, including being threatened and harassed. The police flatly denied such accusations.

[…] Why did overseas forces hastily smuggle Bao to the turbulent region of northern Myanmar shortly after his parents were arrested? Would those who really care for the teenager throw him in such danger? The only explanation is that this was a plot by external forces, who forcibly drew a minor into the vortex of politics and used the case to vilify China’s rule of law. What an emotional story that a teenager, after his parents were arrested, fled to the free world of the West by the way of a war-torn region with the aid of “democratic activists.”

[…] Bao’s case sends us a warning that some external forces are expecting each moment to make an issue of China’s rule of law. They even fabricate the dark side. The Chinese police should handle cases strictly in accordance with the law. If Western forces wage public opinion attacks by publishing false stories, we should be able to clarify the facts in short order. [Source]

Chinese newspaper Global Times has hit back against “overseas anti-China forces” for attempting to help the son of a detained human rights lawyer flee to the US via southeast Asia.

The newspaper, run by state-owned People’s Daily, also attacked “anti-China websites and Western mainstream media” for “hyping up the story” after the teenager was arrested and deported back to China.

[…] In a report published on Thursday, Global Times said the New York Times and other Western media made the story up to “attract eyeballs.”

“Stories like this will no doubt attract the attention of many people who don’t know the truth. [They also] blacken China’s image immensely.”

[…] The report said Bao, and two adults who accompanied him, confessed to illegally crossing the border. [Source]

The Global Times’ Chinese coverage also denies that the teenager is being held under house arrest, and contains an purported quote from Wang Yu alleging that he was smuggled to Myanmar against his family’s will. The South China Morning Post’s Jun Mai reports, noting doubts over the validity of the state media narrative:

His mother was quoted in the article as telling police she was not aware of the smuggling plan and that she was against it. “I will draw a clear line between myself and the people who plotted this. I can settle my own business,” she was quoted as saying.

[…] San Francisco-based activist Zhou Fengsuo, who was waiting for Bao in Thailand to help with his asylum application to the US, cast doubt on the state-run media report. “We shouldn’t forget that Wang is not free at the moment and she hasn’t been allowed to see her lawyers after her arrest,” Zhou told the South China Morning Post.

“I think the best choice would be to give him [Bao] his passport and let him make his own choice,” Zhou said.

He added that Bao had repeatedly said he wanted to study in the US. Zhou’s concerns were echoed by Li Yuhan, Wang Yu’s attorney, who has made repeated attempts to visit his client over the past two months, but with no success.

“I don’t believe the report. Wang Yu has been completely cut off from the outside world,” Li said. Tianjin police have said they were handling Wang’s case, but have refused to reveal her whereabouts or allow lawyers to see her, Li said. […] [Source]

On Twitter, lawyer Liu Xiaoyuan, a colleague of Wang Yu’s at the Beijing Fengrui Law Office, notes that his children have also been barred from studying abroad, as have the children of another firm member.

Radio Free Asia cited anonymous sources who claimed that Chinese authorities relied on ethnic rebels friendly with Beijing to detain Bao Zhuoxuan and his two adult guardians from Myanmar. The Guardian and Reuters provide more details on China’s shoring up of allies in Myanmar to bolster Beijing’s regional interests.