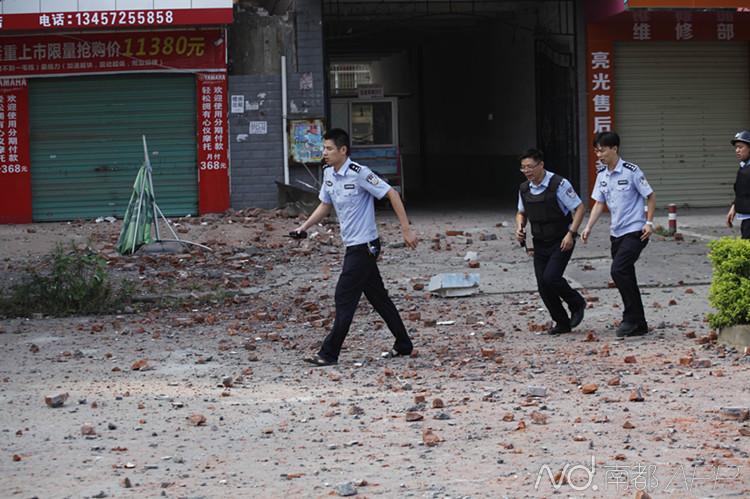 Central Propaganda Department: The media must not send reporters to cover the series of explosions that occurred in Liucheng County, Guangxi and surrounding areas without permission, and must not set up special topic [coverage]. If covering the incident, use dispatches from sources such as Xinhua News Agency as the norm.

Cyberspace Administration of China: Regarding the explosions that occurred in Liucheng County, Liuzhou, Guangxi, websites nationwide may only use one picture taken from a long distance. All close-range photographs must be deleted without exception, including Weibo and WeChat. Please deal with this immediately.

X Province Propaganda Department: Regarding the explosions in Liucheng County, Guangxi, republish only authoritative sources such as Xinhua News Agency. Do not independently gather or edit [information]. Do not compile and post information on Weibo or WeChat, do not offer special topic [coverage], do not live broadcast video. Violators must immediately redress this and delete [the offending content], no exceptions. News clients and cell phone WAP websites must also implement these directives. Interactive platforms must not hype, gather, or recommend related information. [Chinese]

Multiple parcel bombs went off in Liucheng, Guangxi yesterday afternoon and today, killing at least seven and injuring 51. No casualties have yet been reported after today’s explosion. The police have identified a suspect in yesterday’s bombings, a local man named Wei Yinyong who apparently hired people to deliver packages that would explode on opening.

Package delivery has been suspended until October 3 in Liuzhou, the prefecture-level city which contains Liucheng. The Wall Street Journal’s Te-ping Chen reports difficulty in reaching locals for comment:

A man answering the phone at a local courier-service company said that they had been temporarily ordered to cease operations and not told when they could resume. He said that police had warned locals not to trust strangers and hung up the phone.

The Liuzhou Internet police have acted swiftly to control the social media response to the incident:

The text in the screenshot reads as follows:

Hello, we are the Liuzhou Internet police. You posted a message around 5:10 p.m. today stating, “There were explosions in Liucheng. The local government [building] was blown up. The train station was blown up.” This content contains false information. We are still waiting for the actual situation to be verified. Exaggerated wording can cause mass panic. Please remove the related Weibo post as soon as possible, and follow official sources for updates.

The explosions began the day before National Day and the start of Golden Week, when millions of Chinese flock to trains and tourist spots on vacation.

Meanwhile, some noticed that news of Thursday’s mass shooting at Umpqua Community College in Oregon was highlighted in the Chinese media, in contrast to the news from Liuzhou:

Sina, other Chinese sites have rolling news sections on Oregon shootings. Ones on bombings in Guangxi were shut down. pic.twitter.com/DBcqoTj2Eh