Police in China Kill 17 Linked to Mine Attack 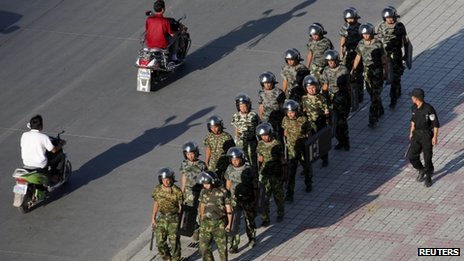 Authorities in the Xinjiang Uyghur Autonomous Region have killed 17 people, including women and children, for their alleged involvement in September’s coal mine attack in Aksu that left to at least 50 dead. Reuter’s Ben Blanchard reports:

The government has made no public comment about the Sept. 18 attack at the Sogan colliery in Aksu, with Radio Free Asia reporting most casualties were members of the Han Chinese majority and police blaming knife-wielding separatists.

Radio Free Asia, citing Xinjiang police, said the 17 killed were all suspects in the attack, including three men believed to have been the ringleaders and their family members.

[…] “I heard from colleagues who participated in the operation that the military blew up the cave where the suspects were hiding,” the report quoted Xinjiang police officer Ghalip Memethe as saying.

“That is why we were able to kill all of them with zero victims [from our side]. Seventeen corpses were gathered after the explosion.” [Source]

Just as the Chinese government has tried to keep news of the Aksu mine massacre in check, authorities in Xinjiang did not respond to requests for details about the suspects killed in the assault. Javier C. Hernandez at The New York Times reports:

In keeping with its practice of tightly controlling information about violent incidents in Xinjiang, the government did not provide details about the people killed in the raid or the crimes they were accused of. Officials in Xinjiang declined to comment.

Human rights advocates criticized the government’s handling of the incident, saying Chinese officials should be more forthcoming about those killed in the raid, especially since children were among the dead.

“It’s long past time for Beijing to stop monopolizing the reporting on terrorism and its counterterrorism efforts,” Maya Wang, a researcher for Human Rights Watch in Hong Kong, wrote in an email. “If these operations are indeed lawful as China claims, then it should have nothing to hide.” [Source]

Following the terrorist attacks in Paris last weekend, Chinese President Xi Jinping called for increased counterterrorism efforts and asked the international community to work with China in its fight against separatists in Xinjiang.