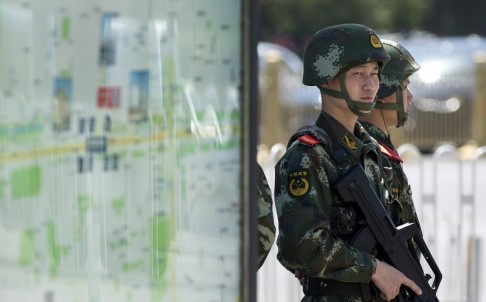 Mr. Xi told Mr. Hollande: “This is a traumatic time for the French people, and on behalf of the Chinese government and people, and in my own personal capacity, I condemn this barbarous action in the strongest possible terms, express my profound grief for the victims, and offer my sincere condolences to the injured and to the bereaving families of victims.” Mr. Xi also said: “China has consistently opposed all forms of terrorism, and is willing to work with France and the international community to strengthen security cooperation and to fight terrorism together, safeguarding the lives of people of all countries.” [Source]

In the wake of the tragedy in Paris, Chinese authorities have sought to link the events in France with its own fight against terrorism. Over the weekend, Chinese officials called for all government departments to intensify their counterterrorism efforts and prepare to mount a stronger national response against potential terrorist threats within the country. From Wendy Wu at South China Morning Post:

Public Security Minister Guo Shengkun, who also heads the national leading group on counterterrorism, told a video conference held jointly by the group and the ministry that all departments should boost their preparedness and early-warning systems against terrorism to safeguard public security and social stability, Xinhua reported, citing a ministry statement.

[…] Guo urged officials to “intensively strengthen analysis and research on anti-terrorism intelligence” to ensure “precise strikes and enhanced capacity in early-warning, precautionary and prevention measures, and to make efforts to smash violent terrorism before it occurs”. He also pledged “high pressure and deterrence against violent terrorism” and to push ahead with the counterterrorism campaign. [Source]

Guo’s call follows the launch of a long-term anti-terror campaign last May, implemented by the Xi administration following a series of attacks throughout the country that authorities have blamed on separatists and religious extremists from Xinjiang. These attacks, which have claimed hundreds of lives, have been officially labeled acts of terrorism inspired by the global jihad movement emanating from the Middle East. Last December, official media reported that 300 “Chinese extremists” have travelled to Syria and Iraq to fight with the Islamic State.

At this week’s G20 summit in Turkey, Chinese officials called on the international community to cooperate with China in its fight against the East Turkestan Islamic Movement, a Uyghur group that seeks to establish an independent state called East Turkestan. Reuter’s Ben Blanchard reports:

Speaking in Turkey on Sunday on the sidelines of the G20 summit, Chinese Foreign Minister Wang Yi called on the international community to form a “united front to combat terrorism” in the aftermath of Paris attacks, state news agency Xinhua said on Monday.

“The UN’s leading role should be brought into full play to combat terrorism, and a united front in this regard should be formed,” Wang said.

“China is also a victim of terrorism, and cracking down on ETIM should become an important part of the international fight against terrorism,” he added.

Both the United Nations and Washington placed ETIM on lists of terror organisations after the Sept. 11, 2001, attacks in the United States.

President Xi Jinping also emphasized at the summit that there should be no “double standards” in fighting terrorism. From Chris Buckley at The New York Times:

Later, during meetings with other Group of 20 leaders gathering in Antalya, Turkey, Mr. Xi obliquely pressed the argument that other countries should back the Chinese government’s policies on terrorism. These include the contentious position that increasingly deadly conflict in Xinjiang, an ethnically divided region of western China, is the work of separatist forces under the spell of religious extremism.

“Step up cooperation in counterterrorism. Both symptoms and root causes must be addressed,” Mr. Xi said on Sunday. “There must not be double standards.” [Source]

“Today, Paris encountered the most serious terrorist attacks in its history,” said a post dated Saturday on an official account owned by the Chinese police ministry on the microblog service Weibo. “Today, Chinese Xinjiang police made an important achievement against terrorists after a 56 day fight!!!”

The photo-filled post showed police clad in black uniforms toting heavy weapons on rugged mountain passes, breaking into a rustic home and sleeping off exhausting missions. It said the mission happened in September, around the same time some media have reported that a deadly attack took place in the country’s restive far western region of Xinjiang.

[…] The unusual peek at antiterror police on patrol in China was widely shared by users of Weibo — often with some criticism that an association to the Paris tragedy was in bad taste. By Sunday the message had vanished from the Weibo feed along with most of the comments and re-posted versions. [Source]

A letter shown as part of the pictures says that after a 56-day battle, “it finally ended at 4:40pm today”.

Parts of the letter were pixelated out and warned that those who perpetrated violence will be severely dealt with.

It was not clear when the pictures were taken nor where exactly. China hardly ever shows pictures taken of its forces engaging in anti-terror operations. [Source]

Photos from the deleted Weibo posts, via Quartz: While Chinese authorities blame Xinjiang separatists and Islamic militants for violence in the region, exiled Uyghur activists point to Beijing’s heavy-handed ethnic policies as the real cause of unrest in Xinjiang. Jun Mai at South China Morning Post reports:

Overseas Uygur activists have long condemned Beijing’s ethnic and religious policies in the region as repressive, but the central government insists there is religious freedom and the perpetrators of violence are jihadists seeking independence.

Li Wei, director of the counterterrorism research centre at the China Institutes of Contemporary International Relations, said the nation faced an increased terror threat but attacks like the one in Paris were unlikely.

“With the rise of ISIS and as more Chinese nationals are smuggled over the border to join it, China faces a bigger threat of terrorism,” Li said. “[But] it’s harder to obtain tools and China has a tighter control over terrorist activities,” Li said. [Source]

Alongside the ongoing crackdowns on alleged terrorist activity, authorities in China have enacted a range of religious and cultural restrictions on Uyghurs living in Xinjiang while promoting visions of ethnic unity and coherence.

In January, after the attack on Paris-based satirical magazine Charlie Hebdo prompted international cries in support for the freedom of expression, Chinese state media issued a wave of editorials on how the killings show the need for limits. Also see a ChinaFile Conversation from January asking experts to weigh in on why China has been less successful than France rallying international sympathy after deadly attacks.