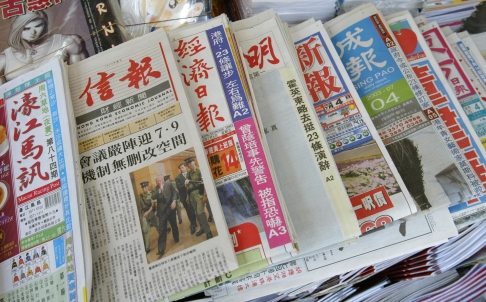 For The Diplomat, Freedom House’s Sarah Cook gives a rundown on the situation for Chinese media in 2015, a year which, she says, “may have marked the end of an era in Chinese journalism”:

The Guangdong-based Southern Media Group has been hit especially hard. Last January, former Southern Weekly journalist Fang Kecheng lamented the failure of 2013 protests by reporters and others who sought to combat censorship at the paper, one of the country’s most influential liberal news outlets and a pioneer of serious investigative journalism in China. Fang said censorship demands had mounted since the protests, and an exodus of experienced journalists to various internet start-ups ensued.

In April, authorities revoked the publishing permit for Money Week and shut down the website of the 21st Century Business Herald. Staffers from the two Southern Media Group outlets had been detained in 2014 under allegations of extortion. In August, Guangdong authorities published a report listing various new requirements that had been imposed on the company, including an increase in the percentage of CCP members among its employees. In September, three of the group’s papers ran glowing coverage of a military parade held in Beijing, one of the CCP’s largest propaganda events of the year.

The final blow of 2015 came on Christmas Eve, when Shen Hao, the former chairman of the company’s 21st Century Media unit and a former Southern Weekly editor whose idealism and professionalism inspired a generation of journalism students, was sentenced to four years in prison on extortion charges that many colleagues believe to be fabricated. Amid the Southern Media Group’s political tribulations and falling readership, what was once among the most successful commercial media companies in China has reportedly been forced to accept millions of dollars in government subsidies. “The case of the 21st Century group showed that journalism has been annihilated in China,” Cheng Yizhong, a prominent journalist who has served time in prison for his reporting, told the Washington Post. “The ruling party has won the war it started in 2003, completely.” [Source]

A primary way Chinese authorities control media coverage is through official directives issued to editors, website managers, and reporters, which include instructions on how to cover—or not cover—breaking news stories. CDT collects and translates these propaganda orders in our Directives from the Ministry of Truth series. For Foreign Policy, Sarah Cook analyzed all the directives published by CDT in 2015 to see which topics were the most heavily censored throughout the year:

We analyzed all 75 leaked directives published by the California-based website China Digital Times (CDT) in 2015 that ordered “negative” actions such as deleting an article, declining to send reporters, excluding a topic from website homepages, or closing the relevant comment sections. It is difficult to verify the orders’ authenticity beyond the efforts of CDT staff, but the leaked documents often match visible shifts in coverage and are generally treated as credible by observers of Chinese media.

This collection of available directives is not exhaustive. In fact, it may only be the tip of the iceberg; one leaked order from the party’s Central Propaganda Department in September was listed as number 320 for the year. Nevertheless, an examination of the orders can provide insight into what content the party considered most sensitive. [Source]

The six topics that Cook found were most heavily censored include: Health and safety, Economics, Official wrongdoing, Media and censorship, Party and official reputation, and Civil society.

If the Internet has imposed itself as the place of freedom where resistance to censorship in China is expressed, it is also spreading the battle beyond our borders at a time when Chinese state-owned companies are networking around the world and when Confucius Institutes for the promotion of Chinese culture and language are being established in many different countries. Soon, the shadows of censorship will not only hang over we Chinese citizens, but will also catch up to you who are living far away, always believing you are safe from its reach.

About two years ago, a London magazine asked me to write an article. On its website, I saw all kinds of articles praising the Chinese Communist Party. It was not really my thing. I asked them why they published all this propaganda. The editor explained: “We have no choice. Some of our major clients are Chinese companies. If we publish too many articles that criticize the Communist Party and the Chinese government, they will just stop placing advertisements for us.”

I know that phenomenon also exists among other European countries as well as Hong Kong, the United States, Australia and even in Africa. Sydney has already more than six newspapers in Chinese language. Most of them are close to the Chinese government, even if it doesn’t control them directly. Articles and comments that are published and directly inspired by its propaganda openly praise the powers that be in Beijing. Hence, Communist party and Chinese government officials are already speaking out on Australian soil. Most might not even notice it.

[…] Civilization is an indivisible whole. When the government of a country begins to attack it, to gag it, to destroy it knowingly, it doesn’t only affect its people but humanity as a whole. In these times of globalization, freedom of speech goes beyond any one country’s domestic policy. If you watch silently as a foreign government destroys books and arrests people within its country, and if you then get even closer, turning into a trade partner or political ally, without every expressing qualms, then that same government, sooner or later, will attack your own freedom of speech too. [Source]

In Hong Kong, a crackdown on publishers of political books has raised fears over China’s growing influence on freedom of speech in the territory. British leaders expressed concern over the fate of publisher Lee Bo, who disappeared last week, and called on China and Hong Kong to protect press freedom in the city.

Read more about China’s efforts to export censorship and influence the media in other countries.