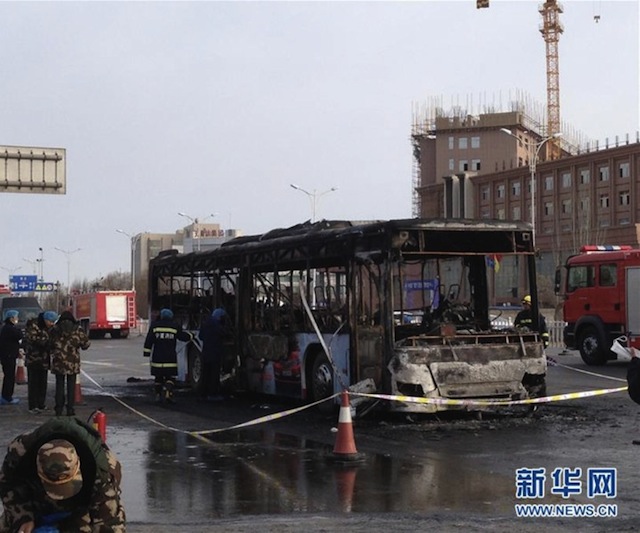 Concerning the bus fire in Yinchuan, Ningxia that left 17 dead, all news websites must take care to check through comments. You may close comments if necessary. Websites and the media must not release any speculative commentary before the authoritative mechanism comes to a formal conclusion. (January 5, 2016) [Chinese]

A public bus in Yinchuan, Ningxia caught fire this morning, killing 17 people and injuring 32. A man suspected of setting the fire was arrested later in the day. From Caixin’s Zhou Qijun:

Police in Ningxia said the suspect was 34-year-old Ma Yongping, and a manhunt scoured Yinchuan for him in the hours after the attack. Police published his phone and ID card number and the license plate numbers for the three cars registered to him in the hopes someone in the public would turn him in.

Ma was caught about 4:30 p.m. in the same county the bus blaze occurred in, Xinhua said. [Source]

Ma was arrested after he threatened to commit suicide, according to CCTV. The Beijing News reports that Ma acted to “retaliate against society” for a debt:

Around 7 p.m. today, the Yichuan police reported that they arrested Ma Yongping, a major suspect in the case of arson on the route 301 bus, at 4:23 p.m. According to initial findings, Ma Yongping (male, Han, 33 years old, resident of Dawukou District in Shizuishan, Ningxia) was upset over a dispute with a subcontractor over money owed for a construction project in the Hongguang Township Resettlement District in Helan County, and took extreme action to retaliate against society.

Ma confessed to committing arson in his first interrogation. Around 7 a.m. this morning, Ma climbed on top of a route 301 bus with two plastic buckets of gasoline purchased at a gas station in Shizuishan, Pingluo County. After igniting the gas with a lighter, he jumped away via the driver’s seat window and fled the scene. The case is currently in the process of being heard. [Chinese]

“Ecological migrants” (生态移民) from rural, mountainous areas of Ningxia have been resettled in Beimiao Village, Hongguang. The Ningxia Hui Autonomous Region resettled 350,000 people from 2011 to October 2015, according to a report saved to 360doc.com (the source page, apparently from the Guangming Daily, no longer exists). Poor migrants, primarily from Xiji County, have been relocated into new housing in Hongguang.