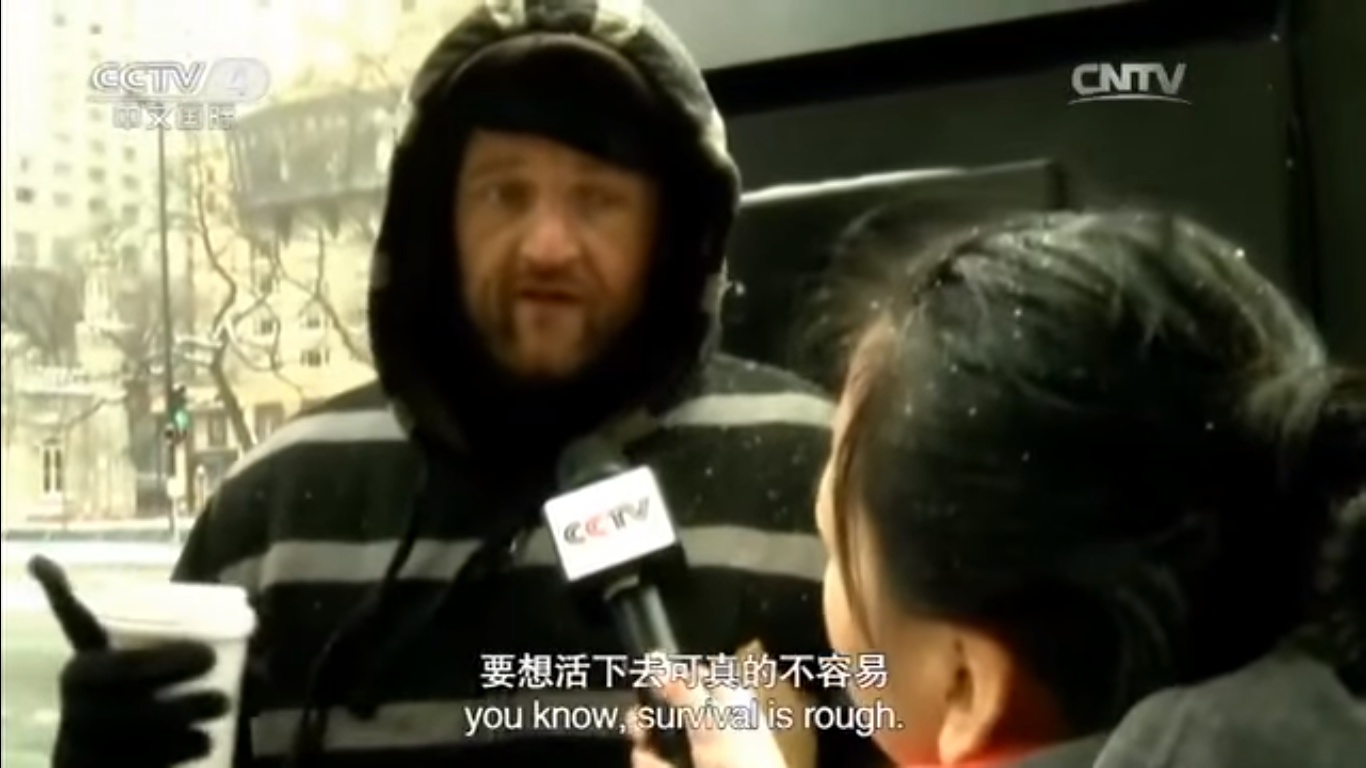 The Chinese government has recently intensified its pushback against U.S. criticism of its human rights record by broadcasting a documentary that tracks human rights abuses committed by the U.S. government from the Vietnam War through current times. From Zheping Huang at Quartz:

“While infringement on the human rights of other countries was intensifying, the US was waving the flag of ‘human rights diplomacy’ to realize its international political goals,” the narrator says. “Every country is a runner on this track” of improving its human rights, and “the US is no exception.”

Many of the issues raised in the documentary were thoroughly reported in the US when they occurred, and in most instances CCTV relied on that reporting or US government or UN data for its coverage. In many cases, Chinese citizens wouldn’t have seen this reporting when the abuses occurred, because the original news sources are blocked in China.

[…] The documentary was screened at least twice by CCTV, and has also been publicized by China’s state media, but it is hard to estimate how effective a piece of propaganda it has been. A post on the Twitter-like Weibo by state tabloid Global Times promoting the documentary got just over 1,000 re-posts and comments, a small number in China where popular posts get hundreds of thousands of reactions.

Many of them were critical of both the US and China. “Does the US have human rights problems? Yes. Does China have? Yes,” one blogger commented. “Both sides are trying to discredit the other party, but they cannot whitewash themselves.” [Source]

Both [Chang Jian and Liu Hainian] avoided answering a question about televised broadcasts of confessions by suspects, often those involved in sensitive human rights cases, which have angered the United States and Europe.

Liu admitted some websites were “probably” blocked or deleted in China, though said this was being done for the sake of protecting the country’s young people from pornography, gambling and drugs.

“I’m really worried about my grandchildren. I hope they can growth up healthily. This kind of information needs to be removed,” he said.

When asked why Chinese media were not allowed to rigorously criticize China’s rights record in the same way the U.S. media were able to do in their home country, Liu criticized instead U.S. reporters for their slanted view of China.

“Their reports on China are very few and very negative.” [Source]

In recent years, the U.S. and Chinese governments have routinely engaged in back-and-forth battles about the others’ human rights records, usually following the release of the State Department’s annual report on human rights around the world. This month at the United Nations Human Rights Council annual meetings, Chinese representatives rejected criticism from a group of countries, led by the U.S., over the recent crackdown on human rights lawyers, activists, and Hong Kong-based publishers.

Official media in China have also taken the presidential election as an opportunity to criticize not only the U.S. human rights record but its democracy, notably with a Global Times editorial slamming the campaign of real estate tycoon Donald Trump. Simon Denyer at The Washington Post reports:

The paper went on to argue that this election did raise some serious issues about America’s decline and hypocrisy. After noting the rise of Mussolini and Hitler, it said that most analysts believe the U.S. election system will prevent Trump from winning, so that “the process will be scary but not dangerous.”

But even if Trump is a false alarm, his rise has “left a dent” and left the United States facing “the prospect of an institutional failure.”

[…] Finally, then, the paper had this message for the United States.

“The U.S. had better watch itself for not being a source of destructive forces against world peace, more than pointing fingers at other countries for their supposed nationalism and tyranny.” [Source]

For his part, Trump has received pushback of his own after appearing to endorse the Chinese government’s violent response to protesters in 1989 (while also calling it “horrible”) and for calling the peaceful protest movement a “riot.” The June 4th military crackdown on protesters—and the government’s subsequent failure to publicly account for the resulting deaths—has been a constant source of friction between the U.S. and China and is frequently mentioned in U.S. human rights reports on China.

Cartoonist Rebel Pepper had his own take on Trump’s statements: