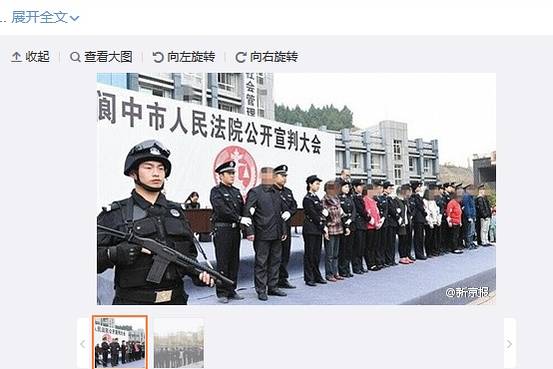 A court in Langzhong, Sichuan this week held an outdoor, public mass trial for eight migrant workers who last year protested in demand of unpaid wages. Labor protests have been rising in China as the economy continues to slow, and leaders have responded with a crackdown. At Reuters, Brenda Goh reports:

A Chinese court held an outdoor trial for eight migrant workers protesting against unpaid wages to “educate the public in law”, the state-run Beijing News reported on Friday.

Chinese courts occasionally hold public trials involving criminal offences such as drug dealing and robbery, but such trials for labor offences are rare.

The workers were charged with obstructing police during a protest they staged last year to claim unpaid wages from their employer, a developer, the paper said. The trial was held on Wednesday in Langzhong in southwestern Sichuan province. […] [Source]

All eight were found guilty, receiving sentences of between six and eight months in jail. At The Wall Street Journal, Chun Han Wong and Kersten Zhang report that the effort to “educate the public” with a public shaming tactic reminiscent of the Mao era  resulted in public outrage:

Many Chinese recoiled from the humiliation of pitiable migrant workers in a much-reviled and largely disused judicial practice. Legal experts, journalists and laymen alike launched into caustic criticism of the Langzhong court, calling its rally barbaric and an egregious violation of due process.

“Under the law, a court handling a criminal case should issue the verdict in ‘open court,’ and not in a public sentencing rally,” Yue Yaoyong, a veteran public prosecutor and legal journalist, wrote on his verified Weibo microblog.

[…] This incident shows that “there’s a long road ahead to establishing ‘rule of law,’” Mr. Yue wrote. “The legal professionalism of our judges and prosecutors is still sorely lacking.”

Activists, too, harshly criticized what they saw as the government’s attempt to intimidate workers and discourage them from exercising their rights.

[…] “Don’t take the public for fools. You think the people don’t understand your purpose in using public sentencing?” a Weibo user wrote in response to the propaganda office’s statement. “Let me tell you this: public sentiment is not to be bullied!” [Source]

Mass public sentencing has been commonly used amid an ongoing crackdown on terrorism focused on the Xinjiang region. For more on labor unrest, see prior coverage via CDT.