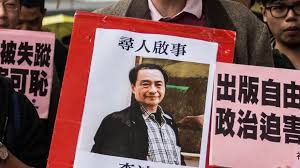 Cheung Chi-ping and Lui Por—two of the five employees of a Hong Kong publishing house and its affiliated bookstore who were detained in China—have returned to Hong Kong pending an investigation. A third colleague, Lam Wing-kee, is also apparently set for release on bail, while two others, Lee Bo and Gui Minhai, remain in detention. Since the five men disappeared late last year, and then appeared on TV with some “confessing” to illegally selling books in China, many questions have been raised about the circumstances of their detention and how Lee and Gui were transported to China from Hong Kong and Thailand, respectively. Those questions have intensified in recent days as emails that Lee reportedly sent to Gui’s daughter last year seem to counter his public claims that he traveled to China voluntarily to assist an investigation into Gui. From Anne-Marie Rountree at Reuters:

Lee wrote an email to Angela Gui asking if she knew that her father, who disappeared from the Thai beach town of Pattaya last October, had been missing for more than 20 days.

In the series of emails forwarded to Reuters by Angela Gui, dated from Nov. 10-15, Lee appealed to her to take her father’s disappearance to international human rights groups.

“According to (Gui’s wife’s) words retold by the watchman of the building, he left the apartment with several men who claimed to be his friends,” Lee said in the email.

“Perhaps you can do something, and there are a lot of (Gui’s) friends ready to help if you need them. Do tell me what you think and what you want us to do.” [Source]

Meanwhile, a former employee of Lee’s told journalists about his run-in with Chinese security several years ago that mirrored the treatment of Lee and colleagues. Oliver Chou and Phila Siu at The South China Morning Post report:

Woo, 75, who assisted Lee in managing the bookstore specialising in publications critical of the Chinese Communist Party, told the Post that the disappearances were all too familiar.

“I was taken away during my visit to a dentist in Shenzhen,” an agitated Woo recalled.

He remembered clearly that the agents snatched him in March 2012 and interrogated him for 38 hours.

“A group of security agents took turns asking me for information on who’s who in the Hong Kong literary circles and they handed me of a list of pen names and asked me to identify them,” the author of numerous biographies said. [Source]

Along with the crackdown on employees of publishing houses like Lee and Gui’s Mighty Current, which sell politically salacious books, Chinese authorities have also tightened the importation of such books across the border in recent months. After the recent detentions, Hong Kong bookstores have pulled many titles from their shelves, while book distributors have stopped shipping books into the mainland. Yet the government’s definition of a banned book is notoriously opaque, so readers often don’t know when or why their purchases will be confiscated by customs. Civil rights lawyer Yuan Yulai is suing the government for a recent confiscation of a shipment of books from Hong Kong, many of which are already for sale in China. Jun Mai at The South China Morning Post reports:

A government official in charge of publications, radio and culture and four policemen arrived at Yuan’s office in Ningbo in Zhejiang on Friday carrying his parcel of books. They said Yuan was suspected of “purchasing and storing illegal publications” and opened the parcel, despite Yuan’s protests. They then confiscated the volumes, according to Yuan.

The books, whose subjects ranged from North Korean defectors to Nazi Germany, did not include topics that usually result in a ban on the mainland, such as alleged details of government leaders’ person lives.

“My assistant found that six of the books were available at the national library. So there are illegal publications in the library, too?” asked Yuan.

[…] The purchases did not break any criminal law or pose a threat to state security so law enforcement agencies had no right to breach his right to privacy in his mail, Yuan said in his filing to the court, quoting the country’s constitution. [Source]

A day after Premier Li Keqiang pledged greater economic support for Hong Kong at the opening of annual parliamentary sessions in Beijing, Zhang said that while a recent riot in Hong Kong was a concern, it was one the city’s government could handle.

“He (Zhang) said one needed to take a broader perspective to look at it, and to not politicize everything,” said Rita Fan, a standing committee member of China’s parliament chaired by Zhang.

[…] Other delegates who met with Zhang said that while Zhang didn’t single out anyone for blame, there remained concern among Beijing’s top leaders towards an embittered cluster of youth groups in Hong Kong using increasingly radical or violent means to demand greater autonomy. [Source]

Meanwhile, Basic Law Committee member Rao Geping recently stated that China has the “right and responsibility” to interfere if Hong Kong protests turn violent, as they did over Lunar New Year in Mongkok.