Three Hong Kong Booksellers To Be Released on Bail 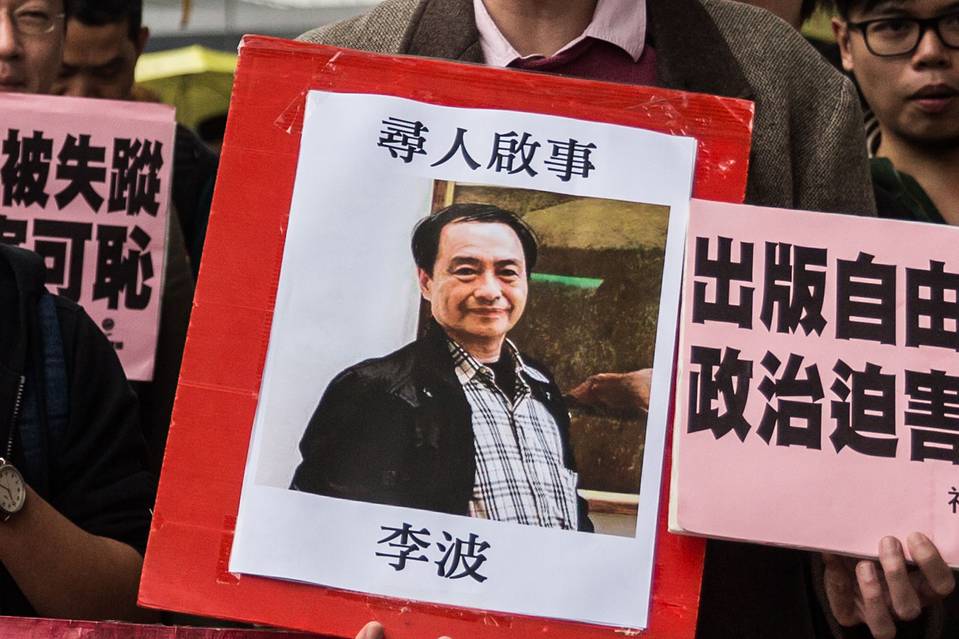 Three of the five Hong Kong booksellers and publishers who are under police detention in China after disappearing in Hong Kong or Thailand will be released on bail while the investigation is completed. From AP:

Lui Por, Cheung Chi-ping and Lam Wing-kee will be “released on bail pending investigation in the coming few days”, said Hong Kong police in a brief notice late on Wednesday, based on information from the public security department in neighbouring Guangdong province.

[…] The police statement did not say whether they would be allowed to return to Hong Kong or would have to remain in mainland China.

Lui, Cheung and Lam vanished in October and then reappeared on Sunday on Hong Kong-based pro-Beijing news channel Phoenix TV, where they confessed to helping Gui post thousands of books illegally to mainland Chinese buyers.

Hong Kong police had said previously the three were being investigated in a case involving a “person surnamed Gui”, based on information from Guangdong public security officials. [Source]

Police said that they received a letter from the Interpol Guangdong Liaison Office of Guangdong Provincial Public Security Department on Wednesday afternoon, stating that the three booksellers were suspected to be involved in a case relating to “a person surnamed Gui” and that “compulsory measures were imposed on them earlier”. It is unclear whether those released on bail will now return home.

The police said that the families of the three booksellers have been notified, and that they will continue to follow up on the missing persons cases. They also said that they have written to mainland authorities to ask for more details.

The fifth publisher, Lee Bo, was not mentioned. Lee recently gave interviews with Chinese media, in which he said that he was not kidnapped and that he was giving up his British citizenship. [Source]

Gui Minhai, a Swedish citizen, is the co-owner of Mighty Current publishing house, which is known for its salacious titles on China’s political leaders. Earlier this week, all five men were interviewed on Phoenix Television. Lui, Cheung, and Lam all said they had helped Gui illegally import books into China. In a separate interview, Lee Bo denied reports that he had been forcibly taken to the mainland, and said that he had “smuggled” himself into the country from Hong Kong in order to assist with the police investigation. Family members and supporters of the men have expressed doubts that they traveled to China on their own.

In an editorial, The Wall Street Journal argues that the detentions and apparent forced confessions of the publishers will set back Beijing’s faltering efforts to win over a younger generation in Hong Kong which has agitated for more social, economic, and political independence from the mainland:

“I have deeply reflected on what I have done and very much regret the illegal book trading I have carried out,” said Liu Por, who vanished in October while visiting the mainland. “I deeply acknowledge my mistakes and am willing to be penalized,” said another. State media suggest the subordinates may soon be released for being “relatively cooperative.”

Some in Hong Kong interpret these charades as a sign that Beijing knows it has overstepped and is fumbling for a way out. The more likely explanation is that the plan was always to frighten Hong Kong’s most vocal critics of Beijing into silence. Even clumsy confessions serve that purpose. [Source]

Publishers and booksellers in Hong Kong who sell politically sensitive books are reportedly pulling certain titles in response to the detentions. Delivery services that used to specialize in shipping “banned” books into China are now hesitant to do so, according to a report by Phila Siu, Oliver Chou and Christy Leung of The South China Morning Post:

With their refusal to handle bulk delivery, mainlanders looking for the banned books may have to come to Hong Kong in person and buy them.

“In the past, staff from Causeway Bay Books would wrap the banned books in the covers of love novels. Delivery companies usually charged just HK$10 for each kilo of books delivered. That’s not a lot of money,” a source with knowledge of the delivery process said.

“No companies that I know of would still do deliveries now. They are running a business and the possible price to pay is just too high.” [Source]

Yet the fine line of what constitutes a “banned book” remains unclear, according to a report by Beimeng Fu in Buzzfeed:

Basically, everybody is confused over how to determine what kinds of books are “banned” books, including outspoken and influential Hong Kong writer and TV culture critic Leung Man-tao. “Does China have any regulation or law defining ‘banned’ book? The answer is no,” he wrote in a recent column. If publications with official authorization are legal books, then those without the government’s sign-off qualify as “illegal” publications, he explained. [Source]