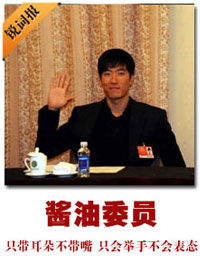 Member of the National People’s Congress, China’s “rubber stamp” legislature, or the advisory Chinese People’s Political Consultative Conference, which both meet at the annual Two Sessions in Beijing. Some Chinese citizens have complained that the structure and bloated size of the NPC render most of its members powerless. Its full session has never rejected a bill, and some delegates skip meetings with the excuse that they’re at the Two Sessions “mainly to meet people and learn” (以交流和学习为主).

Passive observation is known as getting soy sauce, after a man-on-the-street interviewee’s response to Guangzhou TV about a celebrity scandal in 2008: “What the fuck does it have to do with me? I was just out buying soy sauce.” During the 2011 Two Sessions, netizens dubbed NPC delegates who said yes to every proposal “soy sauce representatives” (jiàngyóu dàibiǎo 酱油代表). A mock news show on that year’s Two Sessions described legislators who are either absent, passive, or who “review the proposals but never inquire about popular opinion and just sit around on the toilet waiting for inspiration to come to them.”

Can’t get enough of subversive Chinese netspeak? Check out our ebook, “Decoding the Chinese Internet: A Glossary of Political Slang.” Includes dozens of new terms and classic catchphrases, presented in a new, image-rich format. Available for pay-what-you-want (including nothing). All proceeds support CDT.

Tags :two sessions,word of the week