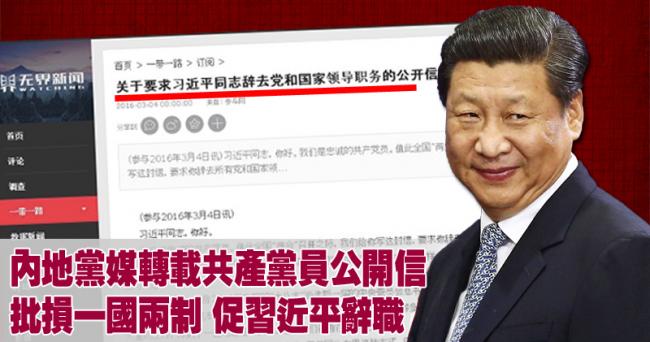 An open letter from “loyal Party members” asking President Xi Jinping to step down lived shortly on Wujie News (watching.cn), a media site funded in part by the Xinjiang propaganda department. China Change has tracked its brief history, also reporting that journalist Jia Jia appears to have been detained on suspicion of connection to the letter:

Jia Jia told to friends privately that, on March 4 when he learned from a WeChat friend circle about the letter’s appearance on watching.cn, he contacted the Executive Director Ouyang Hongliang (欧阳洪亮), who was a former colleague of his, about it. When the censorship authorities investigated the incident, Ouyang, in response to questioning, said he’d first heard about it from Jia Jia. Soon thereafter, family members of Jia Jia in Shaanxi Province were also questioned by authorities.

The open letter was first published in the overseas Chinese website Canyu.org at 8:47pm Beijing Time on March 3, Canyu editor Mr. Cai Chu told China Change. He said that he received the letter in his private email that day. The same letter was also posted on Mingjing (明镜) website at 8:56 March 4 (we assume that was Beijing Time as well). [Source]

Weibo is blocking search term combinations related to the letter and calls for Xi’s resignation, including:

Dissenting opinions from named sources are also being filtered from Weibo searches. A Xinhua employee identified as Zhou Fang criticized “the crude rule of the Internet control authorities” in his own open letter, in which he also condemned the purge of outspoken microblogger Ren Zhiqiang from social media. Zhou Fang + Internet controlling body (周方＋网络主管部门) and Ren Zhiqiang + challenge Xi (任志强＋质疑习) are now blocked search combinations as well.