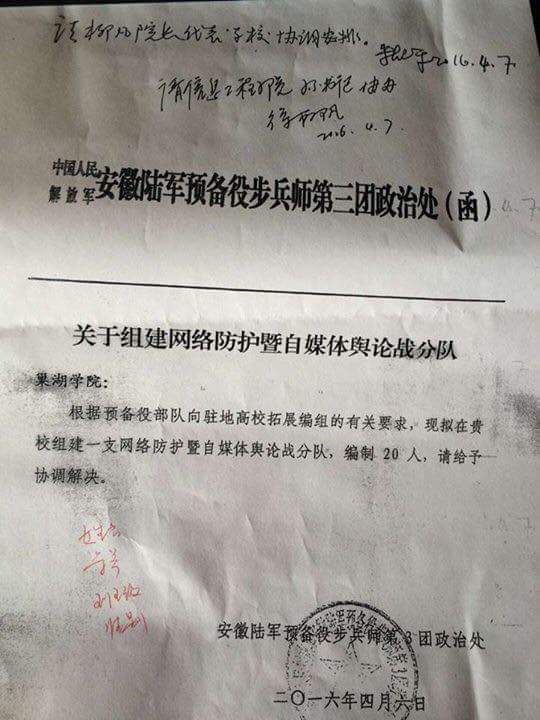 Twitter user Lhasawa Tenzin Neema (@lhasa_bhu1985) has posted what appear to be instructions for PLA reservists at a university in Hefei, Anhui Province to create an internet “warfare unit”:

CDT has previously reported on internet control schemes organized by institutional chapters of the Communist Youth League across China. The potential involvement of PLA reservists in monitoring internet use at a university appears to be a new measure, however.

All Chinese university students must undergo weeks of military training, usually completed before they begin their first year of studies. The PLA document on Twitter does not clarify whether the reservists are students. A scholarship program to train “national defense scholars” (guófáng shēng 国防生) in higher education has been in place since 1999.

In March 2014, the CYL set a quota of 15,000 “student internet propaganda workers” for Anhui Province. A February 2015 CYL document on a nationwide “Youth Internet Civilization Campaign” set a target for 420,000 volunteers in Anhui, with 150,000 of those to be on the “university battlefront.”

Ordinary Chinese citizens are increasingly aware of the Great Firewall and domestic internet censorship, and some are balking at the threat of further restrictions.