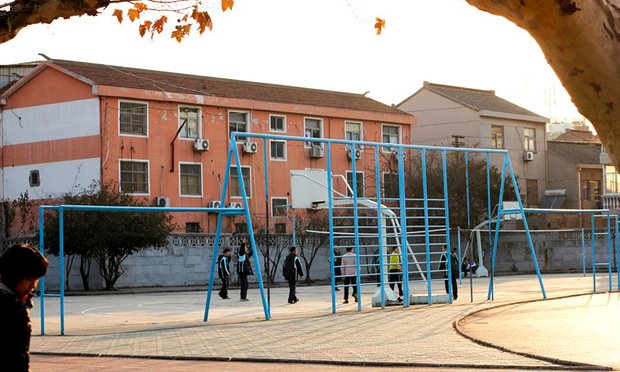 China’s state broadcaster CCTV reported on Sunday that nearly 500 students at Changzhou Foreign Language School had been diagnosed with various illnesses after being exposed to toxic chemicals from a former industrial site where the school had recently relocated. The BBC reports that local government officials have begun to dispute the allegations brought on by CCTV:

Both the CCTV report and the local authorities in Jiangsu province say children started getting ill shortly after the move.

However, they disagree on how severely ill the students are.

The CCTV report said out of a total of 2,451 students, 641 had medical examinations and 493 were diagnosed with illnesses including bronchitis, dermatitis, lymphoma and leukaemia.

Local authorities, meanwhile, say ailments were reported after the move but they list them as skin allergy, cough, nose bleeding, vomiting, oral ulcers and lumps in the thyroid glands.

[…] They said: “We invited experts to analyse the test results. Experts say thyroid nodule could happen to any 13-15 year old teenagers, and the possibility is 7%. The reasons are: insufficient iodine intake, too much pressure, instinct immune deficiency, drug intake; or virus affection, or immune system disease.”

No leukaemia case was found, Changzhou officials have said. Only one lymph cancer was found which was diagnosed in September 2015 before the school moved to the new site, they added. [Source]

While the incident continues to generate widespread public outrage, parents have been warned not to petition and “stir up trouble.”

At The Guardian, Tom Phillips reports that China’s environmental activists are demanding the government launch an independent investigation and implement tougher laws to prevent similar tragedies from repeating:

Speaking on Tuesday, Ma, the director of the Beijing-based Institute of Public and Environmental Affairs, called for a “comprehensive and independent” investigation into how a similar disaster had been allowed to happen in China.

[…] Ma Jun said that in the wake of the Love Canal disaster US lawmakers had introduced powerful legislation that made chemical companies “extremely cautious” about the disposal of hazardous materials. Similarly tough laws were needed in China as the country embarked upon the massive redevelopment of so-called contaminated brownfield sites.

Ma said that when Chinese companies illegally dumped toxic waste they tended to dump the most harmful substances because they were the most expensive to dispose of.

“It’s all about ultra-high profits – illegal profits. So we need to make sure that they understand that [if they illegally dump waste] it will cost them not just a fortune – but it will cost them the whole company if they do that,” he said.

“The lesson from Love Canal and the experience in the west is that we need to have really powerful legislation so that polluters will take no chances.” [Source]

As of today, Changzhou Foreign Languages School remains open and in full operation. The three chemical plants near the site of the school were reportedly shut down in 2011.

Recent reports say that authorities in eastern Jiangsu have ordered the shut down of all chemical plants in the region of Chengnan Experimental Primary School, a second school in the province where children are reporting illnesses.