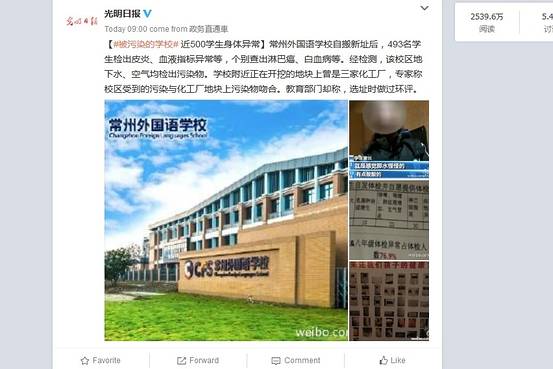 According to state television broadcaster CCTV, hundreds of students at Changzhou Foreign Languages School in Jiangsu province were diagnosed with a range of pollution-related illnesses, including cancer, that reportedly developed after the school relocated to a former chemical site last year. From Te-Ping Chen at The Wall Street Journal:

Nearly 500 students at a school campus constructed near the former site of several chemical plants in east China’s Jiangsu province have come down with health problems ranging from bronchitis to eczema to — in some cases — lymphoma and leukemia, state broadcaster CCTV reported on Sunday.

[…] According to CCTV, at the end of last year, shortly after the school’s new site was occupied, students started to display strange symptoms. Parents grew suspicious that the school’s water and air were polluted, the casualty of three chemical plants that previously had been located nearby.

[…] The soil was contaminated with a toxic cocktail of chemicals and heavy metals, CCTV said, including excessive levels of carbon tetrachloride, chloroform, and more. In particular, quantities of chlorobenzene – a chemical linked to brain, liver and kidney damage in high doses — were found in concentrations nearly 10,000 times greater than the national standard. [Source]

Parents of the pupils attending the Changzhou Foreign Language School had suspected for months the contaminated environment was to blame for the rashes, coughs and headaches their children began to develop at the end of last year.

[…] Parents had demanded the pupils be moved to a safer area, but the school management and local education authorities refused. Still, officials ended the autumn semester earlier than usual in ­January.

[…] “When talking to other parents, we found that almost all the pupils had similar symptoms, and we could all smell the stench. Then we began to suspect [the symptoms] were caused by pollution,” the father of one pupil was quoted as saying.

[…] Parents commissioned their own tests and found chemical pollutants including toluene, acetone, and carcinogenic benzene in the air, and excessive levels of manganese and fluoride in the groundwater the school was using, the report said. [Source]

The New York Times’ Javier C. Hernandez writes that the incident exposes the amount of work that remains to be done for China’s management of hazardous chemicals to measure up to international standards. Lax government oversight and official neglect were major factors that contributed to a series of deadly explosions at chemical plants in Tianjin, Shandong, and Zhejiang.

The publication of the report suggested that China’s leaders were taking a more aggressive stance toward chemical companies at a time when public anger over environmental pollution is mounting, especially in the aftermath of a high-profile chemical disaster last year that killed 165 people in the port city of Tianjin.

But the incident also underscored the serious gaps that exist in China’s oversight of hazardous materials. While China has made strides in publicizing air and groundwater pollution data in recent years, it still does not provide data on local soil pollution or require companies to publicly list which substances they discharge as waste, a departure from international standards.

Ma Jun, a prominent environmentalist, said the government’s efforts to investigate egregious cases of pollution was a promising step. But he said China still had much more to do to rein in the powerful chemical industry. [Source]

Elsewhere, SCMP’s Li Jing reports that, according to statistics released by China’s Water Resources Ministry, more than 80 percent of the country’s groundwater is contaminated and unfit for human consumption:

About 80 per cent of groundwater in the mainland’s major river basins is unsafe for human contact, a survey by the Ministry of Water Resources has found.

The ministry last year tested 2,103 wells in the basins of the Yangtze, Yellow River, Huai River and Hai River, finding that exploitation and pollution from industrial and agricultural emissions were the biggest threats to water standards.

[…] The environment ministry’s data was calculated from nearly 4,900 monitoring sites in 202 ­cities. [Source]

Widespread surface water contamination has forced an increasing number of cities to dig deep wells to meet consumption demands. Courtney Verrill at Business Insider gathered a series of photos showing the extent of water pollution in China. Meanwhile, Alyssa Abkowitz at The Wall Street Journal reports that a new generation of wearable anti-pollution devices are hitting the market in China as consumers look to new technology to reduce the impact of air pollution.