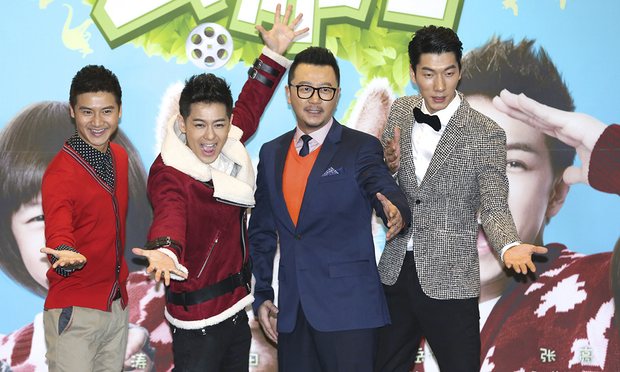 The aim of the ban, said the state-run news agency, Xinhua, which first reported the guidelines on Sunday, is to protect the children from the pitfalls of “overnight fame.”

The regulations are the latest in the government’s continuing efforts to rein in the fast-growing online television industry. Last month, new rules issued by two industry associations, including one state-sanctioned organization, outlined a comprehensive policy that included a ban on depictions of gay relationships, underage romance, extramarital affairs, smoking, witchcraft and reincarnation.

[…] Some experts said the latest guidelines appeared to be aimed specifically at hugely popular shows like Hunan Television’s “Where Are We Going, Dad?” and Zhejiang Television’s “Dad Is Back,” both of which feature children of celebrities.

“On these shows, if you are the child of a celebrity, then you become a celebrity by birth,” she continued.

“This could have a negative social impact,” she added. “You can’t have class differences starting from childhood.” […] [Source]

The posh lifestyles of celebrities have previously been targeted by central propaganda directives, and state media has warned against the “negative impact” that celebrity lifestyle can have on the masses. More from the AP on media regulators’ desire to limit programming that encourages fascination with lavish living:

It said reality show producers had been ordered to drop the “mistaken notion” that they should use well-known entertainers to attract viewers. “Do not permit shows to become venues for displaying fame and wealth,” the order quoted by Xinhua said.

[…] Chinese media regulators want to rein in programmes which they see as overly materialistic or encouraging the worship of celebrities who might compete with role models promoted by the ruling Communist party.

Jiang Yilei, her real name, lived a quiet life at the Central Academy of Drama in Beijing a year ago, but now finds herself the mainland’s second best known web celebrity after Wang Sicong, the flamboyant son of China’s richest man, Wang Jianlin – according to the mainland’s IT industry flagship magazine Internet Weekly.

The arrival of social media in the mainland more than a decade ago and the increasing accessibility of the internet has allowed many ordinary young men and women to gain celebrity to massive audiences with their eye-catching opinions and comments.

Many are followed by millions of fans who are keen to catch whatever they do or say. Web celebrities often appear in newspapers or on television as conventional media has developed a fascination for them as well.

But compared to their counterparts years ago, the current crop of big name cyber celebrities are leveraging their fame to cash in, with the earnings on par with first-tier stars.

[…] Jiang is in such a position. After maintaining a steady following for months, she received 12 million yuan (HK$14.4 million) from domestic private equity firms last month. [Source]

SAPPRFT has reportedly set sights on Papi Jiang for her use of profanity, ordering her videos off of streaming sites until they are edited to accord with regulations. Newly-launched English-language state media outlet Sixth Tone reports:

According to a short news article by party newspaper People’s Daily, the State Administration of Press, Publication, Radio, Film and Television (SAPPRFT), a government media supervision body, has told Papi Jiang to take her videos offline. The videos can be uploaded again when the coarse language has been removed and they adhere to regulations, the People’s Daily reported on its mobile app on Monday.

SAPPRFT decided to censor Papi Jiang “following reports from the public and evaluations by experts,” said the People’s Daily.

[…]  Since Monday evening Papi Jiang’s videos were no longer available on Youku, her public WeChat account, and other websites, but could still be viewed on Weibo. Papi Jiang’s agent did not respond immediately to questions from Sixth Tone.

[…] In reaction to the news, Yang Ming, a business partner of Papi Jiang, told Sixth Tone’s sister publication The Paper that they “will continue to make videos in accordance with socialist core values.” [Source]

At The Beijinger, Tracy Wang translates Papi Jiang’s acceptance of the criticism from state censors, and notes last minute opportunities to view the profanity-laden videos before they disappear entirely:

Jiang, who has 11.2 million followers on Weibo and whose videos have been viewed 300 million times, posted this statement on her Weibo account:

“I’m a person who is open to criticism. Only those willing to accept criticism are able to correct their mistakes and head in a better direction. As a person in the media spotlight, I will pay closer attention to my language and my image, and will resolutely make amends to my videos according to requests, as well as attempt to deliver more positive energy in the future. If you have other issues with my work, I invite your further feedback on how Papi can get better and better.”

We checked several platforms, and there are only three Papi videos on Youku and only one video on Iqiyi. Her Weibo account appears to still be hosting some of the banned them, but god only knows when they will be scrubbed as well, so bone up on your Chinese foul language skills while the opportunity still lasts. [Source]

A few of her older videos have been uploaded to her YouTube channel, where they remain.

At Tech in Asia last week, C. Custer reported that all Chinese live-streaming platforms have become the subjects of a Ministry of Culture investigation for allowing models a venue to be “vulgar”:

The Ministry of Culture says that it has already dispatched investigators, and will publicly announce punishments once it has concluded investigations.

Live streaming is a fast-growing industry on China’s web. The most popular streamers tend to be professional gamers – a top Dota 2 or League of Legends pro can attract hundreds of thousands of viewers to a stream to watch them practice the game – but there are all kinds of other streams, too. Also popular are “lifestyle” streams, which tend to feature attractive women who talk and interact with their followers while wearing revealing outfits.

Still, cleavage isn’t a crime, and the games that are popularly streamed are all legal to play in China, so it’s not clear exactly what the Ministry of Culture is planning to crack down on here.

[…] If the Ministry of Culture punishes live streaming platforms, it wouldn’t be at all surprising to see those platforms also adopt a set of similar measures [to major video provider that recently pledged to abide by a set of standards]. And punishment is essentially a guarantee; although technically the Ministry of Culture is still “investigating,” it would be a massive loss of face for the Ministry to allege wrongdoing on state TV and then ultimately find nothing. In all likelihood most of the investigation has already happened, and what remains now is figuring out how these sites should be punished. [Source]