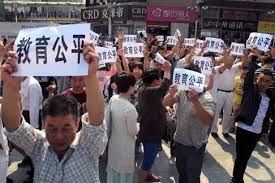 A number of recent protests and incidents have brought public attention to rising discontent among China’s middle class, a group that has often been viewed as benefiting from China’s economic growth and less likely to rock the boat. Of note, the death of Lei Yang, a young father and graduate of the prestigious Renmin University, while in police custody generated outrage online, leading propaganda officials to issue restrictions on coverage of the case. Parents concerned over their children’s access to higher education recently have staged protests against reforms to college admissions standards. Recent attacks on doctors by disgruntled patients have brought to light systemic problems with the healthcare system. Te-Ping Chen reports for The Wall Street Journal on these and similar incidents and their impact on China’s urban middle class:

Such disruptions have come as reminders that rising incomes or better education don’t automatically shield China’s expanding middle-class ranks from danger, whether physical or economic, in a society where the law can be arbitrarily enforced and justice is sometimes brutal.

“There’s a gap between expectation and reality,” said He Yunfeng, who heads Shanghai Normal University’s Institute of Knowledge and Value Sciences. “These kinds of incidents concentrated together have created a kind of panic.” Some critics have begun joking that the Chinese term for middle class— zhongchanjieji—would be better depicted by the term zhongcanjieji, or the “tragic middle class.”

[…] Though incomes have continued to rise, setbacks to the Chinese economy—growth recently hit a 25-year low—are deepening discontent just as many urban dwellers are already voicing concerns about education, health care and pollution. [Source]

While each of the incidents individually cover very different issues, together they show a growing concern over the condition of China’s public services and the government’s ability to effectively manage them amid a slowdown in the economy. From the Economist’s Intelligence Unit:

A combination of incidents in the past two months has raised questions about Mr Xi’s ability to deliver on his promise of social prosperity. These episodes have covered the gambit of public services, and suggest that there remain many obstacles in their efficient provision. [Source]