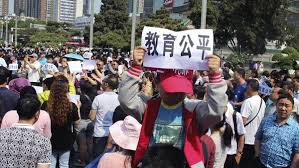 Parents angered over proposed changes to the admissions standards for universities, which they fear will favor students from outside their geographic region, have taken to the streets in protest in three provinces. Earlier this month, thousands of protesters gathered in cities in Hubei and Jiangsu provinces, Te-Ping Chen of The Wall Street Journal reports:

The admissions process is fraught with regional inequities. China’s best schools are located in wealthy cities such as Beijing and Shanghai, and those universities allocate larger quotas to local students.

In recent days, fears about shrinking quotas for local students had bubbled up in Jiangsu, one of China’s wealthier provinces, after authorities announced a change in the system. As part of a national scheme to try to boost more equity, provincial authorities said 38,000 slots in Jiangsu universities would be reserved for students from other provinces, including poorer regions such as Guizhou and Guangxi.

The move prompted a firestorm of concern that local students would be hurt in the process. “Jiangsu parents are well-educated, a lot of them are business people who are rich,” said Zhang Weiqi, founder of NextGen Parents, an education-focused social network for parents. “They have high expectations for their kids.” [Source]

He Huifeng at the South China Morning Post writes about the parents’ concerns and the existing inequalities with university admissions:

The parents were quoted by news website ThePaper.cn as saying that less than 10 per cent of local students in Jiangsu would be enrolled in local key universities while a student from Beijing had about a one in four chance.

They said they felt angry and confused why universities located in the national capital were allowed to reserve more spots for those students with a Beijing hukou, while students in Hubei and in Jiangsu had to make more room for non-local students.

The parents’ concerns were reasonable, according to Huang Wenzheng, a demographer and visiting scholar at Peking University’s Guanghua School of Management. The mainland’s college admissions system has long suffered from distortions caused by the residency control system.

Students who want to attent a university away from where they live must often score significantly higher than locals on the general entrance exam, as most schools give preference to residents. [Source]

Soon after the protests erupted, the government issued a response indicating that the reforms were intended to make education access more equitable for students from poorer regions of the country, who traditionally are at a disadvantage when applying to schools in wealthier regions. Shi Jiangtao at the South China Morning Post reports:

Hours after thousands of ­parents took to the streets in Nanjing and Wuhan, the Ministry of Education said late on Saturday night that admissions resulting from college entrance exams in all provinces would steadily increase this year.

The statement was aimed at easing parents’ fears that a move to allocate enrolment quotas for non-local students would make it more difficult for their children to find places close to home.

Both the ministry and authorities in Jiangsu and Hubei insisted the quotas were aimed at making tertiary education more equitable and would benefit students from less developed inland provinces.

Zhang Wei, a resident of Wuxi in Jiangsu, said despite the ministry’s reassurances, he remained worried that his son, who takes the college entrance exam next month, might be affected. [Source]

On Monday, the protests spread to a third province, Henan, where parents expressed similar concerns:

“While Beijing students got into universities, many Henan students who earned the same scores in their entrance exams could not even get into a college, and became migrant workers,” the letter says.

Xiong Bingqi, deputy director of the 21st Century Education Research Institute, said the protests indicated simply adjusting the quotas would not be enough to solve the problem. [Source]

The gaokao college entrance exam, which for many students is their one and only opportunity to be admitted to university, has come under fire in recent years for the intense psychological pressure it puts on students and for the inequality—and corruption—it fosters in the higher education system. Chinese education expert Jiang Xueqin has described the gaokao as, “essentially a lot of people trying to push each other away so that they can squeeze into the door of elite college admissions.”

Reforms announced in 2014 aimed to make the exam itself more equitable for students from diverse geographical regions and socio-economic backgrounds. However, many critics believe that only abandoning the gaokao system can instill systemic change. Popular columnist Tang Yinghong has published an essay (in Chinese) titled, “Why Do People Think the Gaokao is a Fair Examination?” in which he states that his view that “the college entrance examination system was, from the beginning, built on a foundation of injustice.”

Read more about the gaokao system, via CDT.