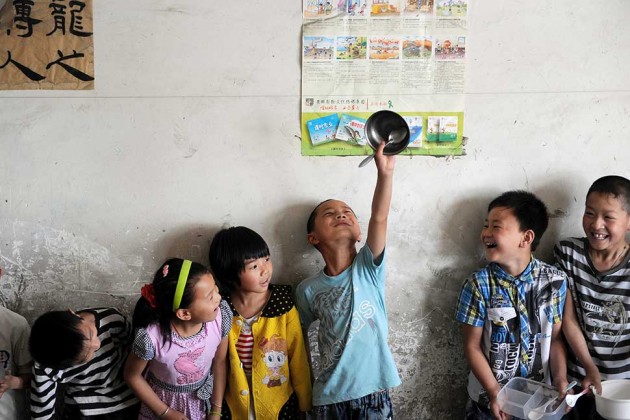 As a new school year begins, China’s education gap remains sizable despite recent reform packages aimed at making access more equitable. As promised following last year’s Third Plenum, changes to China’s controversial hukou household registration system were announced in late July. The system, in effect since 1958, has long limited the many migrant workers who have helped fuel China’s rapid economic growth from public services in the cities in which they toil. Following the government’s July announcement, some characterized hukou reform as merely one small step towards allowing equitable access to services (for more analysis of the distance that remains between the recent announcement and “real hukou reform,” see a recent China Policy Institute paper by Charlotte Goodburn). Bloomberg Businessweek outlines the history of the hukou, and further explains the new system’s faults:

The hukou system was enacted in 1958 as away to limit movement between the countryside and cities. At that time, the Chinese Communist Party was explicitly anti-urban and antibusiness. After economic reform began in 1978, the hukou became increasingly anachronistic as millions of migrant workers left farms and villages for new jobs in factories and private companies in the cities. Yet they were penalized because, without local household registration papers, these migrants were denied access to public health care, education, and other social services.

The new system, however, will be only a partial fix. Discrepancies between rural and urban tax collection will gradually be phased out, but access to services will still be linked to location. While smaller cities may be willing to accept newly registered residents, the governments of China’s leading metropolises—including Beijing and Shanghai—are overburdened and still actively trying to discourage new residents (other than wealthy arrivals) from putting down roots. […] [Source]

In Beijing, quality education remains out of reach for migrant families. A report from Caixin notes that many schools catering to the children of migrants have been shut down on government order this year, much as they have been in the past. From Caixin:

Many budget kindergartens in rural Beijing mostly catering to the children of migrant workers were ordered to close ahead of the new school year, with some citing safety concerns, but once again local governments did not tell parents how else to educate their offspring.

Teachers and administrators at the schools said they started receiving notices from local governments in May requiring them to close. Some have followed the order, but others were defying it.

[…] The government’s reasons were sound, critics said, but the move still amounts to discrimination against migrant workers. The government has essentially put the children out of school or forced them to separate from their parents by returning to their hometowns, they say. Schools backed by the government are much more expensive and many do not accept students without a Beijing hukou.

[…] It is unclear how the government intends to deal with the students who attended the kindergartens that were closed. Migrant children can attend a Beijing public school only if their parents can present five documents proving their employment and temporary residency in the capital. In practice, few migrant workers can gather all the paperwork. [Source]

Also see CDT’s translation of “My Child, I’m Sorry,” a poem that made rounds on social media earlier this year, said to be written by a migrant mother in Beijing.

Last week, authorities announced that Shanghai and Zhejiang province would be pilot sites for the 2017 rollout of reforms to the similarly controversial gaokao college entrance exam. The ultra-competitive exam has long been criticized for administrative corruption, the intense psychological pressure that comes with preparing for the test, and regional discrimination; People’s Daily described the upcoming reforms as aimed to “embody fairness.” In a commentary published by CNN, former principal of Peking University High School and frequent critic of China’s education system Jiang Xueqin argues that nothing short of canceling the gaokao will help in balancing access to higher education:

Chinese media have hailed these reforms as a panacea to China’s education woes: The poor will have a better shot at a top school, and students won’t feel so stressed out all the time.

However, as someone who’s either observed or worked in Chinese education since 1999, I believe that unless the government decides to cancel the gaokao, no systemic reform will matter.

[…] The gaokao system is essentially a lot of people trying to push each other away so that they can squeeze into the door of elite college admissions.

[…] This system is what economists like to call a zero-sum game, and explains why children are so sleep-deprived and stressed-out, and why parents must flatter and bribe teachers.