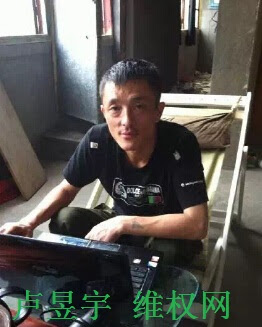 Friends and associates of citizen journalist Lu Yuyu, known as @wickedonnaa on Twitter, feared he had been taken away by police on June 14, when his frequently updated social media accounts went silent. Chinese Human Rights Defenders has now confirmed that he has been detained, along with his girlfriend Li Tingyu, on suspicion of “picking quarrels and provoking trouble”

The charge “picking quarrels and provoking trouble” has been increasingly used in recent years against a wide variety of activists, lawyers, and writers. While the direct cause of Lu’s detention is not yet known, Lu is known for his work posting information about protests and other mass incidents around China. Friends have noted that he may have tried to report from Wukan, Guangdong, where protests broke out last week over the dismissal of the elected village chief. Oiwan Lam reports for Global Voices:

On Weibo, Lu’s friend @ZGHQW99 is also looking for him:

“Lu Yuyu has been researching mass incidents across the country since 2011 and distributing the news on Sina Weibo and Twitter. He has been doing this non-stop for years so that netizens from China and overseas can see people’s suffering in China. Even [Party-affiliated] Hongqi’s ‘Worker and Peasant’ column has republished his writings. Last week, Lu went missing and out of contact. Even his relative’s mobile phone is unanswered. Please pay attention to this.” [Source]

Lu archives several dozen to more than two hundred incidents a day. He preserves pictures, descriptions of the events, comments from participants, and links to the source posts. Lu is able to avoid having his Internet cut-off by local police by using wireless Internet cards. As a result, his IP address changes constantly. [Source]