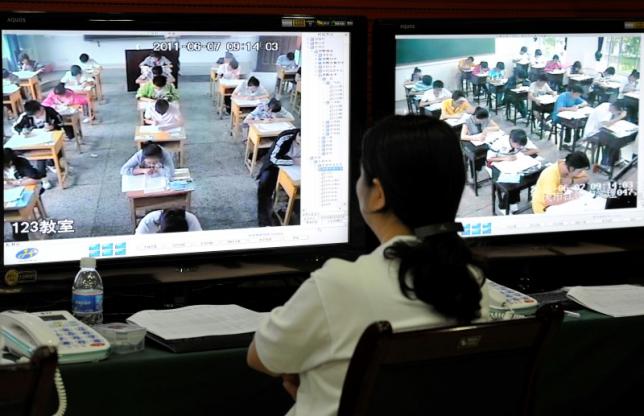 More than nine million high school students sat China’s grueling national college entrance exam, known as gaokao, this week. The exam, which determines a student’s academic future and subsequent job prospects, has been repeatedly criticized in recent years for its inequity and the associated corruption that exists in the college admissions process. In May, angry parents in several Chinese cities staged demonstrations over concerns that authorities are shrinking provincial admissions quotas traditionally reserved for local students.

For this year’s exam, Hong Kong Free Press’ Gene Lin reports that schools and invigilators across the country adopted exceptionally strong measures to guard against cheating, citing the use of technology to crack down on substitute exam sitters and wireless devices. These measures are a response to reccurring cheating scandals in recent years.

Provinces such as Hubei and Guangdong have strengthened security measures to prevent cheating, requiring students to go through a fingerprint and facial recognition system.

Meanwhile, in Anhui and Henan province, students are required to go through metal detectors to see if they are carrying devices that may assist cheating.

Students have increasingly turned to miniaturised gadgets to communicate during tests, according to Apple Daily. As countermeasure, universities in Jiangxi province and Chongqing city have mobilised devices that disrupt telecommunication during the exams. [Source]

In addition to these tactics, a new law has been introduced making cheating a criminal offense punishable by up to seven years in prison. Police forces were summoned in several cities to apprehend cheaters. Reuters’ Megha Rajagopalan reports:

Exam test papers were delivered by a police SWAT team in Beijing for the first time this year and at least eight police officers guarded each test center, state media reported.

[…] Police in the central province of Henan nabbed 9 people for selling fake exams, according to a local media report this week. Dozens of others had been caught elsewhere in the country, state media said. […] [Source]

The New York Times’ Javier C. Hernandez looks at the mixed public reaction to the law:

Many students and parents praised the effort to impose severe punishments on cheaters, saying it would serve as a powerful deterrent. But several were less certain of the law’s merits, saying it was too harsh.

Wang Yiran, 19, a freshman at Yangtze University in central China, said the law might discourage students from reporting incidents of cheating because they feared sending another student to jail.

“It’s simply too strict,” Ms. Wang said. “Because the punishment is so severe, no one will want to say anything.”

Bella Hou, 19, a freshman at the Beijing Institute of Technology, said she thought imposing a severe penalty was the only way to stop students from cheating.

[…] On Weibo, China’s version of Twitter, the reaction was mixed. One user wrote that a seven-year sentence was too harsh, saying, “That’s almost the same as the punishment for a hit and run.” [Source]