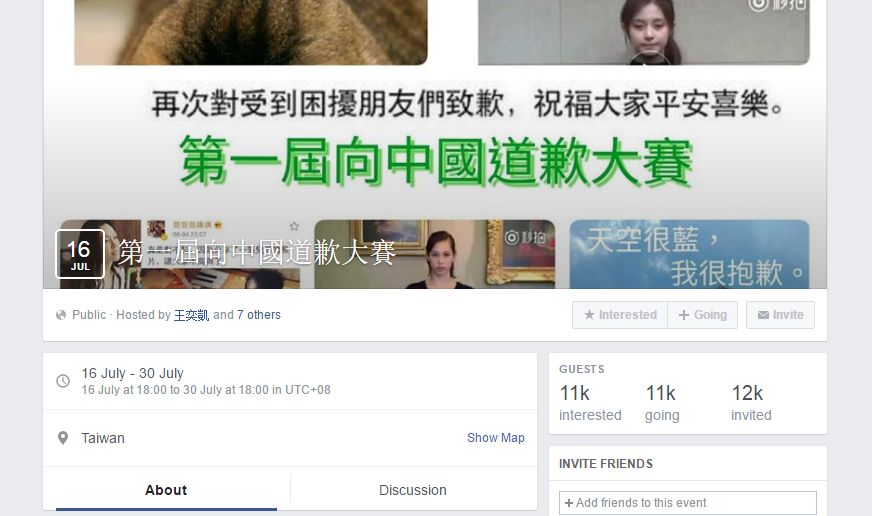 Japanese-American actress Kiko Mizuhara recently took to social media to issue an apology to the Chinese people after she faced criticism for photos that allegedly showed her in front of both Japan’s Yasukuni Shrine, which honors World War II dead, and the Rising Sun flag. Mizuhara denied that the photos were of her. She also was attacked for liking an Instagram post from 2013 showing someone pointing their middle finger at the Tiananmen gate. Naomi Schanen of the Japan Times reports:

In one photo, a woman said to be Mizuhara is seen visiting Tokyo’s Yasukuni Shrine, which honors Japan’s war dead, including convicted Class-A war criminals. In the other, she is allegedly posing in front of Japan’s Rising Sun flag, a symbol of the country’s militarist past.

Mizuhara has denied being in either photo, but nevertheless issued the apology.

In the video, she said she also wanted to “sincerely apologize” over “liking” a friend’s Instagram post from 2013. The post appeared to be a photograph by Chinese artist Ai Weiwei of someone raising their middle finger at Beijing’s Tiananmen Square.

In the five-minute video, which received over 90,000 shares and 140,000 comments, a dour and sincere-looking Mizuhara also apologizes in Mandarin, saying that “love and peace will bring us together and make the world a better place.” [Source]

The photos surfaced after internet users claimed that Mizuhara was starring in a romantic comedy movie “No Other Love,” but director Zhao Wei has denied her involvement. The film had already courted controversy when Zhao replaced actor Leon Dai in the lead role following online backlash over his reported support of the Sunflower Movement protests in Taiwan. From Lilian Lin of The Wall Street Journal:

The ax falls weeks after Mr. Dai was accused by local online reports of supporting Taiwanese independence as well as Falun Gong, a spiritual movement that is banned by Beijing.

The reports feature photos and media coverage of Mr. Dai participating in political and social movements that are regarded as offensive by Beijing, including the “sunflower movement” in Taiwan in 2014, which protested a trade pact with the mainland, and screenshots of Mr. Dai in an interview supporting gala shows launched by Falun Gong practitioners.

Many online called for the film, which finished shooting late June, to be boycotted. The film is backed by a slate of local studios including Alibaba Pictures, the film arm of the internet giant Alibaba Group. Alibaba declined to comment. [Source]

As Zhuang Pinghui reports for the South China Morning Post, the Communist Youth League led the campaign against Leon Dai:

The league took the online criticism of the film to a new level on Wednesday by publishing a lengthy article on the official Weibo page of the league’s Central Committee, which featured a compilation of online pictures and screen shots that it said proved how offensive Dai’s political stance was.

On Facebook, the person identified as a founder of the #FirstAnnualApologiseToChinaContest described himself as a farmer and philosophy student in Taiwan named Wang Yikai, according to the mainland transliteration for the characters in his name. Mr. Wang did not respond to a request for comment, and the preferred rendering of his name could not be confirmed.

“If you have any thing want to apologize to China, Welcome to attend the first annual ‘Apologise to China’ contest,” the page reads in English. The contest began Saturday and expires July 30 and the winner will be crowned ‘The first king of apologize to China!’” the page said.

[…] The reasons for contrition so far have included living under a blue sky (China’s skies are chronically polluted); eating clean food (food safety is a major challenge in China); and locking the door when using the toilet (not always done on the mainland).

“I’m sorry, I don’t write simplified characters,” wrote Ziyou, referring to the writing style of mainland China, but not Hong Kong or Taiwan, in apologizing for being different from Beijing. The commenter’s name is itself a clever pun. It means “character travel,” but is a homophone for “freedom.” [Source]

The Facebook contest runs with the tagline “apologising again to those friends who feel disturbed, wishing everybody peace and happiness.”

“I’m sorry…I didn’t eat everything on the periodic table once. I’m a terrible person,” said one post.

Another apologised for having three children, while one said “I was looking throughout Hong Kong for new barlun shoes, but I could only find fakes, I’m very sorry.” His post was accompanied by a picture of a pair of New Balance shoes, the shoe brand which was recently ruled to be infringing upon the Chinese brand New Barlun in a Chinese court. [Source]

As BBC reports, nationalistic Chinese readers are responding to the contest with apology videos of their own:

The apology idea has struck a nerve with Chinese-language readers, with the Facebook campaign page attracting over 12,000 likes and thousands of comments. One Taiwanese user taunts mainland Chinese readers, saying: “The Taiwanese people are holding their first contest to apologise to the Chinese people, but you’ll have to bypass the internet censors before you can see it. We are so sorry!”; while another says “In Taiwan we can freely and openly criticise our President Tsai Ing-wen, and the leader from our neighbouring country Xi Jinping. So sorry, China!”

Web users in mainland China have taken to the Weibo messaging service to snipe back: “I’m sorry that you’re seeing all those actors and actresses apologising to China so that they can keep making Chinese yuan!” says one. Another sends his apologies for not falling for phone scams originating in Taiwan: “I have received many messages from my Taiwanese compatriots wanting to give me free iPhones and gifts, but I have never replied. I apologise for not accepting your goodwill!” [Source]

Celebrities whose words or actions offend the Chinese government have been blacklisted from the mainland market in the past, including several Hong Kong actors who expressed support for the 2014 Occupy Central protest movement, and more recently, Lady Gaga. In June, French cosmetics giant Lancôme cancelled an event with Hong Kong singer Denise Ho following an online campaign against the company after Global Times erroneously referred to Ho as “pro-Taiwan and Hong Kong independence.” Some celebrities have issued public apologies as a way to make amends with the China market. Sixteen-year-old Taiwanese singer Chou Tzu-yu of K-pop group Twice filmed a public apology in January after she was filmed holding a Taiwanese flag on Korean television. Foreigners who offend Communist Party authorities are regularly accused of “hurting the feelings of the Chinese people.”