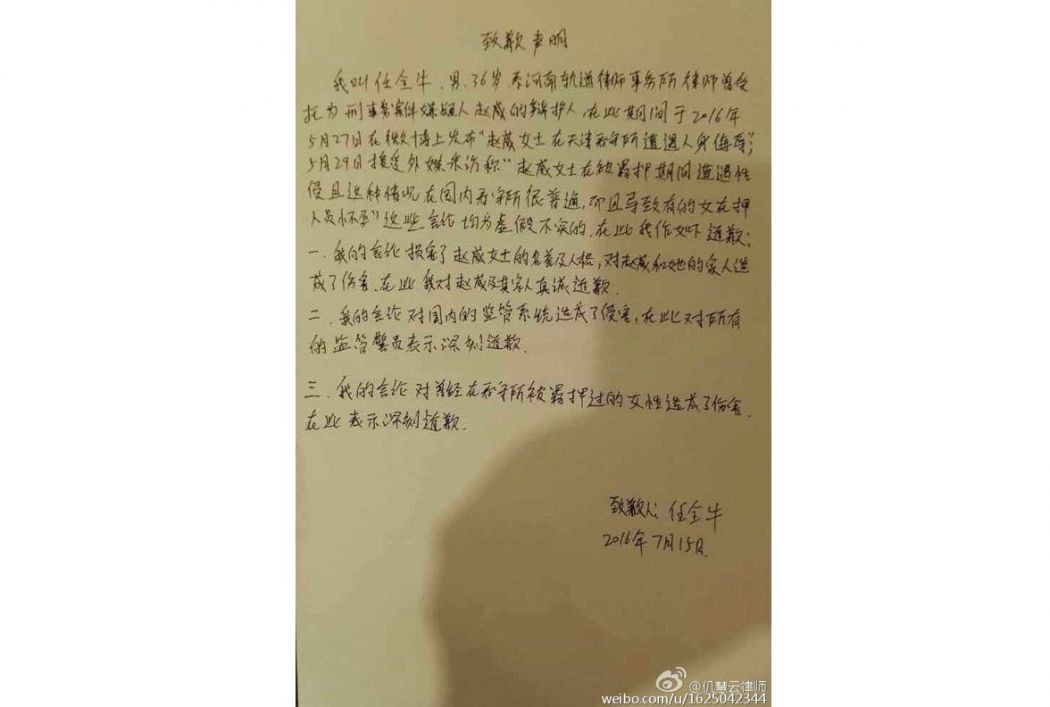 Legal assistant Zhao Wei, who was detained in July 2015 and charged with “subversion of state power,” has reportedly been released on bail but her current whereabouts are unknown. Zhao had worked as a paralegal for Li Heping, a prominent rights lawyer who was detained along with dozens of other lawyers in the “Black Friday” crackdown a year ago. After her reported release, Zhao’s social media accounts were updated with messages expressing regret for her involvement with rights activism, and accusing her lawyer Ren Quanniu of spreading rumors for saying that Zhao had been sexually abused in prison. However, her husband and others doubted that the messages had been written by her. Meanwhile, Ren, who has also since been detained for “making up and spreading false information,” has written an alleged apology. Catherine Lai of Hong Kong Free Press reports on the letter:

The letter was posted on Weibo by Zhang Huiyun, one of the lawyers appointed by authorities to represent Zhao. The letter claimed it was written by Ren and included apologies for posting that Zhao suffered “personal insult” in a Tianjin detention centre. It said that statements he made to foreign media – that Zhao Wei was sexually assaulted in detention – were false.

[…] Kit Chan, the executive director of the China Human Rights Lawyers Concern Group NGO, said that Ren’s apology letter must be seen in the context of his situation.

He is still in detention and his family were evicted from their apartment by their landlord and harassed by Zhengzhou police, she told HKFP. One of Ren’s lawyers was pressured by police to withdraw from his case. [Source]

Before his detention, Ren had told journalists that neither he nor Zhao’s husband You Minglei had been able to contact Zhao since her alleged release, and that he believed she was still under police detention. Meanwhile, friends and supporters of Zhao believe that her social media posts may indicate a harsh sentence for her former boss, Li Heping, who, like Zhao, has been charged with “subversion of state power.” Of the hundreds of lawyers and activists who were detained over the summer 2015, at least 20 remain in detention, and 11 of those face charges of subversion.