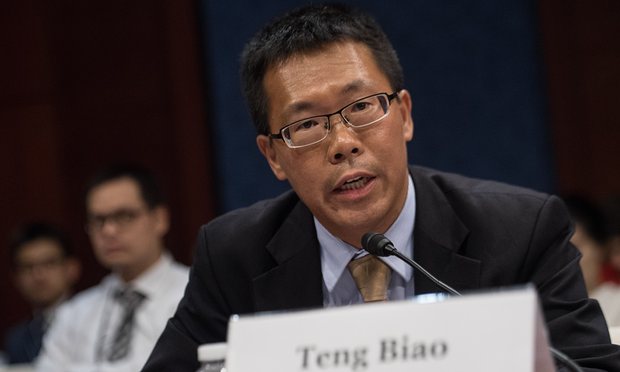 The leaders of the world’s twenty major economies will gather in Hangzhou this weekend for the annual G20 summit to discuss issues ranging from the global economy to the conflict in the South China Sea. Ahead of the summit, a group of Chinese activists invited to the White House have urged Barack Obama to press Beijing on human rights abuses while in China. Tom Phillips at The Guardian reports:

During a meeting at the White House on Tuesday afternoon, prominent Chinese activists told Susan Rice, Obama’s national security adviser, that China’s president had presided over a dramatic offensive against opponents of the Communist party since taking power in late 2012.

Teng Biao, an exiled human rights lawyer who was among those invited to address Rice, told the Guardian he had called on the US president to publicly speak out on what is likely to be his final presidential visit to Asia.

[…] Speaking after the meeting, which lasted about 80 minutes, Teng said he had told Rice he hoped Obama would publicly call for the release of a series of “political prisoners” and activists. They included the jailed Uighur scholar Ilham Tohti and Nobel laureate Liu Xiaobo as well as Li Heping and Wang Quanzhang, two civil rights lawyers caught up in a Communist party crackdown on their trade.

Teng also urged Obama to highlight the plight of dissidents being held in prisons in Hangzhou, the G20’s host city, and to draw attention to local political activists who have been placed under house arrest to prevent them speaking out ahead of the summit. [Source]

Chinese authorities’ hostility toward human rights has permeated its preparations for the G20. China did not agree to host a C20 until late April, and even then did not clarify when or where the gathering would take place. In mid-June, Chinese authorities disseminated to a limited audience information regarding registration, yet that process only remained open for 10 days—and for a gathering that was only confirmed for July 4-5 in Qingdao. Some representatives from international organizations that have participated in past C20s applied but were not extended invitations; some representatives from a given group were invited to participate while others were turned down. Chinese state media subsequently claimed that more than 200 representatives of civil society groups from more than 50 countries participated, yet there is no publicly available list of those groups. It is also unclear whether independent Chinese groups were able to participate. We urge that you regard the C20 communique with skepticism, as it is difficult to see it as a true reflection of the views of independent domestic Chinese and global civil society.

[….] As a result, this year’s Summit is already deeply compromised by the Chinese government’s conduct with respect to the C20 and the L20, tarnishing the G20’s accomplishments. It should be unacceptable to G20 members that established practice be so significantly undercut by a single member. China’s hostility toward independent voices should not be allowed to pass unnoticed, particularly by governments that have already publicly expressed concern about Beijing’s crackdown. [Source]

At Human Rights First, Daphne Eviatar highlights a number of steps the U.S. can take in light of the human rights situation in China:

When he arrives in Hongzhou on September 4, President Obama should make clear to President Xi that the U.S. government supports independent civil society organizations focused on advancing human rights. As Human Rights First made clear in a recent letter to the president, he can do that in three clear ways:

1) Invite Chinese civil society and rights activists who are not in prison to meet with him;

2) Publicly call for the release of detained and imprisoned activists and an end to the arrests and trials of human rights lawyers on pretextual charges such as “subverting state power;” and

3) Speak out publicly against the anti-NGO law and other overly-restrictive laws in China that threaten civil society and rights activists.

To be most effective, President Obama should coordinate his statements of opposition with other G20 countries that share these concerns. [Source]

Although China is working hard to make sure non-economic topics do not overshadow its G20 agenda, geopolitical issues are bound to come up in sideline meetings. In addition to human rights issues, other topics to watch for at the G20 include China’s delayed nuclear deal with the U.K., THAAD deployment to South Korea, and growing tensions between China and Australia over the South China Sea dispute. From Ting Shi and David Tweed at Bloomberg:

Prime Minister Theresa May will attempt to smooth over tensions that erupted after she postponed approval of the 18-billion-pound ($24 billion) Hinkley Point nuclear powerplant in southwest England. China’s 6-billion-pound investment in the facility was the biggest deal announced during President Xi Jinping’s visit last October, when he proclaimed that the U.K.-China relationship was in a “golden era.” May has since sent aletter to Xi and Premier Li Keqiang expressing her desire to enhance ties. What Xi will want to hear is that she is inclined to proceed with the project.

Relations between Seoul and Beijing have become so frosty, so fast, there are doubts over whether Xi will meet at the G-20 with South Korean counterpart Park Geun Hye, who has in the past been received warmly. That’s after Park said she’d deploy a U.S. missile shield on her country’s soil. While it’d be for protection from North Korea, China says the Terminal High Altitude Area Defense system could be used against it. There’s been some talk already of punishing South Korea, which needs Chinese trade, tourism and investment. Russia’s also not a fan of having Thaad in North Asia.

Tensions are brewing between Australia and China amid Australia’s criticism of China’s actions in the disputed South China Sea, and given the government’s decision to block the potential sale of an electricity grid to a Chinese company on national securitygrounds. China’s Commerce Ministry warned that decision would “severely” reduce the appetite for Chinese companies to invest in Australia. Prime Minister Malcolm Turnbull may use any meeting with Xi to attempt to allay concern that Australia is anti-Chinese investment. [Source]

As part of government efforts to leave world leaders with a good impression of Hangzhou, the city has undergone a massive facelift with infrastructure updates and beautification projects. City workers have been granted extended vacations in an effort to reduce crowds, factories have been closed to ensure blue skies, and some shops have been temporarily shut down for security reasons. While the preparations that have gone into hosting the G20 have inconvenienced some, others have benefited from the city’s transformation. From The Guardian’s Tom Phillips:

The city’s transformation has been music to the ears of residents of Mantoushan, a low-income community close to the cavernous International Expo Centre where the heads of the world’s leading economies will convene.

Construction teams have invaded the area in recent months, paving roads, digging sewers, and throwing up brand-new three-story abodes for some of its 6,800 inhabitants.

“The government is taking care of us,” enthused Chen Meixian, an 84-year-old grandmother-of-six, as she sat on the porch of one such home, gifted to her as part of the G20 upgrade. “We never thought we’d see this kind of change.”

[…] Commuters in Hangzhou, one of China’s most congested cities, were more upbeat. Authorities have ordered thousands of cars off the roads, declared a seven-day holiday and offered locals some 10bn yuan in incentives to leave townin order to rid the city of traffic jams ahead of the summit.

“I feel pretty happy,” said Yu Luhong, a taxi driver, as he glided effortlessly through the city’s usually congested roads. “The traffic was awful here before,” he added, cruising at 80kmph over a flyover he usually crawls across at 10kmph. “Now look.”[Source]

At The New York Times, Jane Perlez and Yufan Huang look at the unusually stringent security measures implemented in Hangzhou ahead of the summit, some of which target members of the Uyghur minority:

The government is using all the levers of its authoritarian system, forcing residents to move out of buildings near the meeting site to diminish the risk of protests or attacks and telling workers to take vacations to help clear the city and present a sanitized version of one of China’s most vibrant economic hubs.

[…] Yet some of the security measures here seem picayune. Two weeks before the meeting, the kitchen division of the Metro Center department store was devoid of knives. They had been banned for sale since June, a saleswoman said. At a Starbucks in the center of the city, the food counter was empty. Delivery trucks had been unable to crack the security cordon, the barista said.

A major focus of security has been the Uighurs. At the Beijiang restaurant, with wall murals of China’s western deserts and a halal menu, 10 Uighur cooks were sent home in June at the request of the government, said the manager, Cai Ziwei.

Only afterward was the establishment placed on a list of restaurants recommended for Muslim delegates to the meeting, he said.

Hotels were told two months ago that they must inform the police if a Uighur tried to register, a worker at the Hanting hotel chain said. [Source]