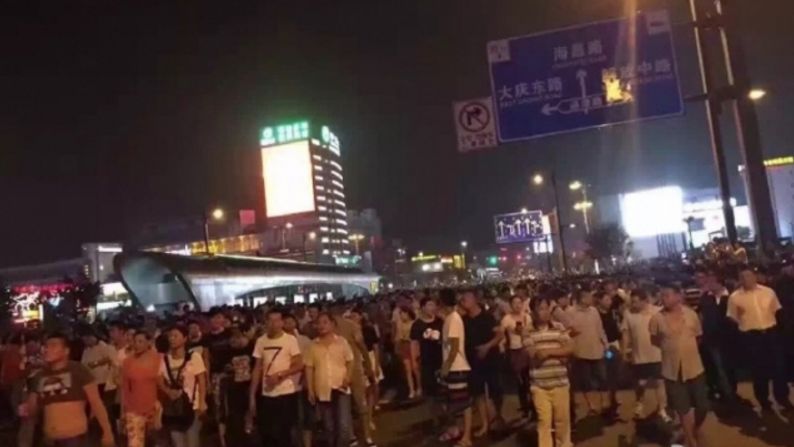 The local government of Lianyungang has suspended plans to build a nuclear waste reprocessing plant in the city after thousands of residents took to the streets to protest against the project. The sudden halt was announced to the public in a one-sentence online statement on Wednesday. The New York Times’ Chris Buckley reports:

No reason was given, but it appeared clear enough. In recent days, residents have taken to the streets to oppose any decision to build the plant nearby. The main urban area of Lianyungang is just 20 miles southwest of a large and growing nuclear power plant on the coast, but the idea of a nuclear fuel reprocessing facility also being built in the area seemed to push public unease to a new height.

[…] “While the Chinese government does not hesitate to arrest the few political dissidents, it spends more time and energy to appease public demands,” Wenfang Tang, a professor of political science at the University of Iowa, who studies public opinion and politics in China, said in emailed comments.

“The high level of government sensitivity and responsiveness to public opinion further encourages political activism in Chinese society,” Professor Tang said. “The louder you are, the more quickly the government will respond.” [Source]

Although a number of other Chinese provinces are still under consideration for the proposed initiative, the announcement to suspend the project in Lianyungang could potentially turn into a complete cancellation of the Sino-French deal if public protests over health and safety concerns erupt in the remaining cities under consideration. Christopher Bodeen at AP reports:

The government has spent heavily to build up its ability to produce fuel and process waste and the state-owned China National Nuclear Corp. has been seeking to build a nuclear fuel reprocessing center with French partner Areva starting in 2020. State media say a unit of CNNC and its French partner have looked at more than 10 potential locations for the reprocessing center and did preliminary research last year on Lianyungang.

[…] In 2013, similar plans to build a nuclear fuel reprocessing facility in the southern city of Heshan, near Hong Kong, were scrapped following protests by residents over possible risks.

Chinese authorities also have scrapped or postponed other petrochemical and other industrial projects elsewhere following protests, but in some cases work goes ahead after tensions die down. [Source]

South China Morning Post’s Li Jing writes that a lack of transparency was the main cause of the Lianyungang protests and the project’s subsequent suspension. Related social media posts were heavily censored during the demonstrations.

Residents used social media platforms to question the process but the comments were soon deleted by censors. “What if there is any radiation leakage? Why does the government want to make a decision on such a big issue on its own, a decision that will affect ­future generations?” they asked.

[…] The process has been shrouded in secrecy, with Lianyungang residents discovering that their city could be the site for the plant after the State Administration of Science, Technology and Industry for National Defence announced in a press ­release that a deputy head visited the city on July 26 and claimed “much progress has been made on site selection”.

[…] Xiamen University energy policy specialist Lin Boqiang said the plan was shelved as a result of a lack of transparency and communication by the government and state-owned nuclear companies. [Source]

The protests in Lianyungang are the latest in a series of environmental demonstrations in recent years that underscore the Chinese public’s growing awareness of environmental issues and the strategies available to them to oppose unwanted government projects. From Brian Spegele at The Wall Street Journal:

Large environmental protests are growing in frequency in China, and the ones in Lianyungang—about 250 miles north of Shanghai—highlight anxieties over the country’s nuclear ambitions. Several residents said they are concerned in light of the 2011 Fukushima meltdown in Japan.

“I love this city and I don’t care how great the GDP is,” said one local resident who didn’t want to be named. “I just want a quiet and healthy neighborhood without risks.”

[…] Chinese cities have been the scene of a string of recent environmental demonstrations. The not-in-my-backyard movements have put local leaders on the defensive as they seek both economic development and social calm.

Nuclear is an increasingly important part of China’s energy mix, and industry experts say many more reactors will be needed if the country is to wean itself off coal, a major source of air pollution and carbon emissions. There are 20 reactors under construction in China, far more than in any other nation, according to the International Atomic Energy Agency. [Source]

At Sixth Tone, Yin Yijun and Fan Yiying report that several Lianyungang protestors were injured after violence broke out during the demonstrations:

“You see, yesterday [Sunday] many innocent people were dragged, badly beaten, and taken away,” a man who had joined the demonstration on Sunday night told Sixth Tone without giving his name.

Videos that were widely circulated on social media showed SWAT police chasing after citizens and violently beat them as they were lying on the ground. Eyewitnesses confirmed the brutal beatings. Sixth Tone could not independently verify footage showing a policeman put a handgun to a protester’s head. “It was such chaos. It’s not possible to tell who attacked first. These SWAT units, to be frank, don’t have good manners,” the man, who works as a taekwondo teacher, said.

[…] A student surnamed Zhang said that the large crowd on Sunday included people who brought knives, got into fights, and threw water bottles and eggs, and that video footage of the violent clashes was authentic. “There were videos of the same thing, taken from different angles. Some were taken by my friends. How could they be fake?” the 18-year-old said. [Source]