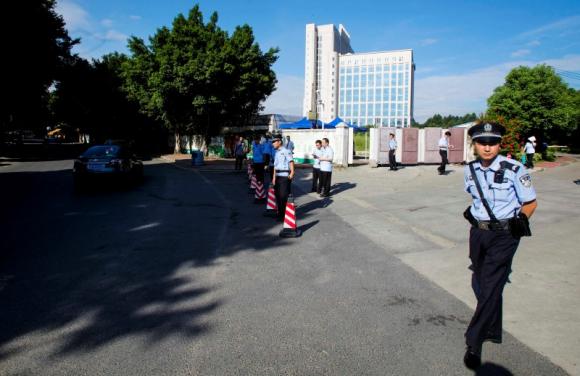 When President Xi Jinping met his American counterpart at the G20 summit in Hangzhou this month, he expressed his opposition to other countries “interfering in [China’s] internal affairs in the name of human rights issues.” The remarks were an apparent response to efforts by foreign governments and rights groups to press Beijing on human rights issues during the event. A new State Council white paper entitled “New Progress in the Judicial Protection of Human Rights in China” seems intended to challenge rather than dismiss China’s critics, highlighting legal reforms and praising “the new progress made in human rights protection in the field of justice.” From Xinhua:

It said that in recent years, especially since the 18th National Congress of the Communist Party of China (CPC), progress has been made in modernizing the system and capacity of state governance. The country has effectively protected the people’s rights and freedoms in an extensive array of fields in accordance with the law, while its people duly fulfill their obligations.

In particular, the white paper noted that since the CPC’s 18th National Congress, the allocation of judicial powers and responsibilities have been further improved, and the independent and impartial exercise of the judicial and procuratorial power ensured.

[…] The white paper also highlighted pilot programs to reform the system of people’s assessors and supervisors, the establishment of a national judicial assistance system, and the abolishment of the system of reeducation through labor.

The white paper comes amid what has been called one of the “harshest” crackdowns on China’s civil society seen in recent years. Despite President Xi Jinping’s long-proclaimed commitment to rule of law, his administration has targeted human rights lawyers and their assistants since July 2015 in an unprecedented crackdown on China’s legal profession. Four of those lawyers have been sentenced on charges of subversion in August with more trials expected in the coming months. The trials have been branded as politically motivated with allegations of forced confessions and inaccurate court transcripts, among other procedural violations. Beyond the assault on rights defenders, Sarah Cook at The Diplomat writes that the Chinese government’s persecution of religious and ethnic minorities–including Tibetans, Uyghurs, and Falun Gong practitioners–has been even more severe in terms of its magnitude and time span.

Michael Martina at Reuters reports on the white paper’s emphasis on new judicial procedures to eliminate illegally obtained evidence and safeguard the rights of criminal suspects:

China has tightened judicial procedures against illegally obtained evidence and upheld the presumption of innocence, state media said on Monday, as the country seeks to combat perceptions of human rights violations within Communist Party-run courts.

Judicial authorities have “put in place a system to exclude unlawful evidence and protect the legitimate rights and interests of criminal suspects”, the Xinhua state news agency reported, citing the State Council, or cabinet, in a paper it published on legal protection for human rights.

“China has revised its Criminal Procedure Law, and implemented principles, including ‘in dubio pro reo’,” Xinhua said, using the Latin term that generally refers to the presumption of innocence.

According to the cabinet paper, in 2014 the Ministry of Public Security issued regulations for fitting interrogation rooms and detention centers with audio and video recording equipment to prevent misconduct such as “extorting confessions by torture and obtaining evidence through illegal means”. [Source]

Existing reforms have failed to dispel serious concerns about abuses in custody and resulting miscarriages of justice, but proposals from within the country’s legal and political systems for more radical changes have been rebuffed. The white paper does note some new steps to improve the treatment of detainees, Xinhua reports:

Named New Progress in the Judicial Protection of Human Rights in China, the white paper said the country will enhance scrutiny of supervisory activities and the execution of punishment, standardize commutation, parole, and execution of sentence outside prison.

The country will stipulate that criminal defendants and appellants no longer need to wear clothing bearing the name of the detention house, so as to safeguard the detainees’ personal dignity, safety, legal property, and legitimate rights including the rights to defense, to appeal, to complain, and to report violations of law, the white paper said.

[…] It added that medical services and life management in prisons and detention houses will be standardized in a bid to safeguard detainees’ right to health.

The country will also standardize commutation, parole and execution of sentence outside prison and safeguard detainees’ rights to implementation of penalty change, the white paper said. [Source]

The white paper also argues that China’s use of the death penalty is not as widespread as commonly believed, claiming that the punishment only applies to a very small number of extremely serious cases and is employed “with prudence.” From The Associated Press:

Although China no longer executes people for most nonviolent crimes, its law allows for the death penalty for dozens of offenses, including treason, separatism, spying, arson, murder, rape, robbery and human trafficking.

A legal revision last year removed a number of offenses from the list of those punishable by death, included smuggling arms and ammunition, counterfeiting currency, forcing others into prostitution and obstructing military personnel in the performance of their duties.

[…] The number of executions in China is not known because such data is considered a state secret. Amnesty International estimates that it executes more people than the rest of the world’s countries put together, which totaled 1,634 in 2015.

Human rights groups say death sentences are often issued after unfair trials and that too much weight is given to confessions that are often obtained through torture. [Source]

Xinhua has more on recent amendments to limit the scope of the death penalty:

China in 2011 adopted the Amendment (VIII) to the Criminal Law which abolishes the death penalty for 13 economy-related, non-violent offenses.

The Amendment (IX) to the Criminal Law, adopted in 2015, also reduced the number of crimes for capital punishment, abolishing the death penalty for nine areas of crime. It also extended the possibility of reprieve in cases of capital sentence.

When the Supreme People’s Court reviews a death penalty case, it focuses on interrogating the defendant in accordance with the law, and listening to opinions of the defense counsel, according to the white paper. [Source]