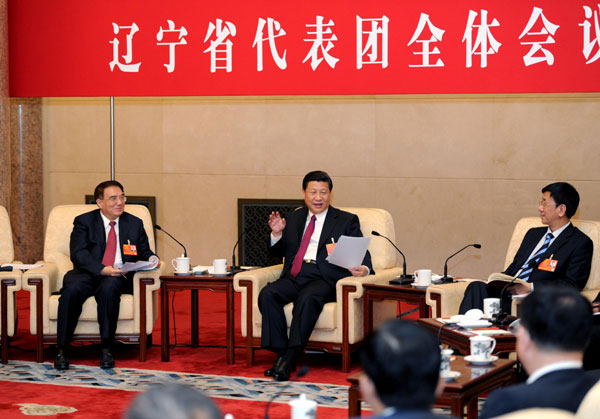 At a provisional meeting of the National People’s Congress, the Liaoning delegation was disbanded after nearly half the province’s delegates were implicated in a vote-buying scheme. From Xinhua:

A report by the National People’s Congress (NPC) credentials committee said it believes that actions by the 45 deputies violated the electoral law and their election should therefore be nullified by the NPC Standing Committee.

An NPC Standing Committee session that closed Tuesday voted to unseat the 45 NPC deputies elected by the Liaoning Provincial People’s Congress for vote buying and bribery during the 2013 election. [Source]

Choi Chi-yuk at the South China Morning Post has more:

At yesterday’s extraordinary NPC meeting, it was revealed that of the 62 standing committee members of Liaoning’s people’s congress, 38 were disqualified because of the fraud, according to state-run Xinhua.

In addition, 523 Liaoning lawmakers helped rig elections that sent 45 colleagues to the national legislature. The dismissed deputies account for about 5 per cent of the organisation’s total and many were business executives.

The 523 Liaoning deputies implicated in the election fraud had since either resigned or been disqualified from serving on the legislature, Xinhua reported.

The NPC Standing Committee resolved yesterday to set up a preparatory, or caretaker, panel to prepare for a new session of the Liaoning provincial legislature. [Source]

Reuters explains the process by which provincial delegates are elected to the national legislature:

China does not have fully democratic one-person, one-vote elections but has experimented with a selection process at the grassroots for local legislatures, even if most candidates are Communist Party members and there is rarely more than a single candidate for each position available.

The Liaoning incident echoes a case in 2013 where more than 500 lawmakers in a city resigned after being implicated in a bribery scandal, while another 56 provincial legislators were sacked.

Provinces, cities, counties and other administrative districts all have their own People’s Congresses, and they all generally act as a rubber stamp for party decisions rather than providing a forum for debate or making policies.

The competition, though limited, to become lawmakers in some places has opened the door to corruption, as membership of such assemblies brings opportunities to influence decisions about things such as business contracts and promotions. [Source]

At The New York Times, Michael Forsythe further explains why China’s wealthy elite may be willing to bend the law in order to gain a coveted spot on the NPC:

Often derided as a rubber-stamp legislature, the congress and its companion advisory body have in recent years become a club for some of China’s wealthiest executives, keen to rub elbows with government officials. Holding such high office also brings prestige and, much like peerage or knighthood in Britain, is seen as a marker of status in the Communist Party-dominated establishment. In China, it is sometimes known as “wearing the red hat.”

“People within the system can trade interests,” Zhang Ming, a political scientist at Renmin University in Beijing, said by telephone. “Whoever gets elected will have a pass to do so.”

Serving as a lawmaker has become so attractive to the wealthy that last year, of the 1,271 richest Chinese people tracked by the Shanghai-based Hurun Report, a record 203, or more than one in seven, were delegates to the National People’s Congress or its advisory body. The richest person that year among all three branches of the United States government, Representative Darrell Issa of California, would only rank as the 166th richest if he were a Chinese lawmaker. [Source]

While the NPC has been a mainstay in the Communist Party’s system of governance, the lack of transparency inherent in the system will inevitably lead to such fraud, according to experts interviewed by Nectar Gan and Zhou Xin at the South China Morning Post:

Beijing clings to the people’s congress system under the Communist Party’s rule as its argument against Western, multi-party democracy and direct election of government leaders. It insists that the system suits the needs of its people and operates well.

But Renmin University political scientist Zhang Ming said the election fraud in Liaoning was ­unlikely to be a lone case because the practice of vote buying was widespread across the country.

“I think [the fraud in Liaoning] has been exposed as a warning to other provinces, but it won’t be ­effective, because fraud is inevitable – the election system itself is at fault,” Zhang said.

Beijing-based political analyst Zhang Lifan agreed. “It is the lack of transparency and openness in the NPC’s election system that created the preconditions for vote buying and trading in power for money,” he said. [Source]

For more on the NPC and the recent scandal, see “Status, power, connections … what’s behind the unprecedented voting fraud in electing China’s most powerful organ?” by Gan at SCMP.