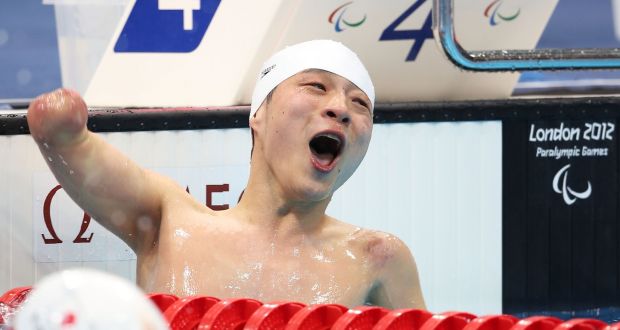 China, which has topped the medal counts at each of the previous four Summer Paralympic Games, dominated the competition last month in Rio. Chinese athletes took home a total 239 medals, 92 more than closest rival Britain. 107 were gold, making China only the third country ever to break the 100 mark. Some among the Chinese public sympathized with their disabled compatriots, and criticized the lack of official coverage of the Paralympic victories this summer.   At The Irish Times, however, Clifford Coonan reports that disabled people are still largely ignored or stigmatized by society at large. Coonan further notes a new plan from the State Council that could encourage the abortion of fetuses found to have disabilities:

[…] According to the CDPF [China Disabled Persons Federation], nearly 30 per cent of disabled children aged six to 14 have no access to nine years of compulsory schooling, because schools refuse to accept them. Only 58 per cent of children with disabilities in China go to conventional schools.

These kind of statistics have engendered sympathetic postings on the social network Weibo. A commentator called Shanzha wrote: “The number of gold medals won can’t make up the fact that China lacks an infrastructure for disabled people and lacks social benefits. Developed countries have a more complete system, China still needs to make a lot more effort.” […]

[…] This month China’s cabinet, the State Council, issued a national action plan “aiming to effectively reduce new disabilities by 2020 through promoting awareness and early screening”. The government is introducing pre-natal check-ups and health checks to screen for hereditary conditions which will respectively cover 60 per cent and 80 per cent of females over the next five years, the Xinhua news agency reported.

The implication is that pregnancies where disabilities are discovered would be terminated. […] [Source]

From the State Council’s English-language explanation of the plan, released last month:

Currently, there are more than 85 million disabled people across the country. The large number of disabled people is a huge burden on society, and many of the disabilities could have been prevented with proper measures.

To deal with the issue, the State Council made the national action plan, whose goal is to improve the nation’s disability prevention system, increase society’s awareness about preventing disabilities, and keeping the disability rate at a lower level than other countries at the same income level.

The action plan focuses on the following aspects:

To effectively prevent disabilities due to birth defects, efforts will be made to strengthen prenatal and pre-pregnancy checks and survey of newborns’ illnesses. Measures will also be taken to prevent infectious, endemic, chronic, and mental diseases that can lead to disabilities. […] [Source]

That plan from the State Council followed the top administrative body’s August outline on “improving the lives of disabled people,” which included measures to help them find employment and “provid[e] basic public services in disability prevention, rehabilitation and education.” Last month, Caixin’s Sheng Menglu and Li Rongde reported on a study finding a majority of Chinese parents uncomfortable with their children studying alongside disabled peers:

Two-thirds of parents in China said they would be concerned if mainstream schools allowed disabled children to study alongside those who are not, an advocacy group’s survey found.

Only 8 percent said they do not want their children to study alongside disabled children at mainstream schools. But over 54 percent said they would be concerned about a drop in teaching quality if teachers had to provide special assistance to the disabled, a report published Wednesday by Save the Children, a London-based nonprofit, shows.

Nearly half the parents also said they were concerned their children may pick up bad habits by mingling with disabled children.

Opposition from some parents, bullying and the lack of support facilities have all led to disabled children being shut out of mainstream education, the report said. […] [Source]

At Sixth Tone, Fu Danni tells the story of Dong Ming, a certified accountant with a type of cerebral palsy affecting his speech and motor skills, who has acutely felt discrimination in his professional life despite state efforts to mitigate it:

Before the first half of Dong Ming’s class was over, all three of his new students had walked out. “Perhaps they were disappointed when they saw me, so they left,” Dong, who has a speech impairment, scribbled out on a notepad he showed to a Sixth Tone reporter.

[…] Dong hasn’t been able to secure a fitting job since he was certified in 2010. Some companies have told him outright that they recognize his skills but won’t employ someone with impaired speech. After years of dogged job hunting and even trying his hand at running a small bookstore, in December 2012 Dong took a minimum-wage job at a metals factory, one of China’s many social welfare enterprises aimed at employing disabled workers.

The central government’s current five-year plan reports that roughly 2 million disabled citizens are living in extreme hardship. A range of national and provincial policies in China aim to address employment discrimination against people with disabilities through targeted job placement assistance, social welfare enterprises, and a quota system that gives companies tax breaks for hiring employees with disabilities, but they haven’t always hit their mark. [… ] [Source]

Read more about disability in China, via CDT.