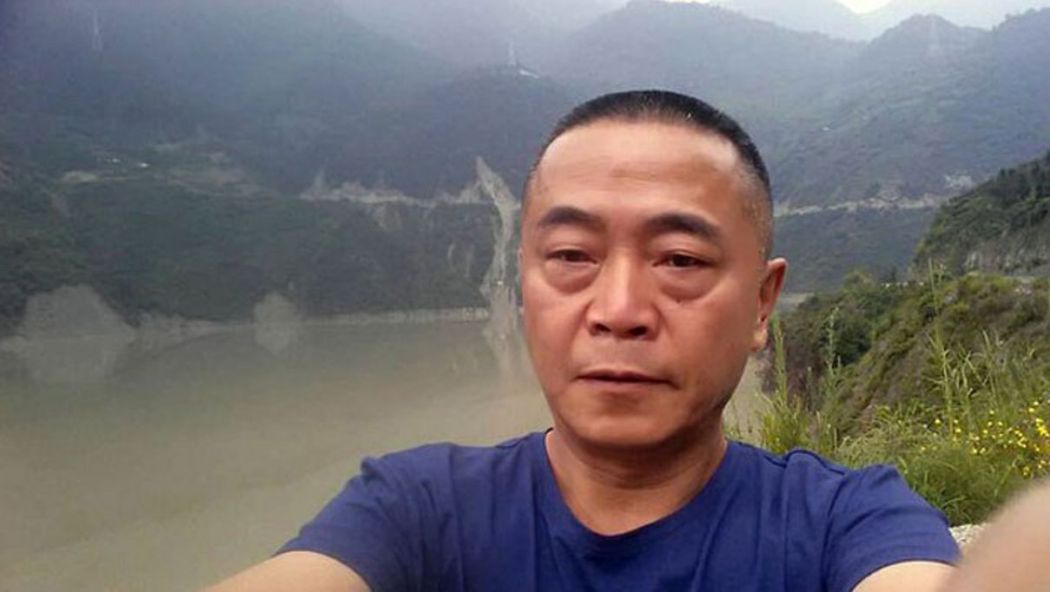 News of his disappearance was posted on Twitter by Pu Fei, a volunteer at the 64 Tianwang site, but the tweet was deleted and Pu was unable to be contacted since then, according to information posted by Hong Kong-based rights watch website Weiquanwang. A call made to Pu appeared to suggest that his phone was turned off.

According to the two witnesses, officers from Mianyang and Neijiang – areas hit by the 2008 Sichuan earthquake – were present. Huang was jailed in November 2011 after he investigated allegations that poor construction contributed to the deaths of schoolchildren in the disaster.

Huang was recently detained during a major meeting of Communist Party elite in October. Photos showed that his home had been searched, with items scattered on the floor. His computer was also taken by authorities. [Source]

Huang’s 83-year-old mother is now also reportedly under close surveillance, and had to be taken to hospital after being dragged out of their home as it was searched. Huang recently told Hong Kong Free Press that nine of his contributors were currently in detention, with another five on bail. Nevertheless, he expressed optimism, claiming that “this kind of suppression is a necessary condition to help us grow and help us perfect our work.”

This longstanding attitude of his was sharply criticized by fellow citizen journalist Liu Feiyue in a profile of Huang at The Huffington Post last year. Liu described Huang’s assessment of the prospects for human rights in China as “a lie that’s not based in reality,” and a possible attempt to “win favor with the government.” Liu was himself detained last month, as the Associated Press reported late last week:

Liu Feiyue, founder of the website Minsheng Guancha, was taken away earlier this month by police in the city of Suizhou, Hubei province. The site said Liu’s family had been told he was under investigation for subversion, a vaguely defined charge often levelled against human rights activists and dissidents.

Liu has published stories about China’s detentions of dissenters and activists, one of a few people living in mainland China to do so. His website has alleged that China has committed hundreds of perceived troublemakers to mental hospitals under the guise of giving them psychiatric treatment. He has also documented local corruption cases and protests by veterans seeking benefits after their discharge from the military.

[…] Patrick Poon, a researcher for Amnesty International, said the cases of Liu and Jiang [Tianyong, a missing rights lawyer] were “worrying”, and a possible sign of “another wave of crackdown against human rights defenders”. [Source]

Robert Mahoney of the Committee to Protect Journalists said in a statement on Monday that “China’s frequent use of sweeping statutes such as ‘subversion of state power’ is evidence of its growing intolerance of reporting on political protests and human rights abuses. The authorities should release Liu Feiyue immediately and unconditionally.” The following day, he added that “the arrest of Huang Qi signals a renewed effort to punish those who publish material the Chinese government does not wish to see made public. We call on Chinese authorities to release Huang immediately and to cease jailing online journalists for reporting the news.”

Some of Huang’s supporters believe that 64 Tianwang’s intensive coverage of mistreatment of petitioners may have triggered his detention. Others, though, have emphasized its apparent place in a broader scheme:

The detention of two of China's last Human Rights NGO leaders #HuangQi and #LiuFeiyue within a week not a coincidence. Worrying development

[…] Mr. Huang and Mr. Liu headed rights organizations that have come under increasing scrutiny, and their detentions may be related to the pending implementation of a law on nongovernmental organizations that puts new restrictions on foreign groups operating in China. Such groups will be required to register with the Ministry of Public Security, and the police will have the right to scrutinize their operations, including financing, at any time. They must also find a Chinese partner. The law also makes Chinese groups that receive funding from outside the country more vulnerable.

The disappearances of Mr. Liu, who leads Civil Rights and Livelihood Watch, and Mr. Huang, who runs the 64 Tianwang Human Rights Center, may be a prelude to the law’s implementation.

“This may show the mind-set of the authorities as they come close to implementing the NGO law,” William Nee, a researcher for Amnesty International who is based in Hong Kong, said by telephone. [Source]

The new foreign NGO management law, which will take effect on January 1st, is part of a broader wave of civil society regulation. Some observers suggest that new rules will clarify organizations’ legal standing while still leaving some room for maneuver, but others are alarmed by their apparently adversarial view of civil society as a source of potential security threats. This prompted one veteran Chinese NGO worker, in an open letter translated by CDT in May, to try to assure legislators that “we are not enemies of the state.” New guidelines on the foreign NGO law’s implementation this week reiterate the sensitivity of foreign funding, which has been a focal point in several cases this year. These include the detention and deportation of Swedish legal NGO head Peter Dahlin in January and the more recent trials of Guangdong labor activists. A report from RFA’s Yang Fan, Hai Nan, and Luisetta Mudie suggests that foreign funding may also be a key factor in Liu’s detention:

A volunteer who answered the phone at the Civil Rights and Livelihood Watch offices said Liu stands accused of receiving overseas funding to run the group.

“They are saying he received overseas funding,” the volunteer said. “They have searched his home and taken a lot of documents, including payslips and so on.”

“They say that he has harmed national security by accepting the funding.”

The volunteer said that no official documents have yet been issued relating to Liu’s detention, however.

“They just informed [the family] verbally, and we don’t have any more information than that,” the volunteer said. “The police haven’t even told us where he is being held.” [Source]

Foreign ties were also central to the conviction of veteran journalist Gao Yu last year for leaking state secrets. A Beijing judge told Gao this week that her medical parole could continue, but she remains under what Reporters Without Borders’ Benjamin Ismaïl called the “barely veiled threat” of reimprisonment.