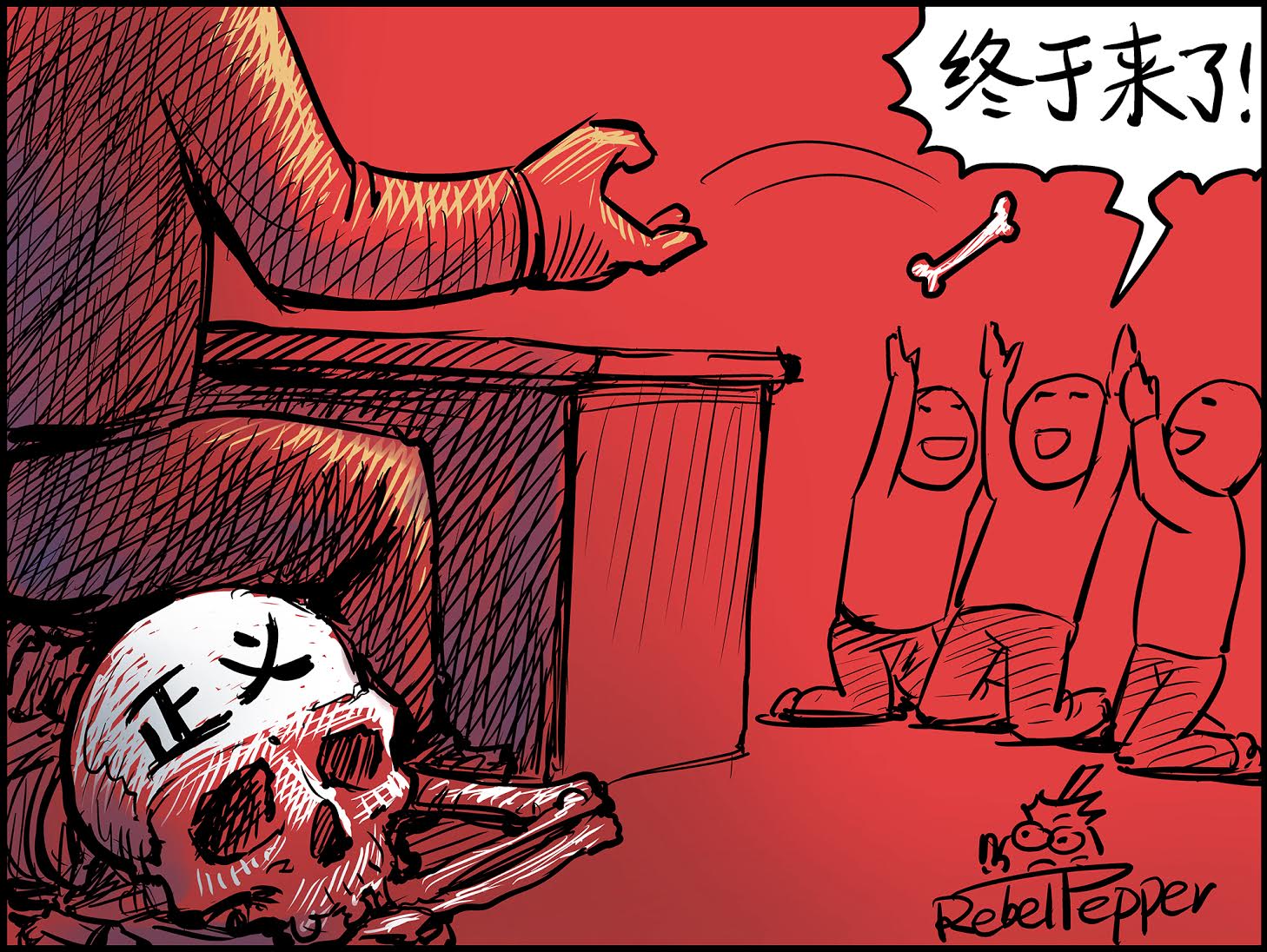 Cartoonist Rebel Pepper comments on the recent exoneration of Nie Shubin, who was convicted and executed 21 years ago for rape and murder: In Rebel Pepper’s drawing, three people kneel at the foot of a judge, rejoicing that, “It has finally arrived!” as the judge throws them a bone from a skeleton labeled “justice.”

On Friday, the Supreme Court of China officially exonerated Nie, 11 years after another man confessed to the murder. Nie’s parents had waged a long campaign proclaiming their son’s innocence. Nectar Gan at the South China Morning Post summarizes the case:

The Supreme People’s Court on Friday overturned the guilty verdict on Nie Shubin, a farmer from Hebei province who was convicted in March 1995 of raping and murdering a woman in Shijiazhuang in Hebei province.

Nie, then 21, was put to death in April that year after Hebei province’s highest court dismissed his appeal.

But 10 years later, a man arrested for another crime, Wang Shujin, confessed to the murder that Nie was convicted of carrying out, creating a public outcry.

The high court in Hebei then promised to review the case, but little progress was made for the next nine years despite repeated petitions by Nie’s family. They demanded a retrial to exonerate him. [Source]

As Michael Forsythe explains in The New York Times, Nie’s case exemplifies some of the persistent problems with China’s justice system, where forced confessions contribute to a 99.9% conviction rate, despite efforts at reform:

Legal experts say that despite some improvements in China’s criminal justice system, the underlying problem is that the system is not independent but controlled by the Communist Party.

Xu Xin, a lawyer and scholar in Beijing who studies capital punishment, said that meant that rulings were often made for political reasons. That was true in Mr. Nie’s case, he said. Part of the reason for the 11-year delay between Mr. Wang’s confession and Mr. Nie’s exoneration was resistance from the local police and prosecutors who handled the original case, Mr. Xu said.

“Those who have caused unjust cases do not want to redress them,” said Mr. Xu, who for years posted frequent messages on social media asking for Mr. Nie’s case to be reopened. “There still isn’t an independent judicial system. If we don’t have such a system, it is still difficult to avoid such cases.”

In 2014, in a similar case, courts overturned the conviction of Huugjilt, an 18-year-old in Inner Mongolia who was executed by firing squad in 1996 for rape and murder. In February, Chen Man, who had spent 21 years in prison on a suspended death sentence, was released after his lawyers claimed he had been tortured into confessing. These cases along with other recent wrongful convictions have generated public outrage and proposals for reform from delegates to the National People’s Congress and Chinese People’s Political Consultative Conference.