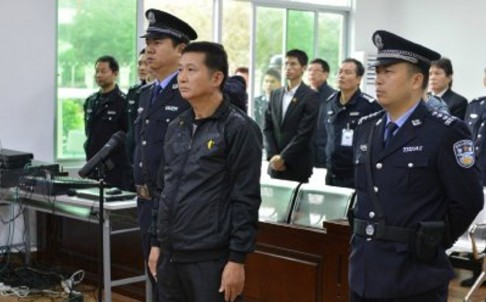 South China Morning Post’s Jun Mai reports the acquittal of accused murderer Chen Man after 21 years in prison on a suspended death sentence. Chen’s is the latest in a series of wrongful convictions that have sparked public anger and promises of reform.

In a prison courtroom, Hainan’s top judge, Fu Qin, bowed to Chen in apology on behalf of the court, which issued the death sentence 21 years ago, said Chen’s lawyer, Wang Wanqiong.

[…] The fairness of Chen’s trial was questioned at the time, with his lawyer identifying 18 contradictions in his testimony, Thepaper.cn reported yesterday.

Wang said Chen was tortured into confessing. “He was strangled until he almost suffocated and his joints were beaten with sticks and steel rods,” she said.

[…] The authorities have yet to announce an investigation into the judges, prosecutors and police officers involved in the original verdict. “Chen said those people should be held responsible, but he had no hatred towards them and believed it should be left to the law to decide,” Wang said. [Source]

Xinhua reported some such accountability on Sunday. Mongolian teenager Huugjilt was executed for rape and murder in 1996, also based on a forced confession. He was posthumously exonerated in 2014. Twenty-seven officials have now been penalized for their roles in his case; one, former police officer Feng Zhiming, may face criminal charges. Such judicial about-turns have been hailed by authorities and in state media as signs of progress, but this celebratory rhetoric has spurred others to ask whether real lessons have been learned. Shortly after Huugjilt’s acquittal and Feng’s detention for allegedly torturing him, the Dui Hua Human Rights Journal commented:

Accountability for acts carried out in individual cases is perhaps the easy part; much more difficult is to assess responsibility for the deeper institutional causes underlying wrongful convictions—such as the role that inter-institutional “coordination” plays in weakening the procedural checks that are supposed to protect suspects and defendants from miscarriages of justice. The worst outcome would be for accountability in the Huugjilt case to be merely a propaganda effort aimed at convincing the public of authorities’ sincerity at tackling the problem of wrongful convictions. Punishing Feng Zhiming for wrongdoing is only the first step. What’s even more essential is to bring an end to the ways that campaign-style “strike hard” policing and stability-first policies have shaped practices within the Chinese criminal justice system for decades. [Source]

Despite reforms meant to prevent the use of forced confessions and some related prosecutions, a U.N. report concluded last year that torture “is still deeply entrenched in the criminal justice system, which overly relies on confessions as the basis for convictions.” Both Amnesty and Human Rights Watch also reported in 2015 that pre-trial torture remains routine. Similar concerns linger around the Party’s own disciplinary apparatus.

Ira Belkin of the US-Asia Law Institute told The WorldPost in November that the efforts to prevent forced confessions are nevertheless “actually a positive story of legal reform […]. But it does raise the question: Can you make significant positive strides in these cases while all this other negative stuff is going on?” Even as they disavow the use of forced confessions, for example, authorities have embraced the practice of televised confessions in political cases. Some suspects appear to have been coerced using, if not physical torture, then threats to family members or access to vital medication. Citing an essay posted by China Media Project’s David Bandurski last March, The Economist’s Banyan wrote last week that “these confessions have nothing to do with justice or truth”:

The main reason for the spate of confessional television in China is, in fact, political: it is a conscious policy of the regime of Xi Jinping, China’s ruler for the past three years. In an illuminating essay last March, David Bandurski of the China Media Project at the University of Hong Kong pointed out that what he called “China’s confessional politics of dominance” has its roots in the Communist Party’s own history, and in the Soviet influences that helped shape it before it took power. Confession and self-criticism have been part of its ruling strategy since its revolutionary leaders lived in caves in Yan’an and plotted against their neighbouring cavemen. Virtually everybody in China—even Deng Xiaoping and, almost certainly during Mao’s rule, Mr Xi himself—has written at least one piece of self-criticism. At the other end of the scale, even Banyan has done it, when he was a student and later reporter in China, with a few eloquent self-flagellations—now (he hopes) gathering dust in some forgotten archive.

In writing self-criticism, the secret is to ponder not truth, justice or cultural norms, but what your reader wants. As Mr Bandurski put it: “As in the past, today’s culture of confession is not about accountability, clean government or a rules-based system. It is about dominance and submission.” Mr Xi’s revival of this culture is not accidental. It is a reminder that his party’s tolerance for dissent is lower now than at any time since the early 1990s. One symptom of this is its insistence that China’s people—and foreigners working in the country—must accept that, even if they cannot love him, Big Brother is right. [Source]