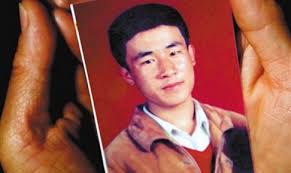 In 1996, 18-year-old Huugjilt, known as Hu Ge in Mandarin, was found guilty by the Inner Mongolia People’s Court for the rape and murder of a woman, and executed later that year. In 2005, Zhao Zhihong confessed to the killing; at a retrial held in 2014, Huugjilt’s name was cleared and his parents were awarded over two million yuan in compensation. Last year, anger from the executed teen’s parents was reported over the promotion of two judges responsible for the wrongful conviction. Citing Chinese state media, the AFP reports that twenty-seven government officials have now been “penalized” for their roles in the wrongful execution of Huugjilt twenty years ago:

“One of the blacklisted officials responsible for the wrongful conviction of Huugjiltu, Feng Zhiming, was suspected of job-related crimes and was subject to further investigation,” Xinhua reported authorities as saying in a statement.

The other 26 – among them police officers and court officials – “received administrative penalties including admonitions and record of demerit”, Xinhua said without giving further detail.

The case has highlighted the shortcomings in China’s Communist Party-controlled legal system, where acquittals are extremely rare – 99.93 per cent of defendants in criminal cases were found guilty in 2013, according to official statistics. [Source]