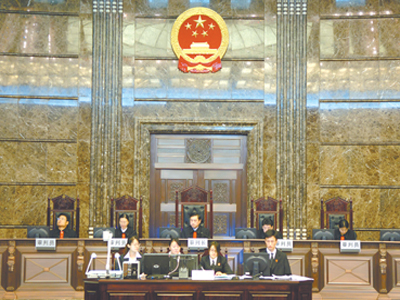 At People’s Daily Online, Luxiao Zou reports anger over the promotion of two judges who wrongly sentenced Hu Ge—also known as Huugjilt—to death for rape and murder in 1996. Another man’s subsequent confession led, eventually, to a posthumous retrial late last year, which cleared Huugjilt and awarded his parents over two million yuan in compensation.

“It is 7 month after our son has been declared innocent by court. Why these two officials who did my son wrong are still working?” Hu Ge’s mother Shang Aiyun said. “They should be held liable and go on trial for that.”

[…] Until 2005, a murderer named Zhao Zhihong confessed he was the one who killed the woman, cleared Hu Ge of the charge. It was then found that Hu Ge was possibly subject to police torture for confession.

[…] Hohhot Intermediate People’s Court responded that this was the normal and procedural appointment. It did not necessarily suggest that the two officials were free from liabilities of their misjudgment. [Source]

China’s top prosecutor acknowledged last year that preventing wrongful convictions would be a “tough task.” Official rhetoric celebrating even posthumous acquittals has fueled concern that lessons are not being learned from past mistakes, to which the promotion of Huugjilt’s judges can only add.

One major improvement in amending if not avoiding such errors is the introduction in 2007 of mandatory death sentence reviews by the Supreme People’s Court, which have averted a number of executions. Death sentences subsequently overturned include those of Nian Bin, who was exonerated last year of fatally poisoning two children, and Li Yan, whose killing of her husband was found to be mitigated by years of domestic abuse. Xinhua reported earlier this week on another such reversal, eleven years after the original conviction:

Zeng had been sentenced to death three times by the same court. The Supreme People’s Court rejected the verdicts and ordered a retrial.

Chen Huazhang, also the victim’s classmate, was found to be the real killer. Chen poisoned Zhou with diazepam on Oct. 27, 2003 as he was jealous of the attention Zhou enjoyed from their mentor. Chen deliberately laid a false trail and imputed the murder to Zeng, who was in love with the victim’s ex-girlfriend. [Source]