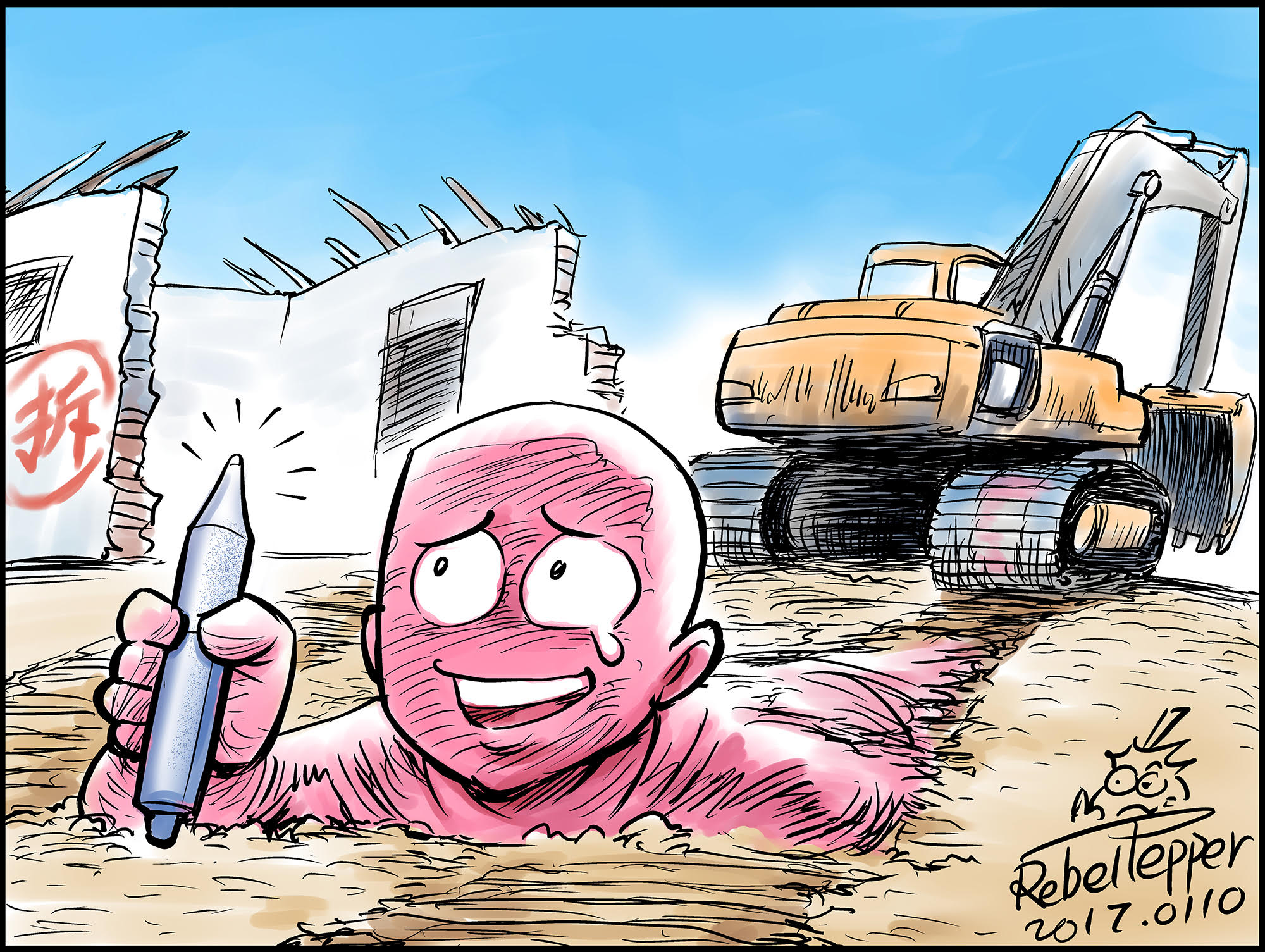 How about we tear down your house and assault your family in exchange for a ballpoint pen? To cartoonist Rebel Pepper (变态辣椒), the nationalist internet brigade known as the little pinks is happy with that exchange. Two little pinks have recently called for justice online after family members were maimed or killed in forced demolitions. On November 30, Weibo user Beitatatata (@北塔塔塔塔) posted shocking photos of her grandmother’s body laid out on a metal table, her head crushed. “In broad daylight, the Xuzhou village tyrant Zhang Shihong and his wife Wang Yan crushed my grandmother with their excavator! These murderers dig up state-owned minerals to sell at a profit and claim to be millionaires!” Beitatata’s earlier posts gush with nationalist pride and love for President Xi Jinping, and so notes of sympathy in the thousands of comments on Beitatata’s post commingled with cries of hypocrisy. “How tragic that a little pink’s family home was torn down and that people died. This splendid age is as you wished,” writes Kaweigreat (@卡位great) on Baidu Tieba.

On January 10, a Weibo user who identifies herself as Chen Jie (Kaixindebenxiaohai666666 @开心的笨小孩666666) posted images of a bulldozed garden, trees uprooted by machine, and an old man bleeding out on the side of the road. In a long post, Chen Jie writes that her parents were attacked upon their return from Beijing, where they had lead a “petition brigade” to fight a development company eager to buy their land for a pittance. “Chen Genfu and his wife, both nearly 70 years old, were on their way to the police station when two white sedans with their license plates covered blocked their way. Three masked men got out and started slashing the old couple, chopping and screaming, ‘If you petition again we’ll come back for your lives.’” Sympathy for Chen Jie’s parents has been at best tempered by her nationalistic posts prior to the attack:

Yueji7YJ (@悦己7YJ): Your country screwed you good! Now please go back and call out your friend for becoming a naturalized Australian citizen and burning his passport. [Chinese]

Is the little pink community enraged by the violence exacted on the families of their fellows? Disillusioned by the party-state they so ardently support? Apparently not. This week, their attention turned to a “triumph” for China: state-owned enterprise Taiyuan Group’s announcement that it can now manufacture the tips of ballpoint pens. From Quartz’s Josh Horwitz:

China produces an estimated 40 billion ballpoint pens annually, but many of them work poorly. Domestic manufacturers wanting to make higher-quality pens must import tip cases from Japan and Germany made of a specialized stainless steel. According to Taigang, an 83-year-old state-owned enterprise based in the Shanxi province, that’s because in better pens the cone-shaped case that holds the ball requires both special raw material and special machinery (link in Chinese). To fulfill demand, Chinese pen makers have been importing more than 1,000 tons (link in Chinese) of the needed steel annually.

[…] Taigang’s efforts didn’t come out of nowhere. A year ago in China a minor media frenzy erupted (link in Chinese) when premier Li Keqiang, a vocal proponent of bolstering technological innovation, lamented how China was producing 800 million tons of steel annually but still importing the specialized type of stainless steel needed to make the better tip cases.

[…] News of Taigang’s pen-tip “innovation” has made waves on China’s internet in the past few days. An article about the company from state media outlet People’s Daily has so far attracted over 10,000 comments and 20,000 shares on Weibo, China’s Twitter-esque social media platform. “Wow, it had never occurred to me that I had been using ballpoint pens relying on foreign technology!” wrote one user (link in Chinese) [sic]. [Source]

“The high-tech monopoly has been terminated,” rejoices Shanxiguantianpeng (@山西关天棚). “China’s scientists are so damn lovable.”

Rebel Pepper marvels at the juxtaposition of the ballpoint pen comments and the forced demolition deaths. “Please forgive my schadenfreude,” he wrote.