Badiucao: One Love, One China 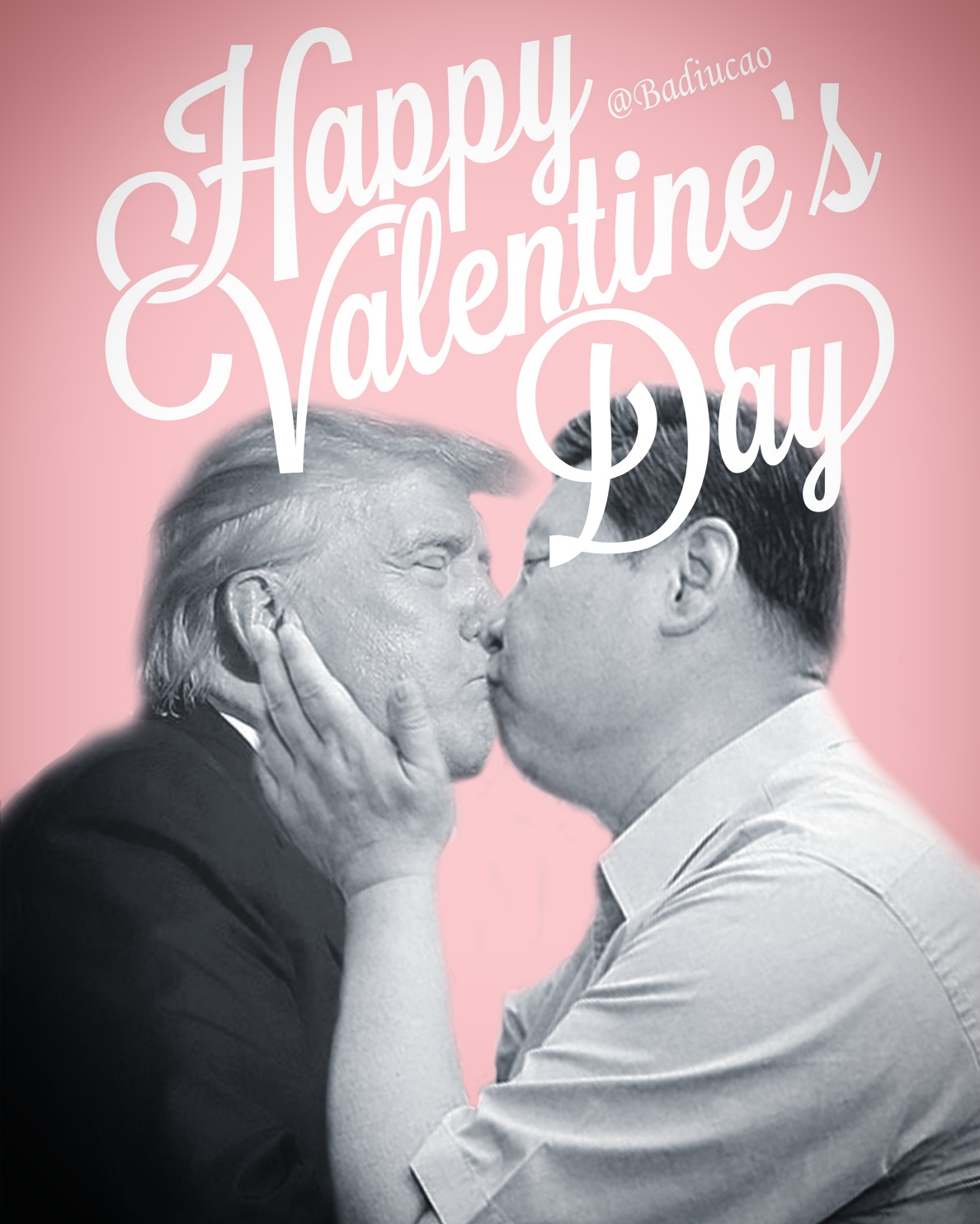 In recent cartoons for CDT, Badiucao puts a Valentine twist on President Trump’s emerging relationship with President Xi Jinping, which took a step forward in a recent phone call: 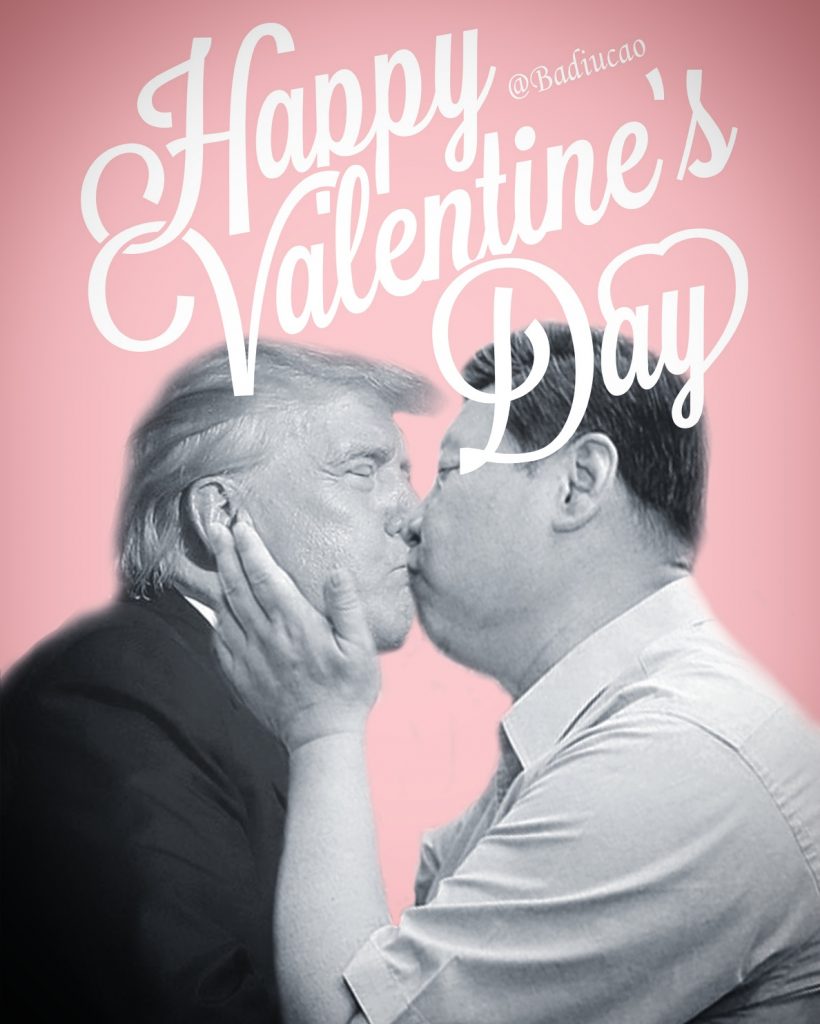 A second drawing focuses on Trump’s effort to patch up relations with Beijing by acknowledging the “one China” policy, which declares that Taiwan is part of China. Trump had earlier stated that he was “not committed” to the longstanding policy.

One China, by Badiucao 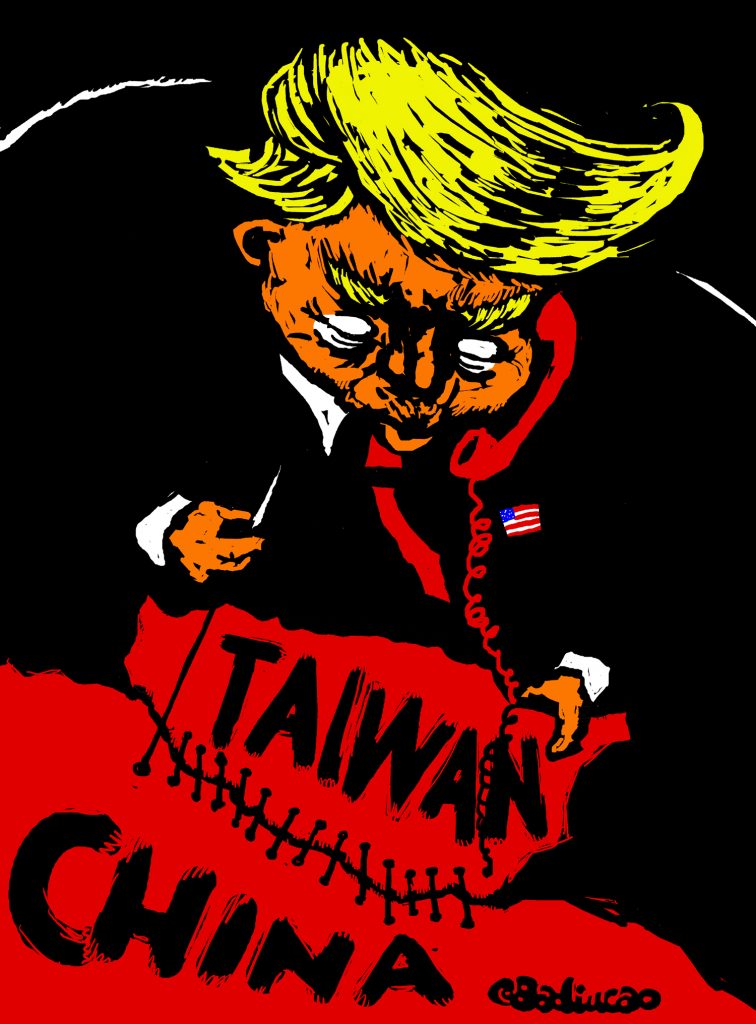 Since his inauguration in January, President Trump’s policy toward China has been elusive and unpredictable. He ignited a firestorm of controversy soon after taking office by accepting a phone call from President Tsai Ing-wen of Taiwan and later saying that he may choose not to adhere to the “one China” policy, which has defined the U.S.-China-Taiwan trilateral relationship for decades. These actions seemed to indicate that he would live up to campaign rhetoric to take a tougher line on China than his predecessors. Yet after two weeks of silence between the two leaders, Trump switched tacks by promising to uphold the one China status quo in a phone call with President Xi Jinping. From Simon Denyer and Philip Rucker of the Washington Post:

In a statement issued late Thursday, the White House said the two men had held a lengthy and “extremely cordial” conversation.

“The two leaders discussed numerous topics and President Trump agreed, at the request of President Xi, to honor our one-China policy,” the White House statement said.

In return, Xi said he “appreciated his U.S. counterpart, Donald Trump, for stressing that the U.S. government adheres to the one-China policy,” which he called the “political basis” of relations between the two nations, state news agency Xinhua reported. [Source]

The call has been taken by many as a sign of acquiescence by Trump to Xi, as he acknowledged that his mention of the “one China” policy was at Xi’s request. From Jane Perlez of The New York Times:

But in doing so, he handed China a victory and sullied his reputation with its leader, Xi Jinping, as a tough negotiator who ought to be feared, analysts said.

“Trump lost his first fight with Xi and he will be looked at as a paper tiger,” said Shi Yinhong, a professor of international relations at Renmin University of China, in Beijing, and an adviser to China’s State Council. “This will be interpreted in China as a great success, achieved by Xi’s approach of dealing with him.”

Mr. Trump’s reversal on Taiwan is likely to reinforce the views of those in China who see him as merely the latest American president to come into office talking tough on China, only to bend eventually to economic reality and adopt more cooperative policies. That could mean more difficult negotiations with Beijing on trade, North Korea and other issues. [Source]

Some have attributed the change in stance toward Taiwan to newly sworn in Secretary of State Rex Tillerson, former CEO of Exxon Mobil, as well as National Security Advisor Michael Flynn, who has since resigned. Reuters reports:

The abrupt course adjustment, made public in a White House statement on Thursday after a phone call between Trump and Chinese President Xi Jinping, followed White House meetings this week involving Secretary of State Rex Tillerson, the U.S. officials said, speaking on condition of anonymity.

Tillerson joined Trump’s national security adviser Michael Flynn and others in what one administration official described as a concerted effort to persuade the president that “this is the right way to go, this is right for the relationships and regional stability – and they won the day.”

The successful intervention by Tillerson, a former Exxon Mobil chief executive with no previous diplomatic experience who was confirmed just nine days ago, suggests that in a White House-dominated administration, the new secretary of state could help drive decisions on some geopolitical issues.

Tillerson’s emerging role suggests that he could be a moderating influence with both friends and adversaries who have been unnerved at times by Trump’s rhetoric and unpredictability. [Source]

While official media in China welcomed Trump’s stated commitment to the “one China” policy, some observers caution that it is too soon to declare Xi the winner this round as future unpredictability from the Trump administration should be expected. Ben Blanchard at Reuters reports:

Xi has put great personal political capital into seeking a solution over Taiwan, an issue that has festered since 1949 when defeated Nationalist forces fled to the island after losing the civil war to the Communists. China has never renounced the use of force to bring Taiwan under its control.

But in its relations with Washington, the risk for Beijing remains that its diplomatic win over “one China” will be short lived, as Trump will not want to be seen as having caved in.

“What he’s shown the Chinese is he’s willing to touch the ‘third rail’ of U.S.-China relations,” said Dean Cheng, China expert at the conservative Heritage Foundation in Washington.

“Beijing can’t predict what he’ll do next – and he’s only been in office three weeks. What is he going to do on trade and other economic issues?” [Source]

In a ChinaFile conversation titled, “Did Xi Just Outmaneuver Trump?” MIT’s M. Taylor Fravel follows up on the theme of unpredictability:

The initial response to the call has been to declare Xi the “winner” and Trump the “loser,” based on Trump’s reversal. The New York Times declared that Trump’s move “gives China an upper hand.” Yet diplomacy is not a boxing match. The rush to keep score is premature for several reasons.

First, Trump only referred to the policy. In all the available readouts of the call, no mention exists of Trump repeating the components of the one China policy, which include the three communiqués (1972, 1979, 1982), the 1979 Taiwan Relations Act, and the 1982 “six assurances” given to Taiwan. Although a helpful affirmation of the foundation of U.S.-China relations, Trump’s general reference to the one China policy left him room to interpret it broadly.

Second, with Tsai’s election as Taiwan’s President, Beijing has pressed her to affirm the “1992 consensus” about one China. Her reluctance to do so means Beijing is growing ever more suspicious of her intentions regarding independence. In this context, if Trump decides to significantly alter U.S. relations with Taiwan, even if he does so while remaining under the umbrella of a one China policy, tensions in U.S.-China relations will likely increase significantly.

Third, talk is cheap. Trump is an unconventional president, with a transactional orientation and impulse. He may change his mind, or offer a new interpretation. China will also push to cement his pledge in the call in other meetings and joint statements between U.S. and Chinese officials. Trump may decide to push back. [Source]

Meanwhile, in Taiwan, some were relieved that the return to status quo might mean Taiwan would not be used as a bargaining chip in Trump’s dealings with China. For background on the complex protocol governing relations between China, Taiwan, and the United States, see guides from Joanna Chiu of AFP and WMUR.

Many thorny issues remain between China and the U.S., and so far it remains unclear how Trump will navigate them; relations with North Korea are now the focus of attention after Pyongyang launched a missile over the weekend to which Trump responded in an uncharacteristic low-key manner. The Trump administration is continuing to threaten a trade war with China, though there is some indication that they may moderate their stance on that as well. The Chinese financial ties of some of his top advisors, including son-in-law Jared Kushner and incoming Commerce Secretary Wilbur Ross, have also raised questions about how the administration will proceed to deal with bilateral trade issues. The recent decision by a Chinese court to grant Trump intellectual property rights to his name in China, where products from toilets to condoms bear the Trump name, have also raised the specter of the president’s conflicts of interests.