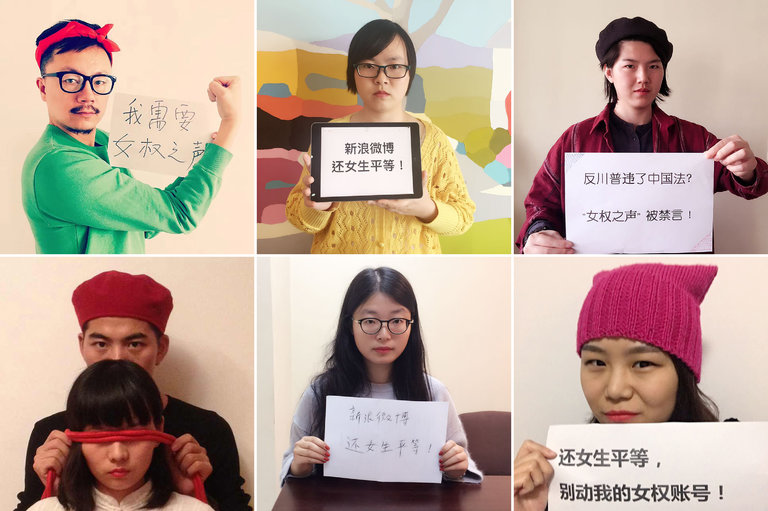 Feminist Voice (女权之声), a Chinese feminist group, had their Weibo account temporarily shuttered after it posted a translation of a Guardian article about a Women’s Strike called in the United States for March 8, International Women’s Day. Tom Phillips of The Guardian reports:

Xiong Jing, an editor for the “Feminist Voice”, told the Guardian that Weibo had sent the group a private message on Monday night informing it that the account, which was set up in 2010 and has more than 80,000 followers, had been temporarily blocked. Weibo blamed “recent publications [that] violated the state’s relevant laws”.

Speaking to Radio Free Asia, a US-funded news outlet, Xiong said Weibo had not been “very specific” about its motivations but “we are guessing that it’s because we sent out some tweets calling for a women’s strike action against Trump”.

Li Maizi, one of the leading lights of China’s nascent feminist movement, said the attempt to silence “Feminist Voice” was part of a broader government push to rein in those battling for gender equality. “It is part of a public opinion war and a battle for influence in China.” [Source]

Didi Kirsten Tatlow at The New York Times reports that participants in Feminist Voice believe the shutdown is part of a broader crackdown on civil society which they expect to intensify in the run-up to the annual National People’s Congress meetings in March and the 19th Party Congress this fall:

“This is about attacking civil society,” Lu Pin, a founder of Feminist Voices who lives in New York, said in a telephone interview. “They want to take away our voice.”

“What?” said a message posted on the group’s WeChat social media account. “What’s incomprehensible is a post reporting on a women’s event overseas could be breaking Chinese laws and regulations.”

The message said the group suspected that the post about the planned strike in the United States was behind the shutdown because that was the only one of its Weibo posts to be censored recently. [Source]

Chinese feminist activists living in the U.S. participated in the Women’s March on January 21, both to express opposition to the proposed policies and discourse of the newly minted Trump administration, but also to send a message back home to women’s rights activists in China. In an interview with The New York Times’ Luo Siling, activist Lü Pin explains:

Why did Chinese feminists take part in the Women’s March on Washington?

In 2015, the case of the Feminist Five attracted the support of feminists around the world, which made me appreciate the importance of international solidarity. Participation in this march was another expression of this. If feminists in the U.S. need support, I’m willing to join them.

We also wanted to contribute to the march’s diversity. So my friends made posters, in both Chinese and English. This was meant not just as a response to American feminists, but also to show women in China that we were engaged in international issues. In fact, I think promoting this march in China was more important than supporting American feminists. That’s why we organized the interactive broadcast through WeChat. [Source]

Two years ago around March 8, five feminist activists in China were detained for their participation in advocacy campaigns against sexual harassment. Since their release, they have been subject to varying degrees of official interference and harassment. Some have traveled overseas, including Li Maizi (aka Li Tingting), who has used social media to support Feminist Voice and the Women’s Strike.