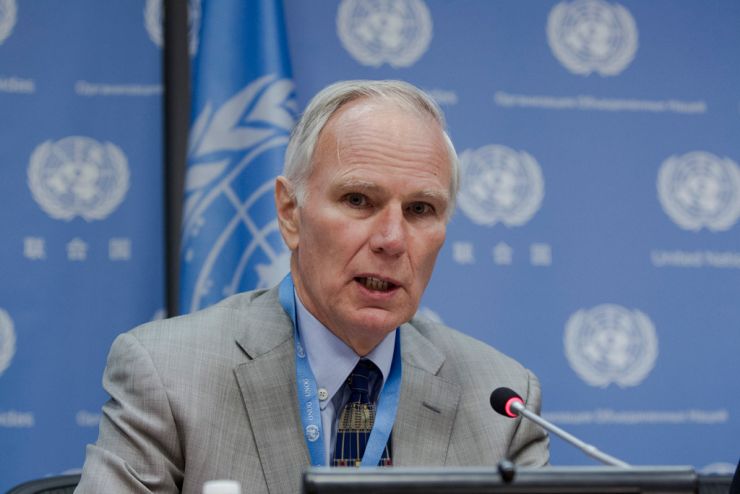 Economic growth and poverty reduction are two of the Chinese Communist Party’s core goals and sources of legitimacy. Last week, a Wall Street Journal columnist and a U.N. special rapporteur argued that there is increasing tension between them and Beijing’s other priorities of political control and social stability.

The Wall Street Journal’s Andrew Browne suggested that measuring the intensity of political control with a “repression index” might offer “one of the best indicators of the country’s economic direction” as the government prosecutes rights lawyers, restricts NGOs, tightens information controls, and attacks “hostile foreign forces”:

The crackdown is telling us that the leadership, despite outward displays of confidence, is growing increasingly insecure as it grapples with faltering growth, the mainstay of the Communist Party’s legitimacy. That translates into crippling indecision; leaders seem unable to summon the resolve to implement tough yet necessary economic overhauls.

[…] In purely economic terms, closing down these industrial relics [state-owned enterprises] is a no-brainer. They add to rampant overcapacity, as well as choking pollution. They’re the zombies at the heart of the country’s growth dilemma: More and more credit is producing less and less output. Mounting corporate debt threatens to crash the financial system. “Warning signs are flashing,” writes David Lipton, the first deputy managing director at the International Monetary Fund.

Yet apparently that prospect isn’t as troubling to the regime as the specter of unemployed workers flooding the streets.

[…] By contrast, the political crackdown is imbued with urgency. A repression index would prominently feature data on the plight of rights lawyers. More than 300 legal professionals and activists were briefly detained or interrogated last year, and several dozen formally held. Show trials are now under way. [Source]

The root of the crackdown, Browne suggests, is the rights lawyers’ “ability to coordinate and channel scattered public grievances at a time of growing economic distress.” Philip Alston, a U.N. Special Rapporteur on human rights and poverty alleviation, warned that the narrowing of channels for such grievances could prove dangerously destabilizing if the public finds itself with no way to raise and resolve problems within the system. Alston described the crackdown on lawyers and activists as past of a “pincer movement” which is “dramatically shrinking space for civil society actions.” From Javier C. Hernández at The New York Times:

The adviser, Philip G. Alston, said that the party’s dominance of the legal system had left Chinese citizens with few avenues to complain about issues like pollution and inequality. He dismissed the process for filing grievances as “window dressing,” and said party officials had suppressed meaningful policy debates.

“The government is coming at this from many different directions,” Mr. Alston, a special rapporteur on extreme poverty and human rights for the United Nations, said in an interview at the organization’s offices in Beijing. “That is a recipe for serious problems.”

[…] China lacks many of the checks needed to ensure justice for its citizens, Mr. Alston said. The authorities announced this week that they had punished more than 2,000 officials for failing to enforce environmental laws. But Mr. Alston, a New York University law professor, said the government should not be the only watchdog.

“There must be ways for those whose rights are violated to initiate action,” he said.

Mr. Alston said Mr. Xi’s government too often promoted party ideology over accountability. He called a series of high-profile trials of human rights activists this month a “major mistake,” and he expressed concern about the government’s efforts to limit the activities of foreign nongovernmental organizations. [Source]

Alston also noted China’s “admirable” achievements in poverty reduction, which Beijing and its advocates often employ as a first line of defense against critics. But he argued that without incorporating respect for human rights, even these accomplishments are compromised. From a UNHCR release:

He noted that the leadership of the Chinese Communist Party is confronted with enormous challenges in the form of slower growth rates, dramatic inequality, deep-rooted environmental degradation, and a struggle to define the rule of law. But he added that its determination to build a ‘moderately prosperous society’ free of extreme poverty cannot be doubted. “This political will is impressive and all too uncommon in today’s world,” Mr. Alston said at the end of his official visit* to the country.

President Xi Jinping has promised to eliminate extreme poverty by 2020, so that no-one shall be left behind. In practice, this means lifting 55.75 million rural people out of extreme poverty defined by reference to an income-based standard of $2.30 per day or 2,800 yuan per year. However, an important part of the human rights dimension of the challenge has so far been neglected according to Alston.

[…] “The crackdown on human rights lawyers that began in July 2015 and gathered pace with recent convictions, the persistent ineffectiveness of the system for petitioning officials, punitive responses to protests, new laws designed to limit the roles played by NGOs and to limit dramatically the role of foreign foundations, all seem to be heading in the direction of shrinking the space available to citizens to influence policy-making through public debate or to contest alleged violations of their rights,” the expert said.

“China has much to be proud of in the field of poverty alleviation. However, if it is to effectively ensure the implementation of its economic and social rights obligations, it needs to adopt more robust mechanisms for citizen involvement and for governmental accountability,” he noted. [Source]

In later remarks to reporters, he chided Beijing for asserting that governments should be able to choose which human rights to respect and which to ignore, depending on cultural practices.

“That approach is simply incompatible with the international human rights system,” Alston said.

“Given that China insists that it is part of the system… it would be very dangerous if we were to understand human rights with Chinese characteristics as authorising a fundamental departure from the full range of internationally agreed rights and standards.” [Source]

Meeting with General Assembly president Peter Thomson in Beijing on Friday, Premier Li Keqiang pledged support for the U.N.’s role and work. But Alston accused authorities of obstructing his investigations in China. From Reuters’ Ben Blanchard:

Philip Alston, the U.N. Special Rapporteur on extreme poverty and human rights, told reporters at the end of a nine-day visit to China that he had notified the government in advance of academics he wanted to meet on his visit, a routine practice for a U.N. special rapporteur.

“None of those meetings were arranged, and the message I got from many of the people I contacted was that they had been advised that they should be on vacation at this time,” said Alston, an Australian who is a law professor at the New York University School of Law.

[…] Alston said he was taken on an “abysmal tour” of a model ethnic village near the southwestern city of Kunming, where officials presented minorities in terms of colorful dances but not in terms of education or meaningful protection of language and traditions. [Source]

I would like to make two points on what the Special Rapporteur said after this visit.

First of all, after paying visits to China, both the Special Rapporteur and most other people who take a great interest in China’s human rights endeavor come to an objective conclusion, that is, China has made huge headway in the past several decades on economic and social development as well as the human rights condition under the leadership of the Chinese government.

Second, some of them may still be reluctant to admit that China’s achievement is basically attributable to its path of socialism with Chinese characteristics. Some of them may have a stereotype about human rights, and find China odd as it does not go their way. If they do care about human rights and the social and economic development of developing countries, it is hoped that they will take an unbiased view and do some serious thinking. The fact is that the model they have been promoting has not brought progress and genuine human rights to the majority of people in many developing countries. [Source]