Xi Calls for Restructured Military to “Serve the Party” 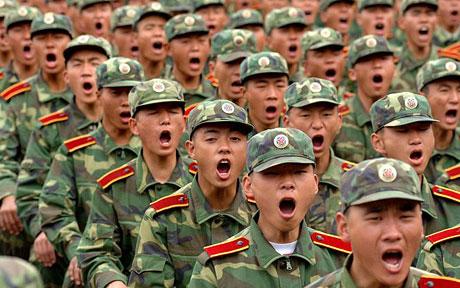 At Reuters, Philip Wen reports that Xi Jinping has announced a restructuring of the People’s Liberation Army in an effort to “to transform it into a leaner fighting force with improved joint operations capability.” One of Xi’s many titles is Chairman of the Central Military Commission, making him the commander-in-chief of the armed forces. This is the latest in a series of military reforms under Xi.

Centered around a new, condensed structure of 84 military units, the reshuffle builds on Xi’s years-long efforts to modernize the PLA with greater emphasis on new capabilities including cyberspace, electronic and information warfare.

[…] All 84 new units are at the combined-corps level, which means commanders will hold the rank of major-general or rear-admiral, the official China Daily reported Wednesday, adding that unit members would likely be regrouped from existing forces given the Chinese military was still engaged in cutting its troops by 300,000, one of the wide-ranging military reforms introduced by Xi in late 2015.

Those reforms include establishing a joint operational command structure by 2020 and rejigging existing military regions, as well as streamlining troop numbers particularly in non-combat facing roles.

[…] “Since military reforms started it has been one step at a time,” [China Arms Control and Disarmament Association senior researcher] Xu [Guangyu] told Reuters. “The high-level framework is now in place, now this is the second phase targeting the entire mid-ranking levels of the military.” [Source]

At the South China Morning Post, Laura Zhou and Minnie Chan report that after announcing the restructure, Xi called on the chief officers of the 84 mid-ranking units to ensure that the PLA “serves the Party.” Xi has issued this call to the PLA before, and last year made the similar demand that Chinese state media “speak for the Party.”

Speaking at the PLA’s headquarters in Beijing on Tuesday, Xi also said the army should remain on high alert and be ready for war at any time, according to the PLA Daily website.

[…] He has made similar calls for the military to serve the party in the past, but this was the first one directed at the new units.

[…] His remarks come as the party prepares for a major congress, held once every five years, in the autumn. A majority of the seats on the Politburo Standing Committee are expected to change, and Xi is likely to use the transition to ­further consolidate his power.

Xi has launched sweeping reforms of the military including an unprecedented anti-corruption drive that led to the downfall of many high-ranking officers, including former CMC vice-chairmen Xu Caihou and Guo Boxiong. [Source]

Read more preliminary analysis of the upcoming leadership transition at the 19th Party Congress, of recent military reforms, or of Xi’s anti-corruption drive, via CDT.

In addition to the long-running issue of the PLA’s subordination to the Party, Xi’s call plays into a fresh wave of emphasis on political loyalty among lawyers, SOE executives, and others. The Economist examined these recent calls for allegiance to Xi and the Party earlier this month.