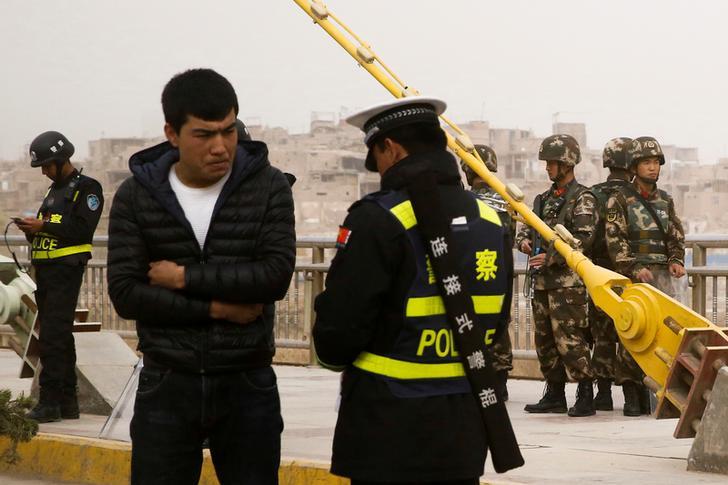 The Associated Press’ Matthew Brown reports on indications that public security authorities are laying groundwork for the mass collection of biometric data in the Xinjiang region, leading to concerns over a potential lack of oversight. Xinjiang is the frontline of a controversial crackdown on terrorism that has for years been criticized by human rights advocates for targeting members of the Uyghur ethnic minority, and exacerbating underlying ethnic tensions.

The purchases of DNA testing equipment in Xinjiang were confirmed by an official at the regional Public Security Bureau. The official, who gave only her surname, Huang, said a supplier already had been found. In Xinjiang’s Sheche County, suppliers were being sought for voiceprint collection systems and 3-D portrait systems, according to a security official surnamed Yin, who declined to give further details.

If used at full capacity, the new equipment could be used to profile up to 10,000 DNA samples a day and several million a year, said Yves Moreau, a computational biologist specializing in genome analysis and DNA privacy at the University of Leuven in Belgium.

The scale of the purchases raises “a legitimate concern that Chinese authorities could be planning to DNA profile a large fraction, or even all” of the Uighur people in Xinjiang, Moreau said.

[…] Since it started collecting DNA profiles in 1989, China has amassed the unique genetic information on more than 40 million people, constituting the world’s largest DNA database, according to a study last year by forensic researchers at the China Ministry of Public Security. […] [Source]

Human Rights Watch has expressed sharp concern about the absence of privacy protections in the apparent plans to expand the collection and indexing of DNA in Xinjiang and among other vulnerable populations in China, citing examples of people who have had their DNA collected without warrant and against their will:

In many parts of the country, police officers are compelling ordinary individuals – neither convicted nor even suspected of a crime – to have their blood drawn and DNA taken. Samples have also been collected from vulnerable groups already targeted for increased government surveillance, including migrant workers, dissidents, and minority Muslim Uyghurs. Because police wield wide powers, and because there are no actionable privacy rights in China, people have little ability to refuse the collection of such personal information.

“DNA collection can have legitimate policing uses in investigating specific criminal cases, but only in a context in which people have meaningful privacy protections,” said Sophie Richardson, China director at Human Rights Watch. “Until that’s the case in China, the mass collection of DNA and the expansion of databases needs to stop.”

[…] “Mass DNA collection by the powerful Chinese police absent effective privacy protections or an independent judicial system is a perfect storm for abuses,” Richardson said. “China is moving its Orwellian system to the genetic level.”

[…] Individuals who have had their DNA taken by police have detailed their experiences on social media platforms, including Weibo, Zhihu, Baidu Zhidao, Tieba, and Tianya. In these posts, netizens described officers coming to their homes, schools, and workplaces to collect their samples; none described having been presented any warrant or the visits having been announced in advance. In other cases, people discuss having been required to provide DNA samples when they applied for documents from the police, including residency permits and ID cards. In some other cases, police officers have demanded DNA samples from individuals whom they had taken to the police station for questioning, though in the vast majority of these cases the individuals were not suspects formally detained or arrested for crimes. […] [Source]

Quartz’ Echo Huang has more on how biometric gathering is currently being used in Xinjiang, plus further examples of those elsewhere in China being targeted by current DNA-based security programs:

In China’s Muslim-heavy Xinjiang Uyghur Autonomous Region, for example, which has been subject to a number of crackdowns in an effort to wipe out homegrown terrorists, local authorities have been spending millions of dollars for genotyping kits, the report said. Local citizens have been required to submit DNA samples for passport applications since September (link in Chinese). In the same month, the regional police bureau spent 60 million yuan ($8.7 million) (link in Chinese) for testing materials.

[…] In another case, police in China’s northeastern province Shandong collected DNA examples of more than 5,000 male students without giving any specific reasons in October 2013. The collections came after local Binzhou University had reported multiple thefts involving losses of around 200,000 yuan ($29,000). Police cited Article 130 and said they would not reveal any personal information of the students (link in Chinese).

Groups seen as troublemakers, like migrant workers, activists and petitioners seeking redress for a variety of greivances, are also being targeted for DNA collection. In 2014, police in Guanshanhu District of China’s southwestern city Guiyang launched a campaign to collect fingerprints and DNA samples of migrant workers, so as to “construct a harmonious society” (link in Chinese). [Source]