Person of the Week: Qiao Mu 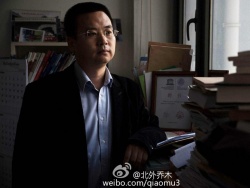 Qiao Mu studied English at Shaanxi University, then earned a masters in international politics from Renmin University and a doctorate in international relations from Tsinghua University. He joined the faculty at Beijing Foreign Studies University (BFSU) in 2002, where he established the university’s international news broadcasting masters track, its first non-language focused program.

In 2006 Qiao Mu published “Dragon in the Eagle’s Eye: U.S. Media Coverage of China and Sino-U.S. Relations” (鹰眼看龙: 美国媒体的中国报道与中美关系). In addition to his frequent commentary on foreign relations and the media, Qiao Mu also writes about censorship and other sensitive topics. He has been a regular commentator to foreign media on topics such as information control, propaganda, and China’s democratic prospects.

Qiao has tried to become involved in politics beyond offering commentary. In 2011, Qiao sought election to Beijing’s local People’s Congress, part of a nation-wide wave of independent campaigns. Like many such candidates that year, though, Qiao never had the chance to run. One week ahead of the election, Qiao’s social media accounts and campaign video were blocked, and he was prohibited from entering dormitories, according to one of Qiao’s students. Student volunteers were urged by university officials to drop out of the campaign, while still others quit in the wake of rumors that Qiao was under the protection of the U.S. embassy.

Qiao has had fleeting success in university politics. In 2014, Qiao reported his colleague He Jiong to the university for taking a salary without actually working. After BFSU confirmed the allegation, He Jiong resigned. That same year, Qiao was suspended from teaching for “violating discipline at work” and reassigned to the library. While Qiao languished at the library, he continued to speak to foreign media and criticize China’s constrained media environment. “The people of China, and the media of China, are unwilling and unable to discuss domestic politics,” he wrote in a Hong Kong paper in February 2017. “They feed instead on the vagaries of international affairs.”

Qiao Mu was once again at the center of a controversy in April 2017 over an essay he posted online about how female students are often judged by male professors based on their appearance, including admission of his own bias towards a particular candidate whose “heaving breasts” clouded his vision. Qiao attracted both criticism for alleged sexism, and praise for being honest about a widespread issue. He replied to the critique claiming that his words had been taken out of context. In the midst of this storm, Qiao resigned from BFSU, citing pressure from the administration regarding his political views.

As Qiao was gradually losing his academic standing, colleagues and friends suggested that he leave China. He has insisted on staying. As he told The Guardian in 2015, “We must change our nation, not our nationality.”