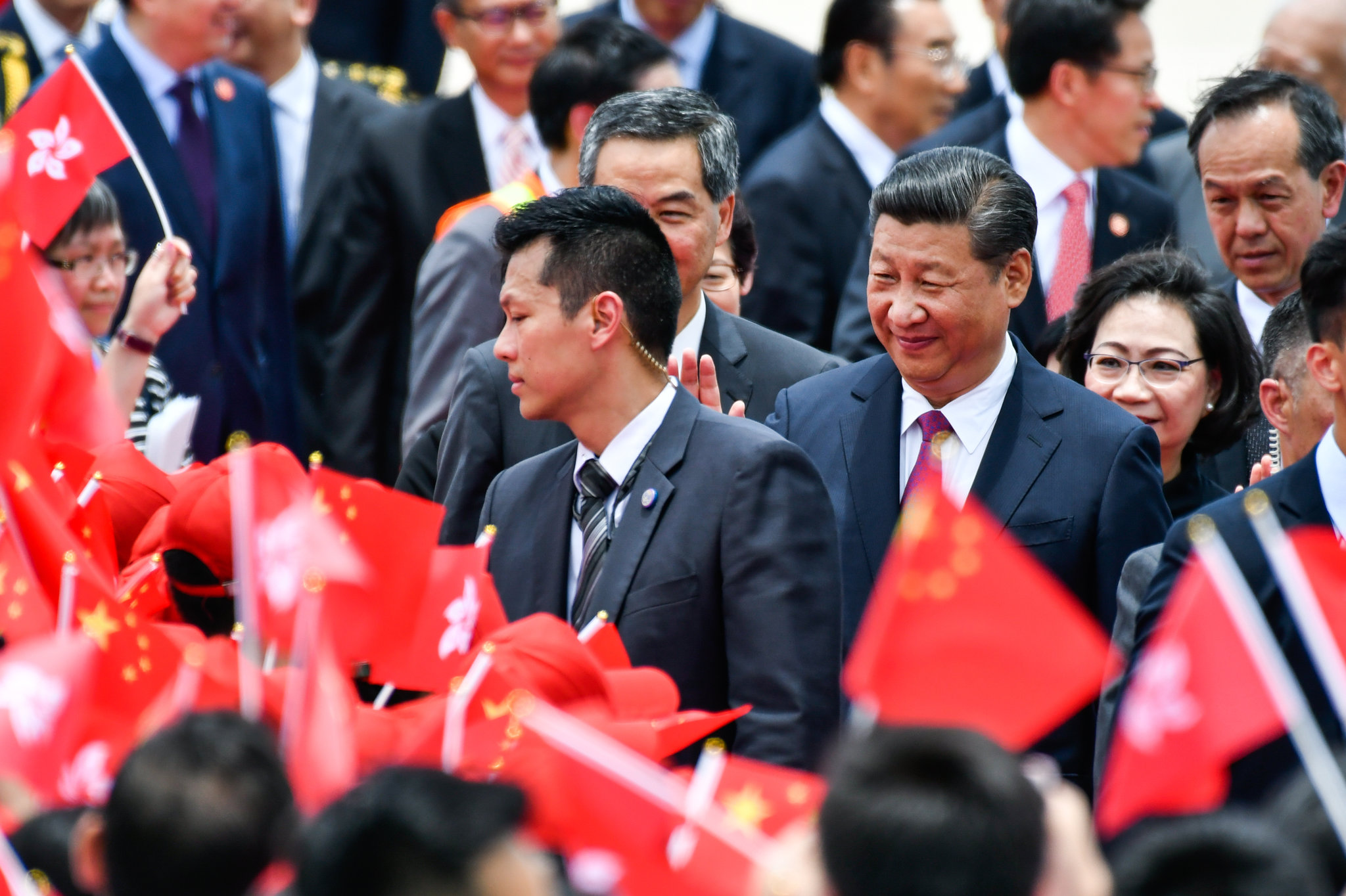 Chinese President Xi Jinping is in Hong Kong for a landmark three-day visit to mark the 20th anniversary of the former British territory’s transfer from British to Chinese rule. In a speech Saturday morning, Xi emphasized China’s sovereignty and said any challenges to Beijing’s rule were “absolutely impermissible.”

"I am sorry, Mr Xi Jinping, you are a liar" – Hong Kong activists not hugely impressed with Chinese president's speech this morning pic.twitter.com/kqeXR9dxSJ

Xi’s visit to a People’s Liberation Army base in Hong Kong on Friday also highlighted Beijing’s resolve to prevent challenges to its authority, as many in Hong Kong express fears that the city’s autonomy is being increasingly undermined by Beijing. From Austin Ramzy as part of The New York Times’ roundup of major developments taking place over the course of the handover anniversary:

Mr. Xi visited a People’s Liberation Army base on Friday in the New Territories of Hong Kong, reviewing troops as he rode in the back of a military jeep, highlighting the most potent symbol of Chinese sovereignty in the territory. It was the largest such military display by Chinese soldiers in Hong Kong since they arrived 20 years ago.

[…] The Chinese military is expected to take on a more prominent role in Hong Kong. This month Yuan Yubai, the commanding officer of China’s southern military command, and Wei Liang, the political commissar, wrote in a leading Communist Party journal that the Hong Kong garrison should move beyond its symbolic function.

“The garrison will always declare sovereignty as its first and fundamental task,” they wrote in Qiu Shi, or Seeking Truth. But it must change “from being a good model to a force that has the ability to win battles.”

A powerful display of the military’s presence will come in just over one week, when China’s first aircraft carrier, the Liaoning, will visit Hong Kong as part of events to mark the 20th anniversary of the handover. [Source]

On Thursday, President Xi praised Hong Kong’s local government for “effectively curbing” support for independence in the city and for successful implementation of the “one country, two systems” policy,  which guarantees Hong Kong limited rights and autonomy under the Joint Declaration signed by Britain and China at the time of the handover. Yet despite Xi’s stated commitment to “one country, two systems,” Foreign Ministry spokesperson Lu Kang on Friday announced that the Joint Declaration is a historical document that “no longer has any practical significance.” From Jeffie Lam, Stuart Lau, and Tony Cheung at South China Morning Post:

On the first day of his three-day visit to celebrate the 20th anniversary of Hong Kong’s handover to China, Xi said “the city’s governing team has worked hard and shown a sense of responsibility towards the country, Hong Kong and history” in making the “one country, two systems” policy a success.

In a meeting with top officials, including heads of the city’s judiciary and legislature, Xi said: “You made achievements on issues such as land, housing, elderly and poverty … and, especially, on steadily handling a series of important political and legal issues and curbing ‘Hong Kong independence’ effectively.”

The president praised Chief Executive Leung Chun-ying’s team for demonstrating a “noteworthy sense of political commitment”. Key members of Leung’s team will stay on to serve under his successor, Carrie Lam Cheng Yuet-ngor, who takes over as the city’s leader on Saturday. [Source]

Joshua Wong and several other pro-democracy activists who played an instrumental role in the “Umbrella Movement” pro-democracy protests in 2014 were detained prior to Xi Jinping’s visit as parts of the city went into virtual lockdown amid a huge security operation to safeguard the Chinese leader. James Griffiths at CNN reports:

A major reason for the relative calm is that former “Umbrella Movement” leaders Joshua Wong, Nathan Law and other activists are languishing in police custody after they were arrested Wednesday night.

The pair were arrested with two dozen others after they occupied Golden Bauhinia Square, where an official flag raising ceremony attended by Xi will take place later this week.

As of Friday morning, all 26 protesters had been released from custody, a spokesperson for the activists confirmed.

[…] Much of Wan Chai, a bustling business district in the city center where Xi will stay, is on partial lockdown, with 300, 2-ton barricades erected on roads around the Hong Kong Convention and Exhibition Center. The venue will host many events marking the city’s handover from the UK to China.

Around 11,000 of the city’s 29,000 police officers have been drafted to take part in security arrangements for Xi’s visit, according to the South China Morning Post. [Source]

Wong represents the younger generation of protesters who see themselves first and foremost as Hong Kongers, in a shift from their predecessors who were more likely to identify as Chinese. In a show of multigenerational unity, in the Washington Post, Wong joined forces with veteran democracy activist and former Legislative Council member Martin Lee to write an op-ed calling on Xi to implement full democracy in Hong Kong:

The past several years have delivered an acceleration of worrying encroachments, including Beijing’s extrajudicial abductions of five publishers and a businessman from Hong Kong, threats to journalists and media freedom, the removal of elected legislators, a surge in arrests of student activists, and attacks on our independent judiciary. Our clean markets are increasingly tainted by crony corruption from China, and our government is effectively controlled by Beijing’s apparatchiks from the Central Liaison Office in Hong Kong.

The challenges we face were exemplified by the 2014 Umbrella Movement demonstrations, when tens of thousands took to the streets to demand greater democracy — a demand that remains unmet. Our fellow citizens often ask us, “Haven’t you failed?”

To be sure, our long fight hasn’t achieved our stated goals. But looking back at the 20 years since the 1997 handover, there are many reasons for optimism about the future, alongside the need for action to protect basic human rights.

Hong Kong journalists, lawyers, students, religious leaders, teachers, business executives and other citizens have resisted every encroachment by Beijing. We have fought to preserve our core values, including the rule of law, transparency, a free flow of information and free markets — the values that have long been a beacon for China and beyond. [Source]

At The Washington Post, Victoria Tin-bor Hui, associate professor in political science at the University of Notre Dame, looks at why Hong Kong needs democracy if it is to preserve its freedoms.

Optimists point out that people in Hong Kong openly commemorate the June 4 Tiananmen anniversary, practice Falun Gong exercises that are banned in China, mock Chinese President Xi Jinping (but not during his visit to Hong Kong), demonstrate against government policies, and even produce controversial films that broach the taboo subject of independence.

Pessimists contend that various freedoms have become increasingly hollowed. People who criticize Beijing may be prosecuted for civil disobedience or deprived of the means of sustenance. Critics have been demoted or fired (or even physically attacked), and some had their works censored or their contracts terminated. Despite these threats, professionals in many fields have continued to assert their freedoms.

In the aftermath of the Umbrella Movement, the Hong Kong government tightened control over universities and high schools, the hotbeds of dissent, by stacking university councils with pro-regime appointees and by introducing patriotic education requirements.

[…] Political scientists have long argued that democracy must go hand in hand with liberal institutions. Hong Kong remains the world’s only case of “freedom without democracy.” This model was viable before 1997 only because the United Kingdom was a democracy. After the handover, Hong Kong’s freedoms have become beholden to China’s one-party dictatorship. [Source]

In an open letter to Carrie Lam, Human Rights Watch has called on the next chief executive and other political leaders in Hong Kong to “use their position and power to resist Beijing’s pressure on the legal system, the press, and diverse political views – while they still can.”