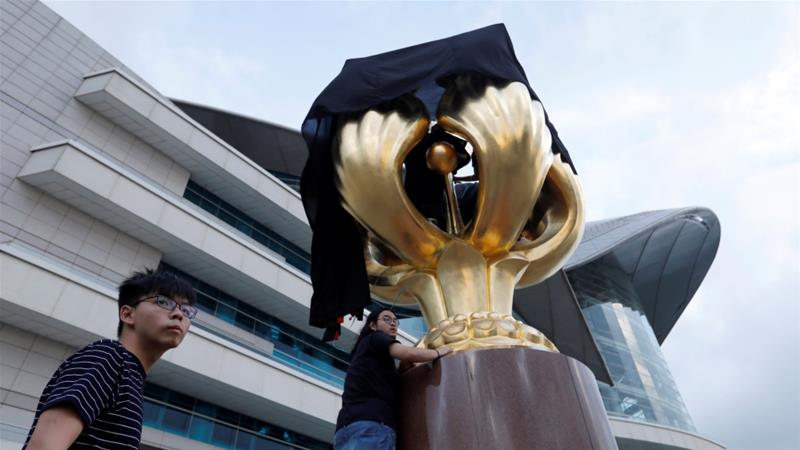 Chinese President Xi Jinping is set to visit Hong Kong on Thursday for the first time since becoming president to mark the 20th anniversary of the former British colony’s handover to Chinese rule. The occasion will also coincide with the swearing in of Carrie Lam as the city’s new chief executive. Tony Cheung and Jeffie Lam at South China Morning Post report:

Xi’s packed itinerary includes overseeing the swearing-in of the new chief executive, Carrie Lam Cheng Yuet-ngor, and her cabinet on July 1. Before flying out later that day, he is expected to make visits to one of the city’s two biggest and most controversy-plagued infrastructure project sites – either the Hong Kong-Zhuhai-Macau bridge or the high-speed rail link to Guangzhou.

[…] According to the official itinerary the president and his wife will land at Hong Kong International Airport on Thursday.

Xi is scheduled to attend a banquet that evening with Chief Executive Leung Chun-ying at Government House.

On Friday, he will inspect the local garrison of the People’s Liberation Army, as commander of China’s armed forces, before attending functions at the convention centre in Wan Chai. [Source]

Xi’s upcoming visit has been greeted with protests by Hong Kong’s pro-democracy activists, who have draped a black flag over the city’s symbolic bauhinia statue that was presented to the territory as a gift from Beijing upon its return to China in 1997. From Al Jazeera:

Joshua Wong, a prominent student campaigner, and a dozen demonstrators attached the black cloth to the giant golden bauhinia flower on Hong Kong’s harbourfront in an early morning protest on Monday as security tried to stop them climbing on the famous tourist attraction.

“The black-cloaked statue symbolises the hard-line rule of the authoritarian regime over the past twenty years,” the protesters said in a statement.

The sculpture of the bauhinia, which became the emblem of Hong Kong after the handover, was a present to the city from China in 1997 and stands outside the convention centre where Xi will attend anniversary events during a three-day visit starting on Thursday.

Police were called to take the flag down while the protesters chanted “democratic self-determination for Hong Kong’s future” and “one country, two systems has been a lie for 20 years”, referring to Hong Kong’s semi-autonomous status. [Source]

Joshua Wong is a former student leader of the 2014 pro-democracy “Umbrella Movement” protests who called for a fully democratic election of Hong Kong’s chief executive. Wong was charged along with two other protest leaders in 2015 for unlawful assembly and sentenced last year to 80 hours of community service. He currently heads the Demosisto political party that he and his fellow activists formed in 2016.

The targeting of the bauhinia statue is the first of what is expected to be many protests around the handover anniversary. As part of the security arrangement for President Xi Jinping’s arrival, Hong Kong police have been instructed to shield Xi from seeing phrases and images banned in China, including those of the yellow umbrella symbolizing the 2014 protest movement and other iconographies with reference to June 4th.

In an interview with Bloomberg, Hong Kong’s chief executive-elect Carrie Lam claims that the special administrative region will increase in global economic importance as a result of further integration with China, while shrugging off concerns that the city’s autonomy is eroding. Ting Shi and Betty Liu report:

President Xi Jinping’s Belt-and-Road Initiative — along with a plan to create a Silicon Valley-like innovation haven by linking Hong Kong and neighboring Macau with the southern manufacturing powerhouse of Guangdong — would benefit the financial hub, Lam said in an interview in Hong Kong on Friday.

“We’re now even more relevant,” Lam, 60, told Bloomberg Television on the sidelines of the Wharton Global Forum. “We will not only benefit from this deepening and opening up, we’ll actually be able to contribute to these major initiatives.”

Lam’s five-year term begins on July 1 — the 20th anniversary of the former British colony’s return to Chinese rule — in a ceremony that Xi is expected to attend. She faces growing concern that Beijing is eroding Hong Kong’s reputation as a bastion of free speech and the rule of law rather than preserving the “high degree of autonomy” it promised for 50 years after regaining stewardship in 1997.

In the interview, Lam brushed off such worries, saying that calls for independence, which gained traction in last year’s legislative elections, were a “sensitive flash point” that contravened China’s “one country, two systems” framework for Hong Kong. [Source]

Regarding the 2015 kidnapping and detention of a group of Hong Kong booksellers who published works critical of the Chinese Communist Party, Lam maintains that the case is of no concern to the city’s government and that it should not meddle in mainland affairs. From Benjamin Haas at The Guardian:

“It would not be appropriate for us to go into the mainland or challenge what happens on the mainland,” Lam said in an interview with CNN, adding that the booksellers case “has to be dealt with in accordance with the mainland’s system”.

Hong Kong was handed to China by Britain in 1997 and was allowed to maintain many freedoms, including separate laws, legislature and government, under a framework known as “one country, two systems”.

Under that framework the chief executive is supposed to represent the views and concerns of Hong Kong residents to Beijing, and Chinese police are prohibited from operating in the city.

[…] One of the missing booksellers, Swedish citizen Gui Minhai, was taken from his flat in Thailand and remains in custody. The four other detained men were later released. [Source]