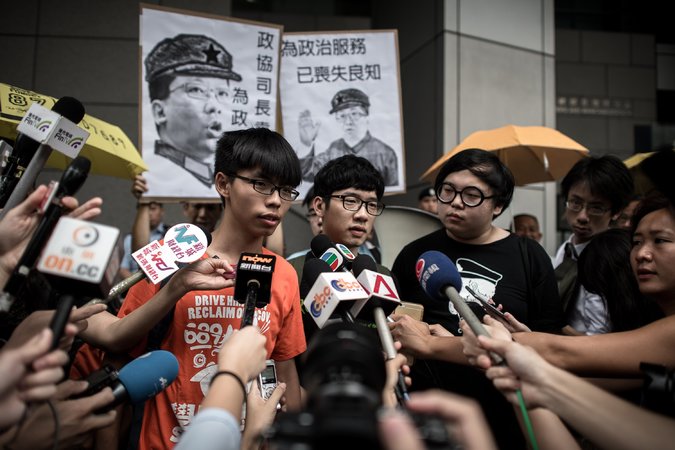 At The New York Times, Alan Wong reports that members of Hong Kong’s student activist group Scholarism are in the process of forming a new political party to run candidates in September’s Legislative Council election. High on the party’s agenda is to raise awareness about Hong Kong’s future after 2047,  the year when the “one country, two systems” principle is set to expire.

“We want to take back our future,” said Joshua Wong, the leader of the group, Scholarism, which rallied students to protests that paralyzed streets in several districts here in 2014 as part of a campaign for democratic reform known as the Umbrella Movement.

In about a decade, Mr. Wong said in an interview on Wednesday, the new party will push for a referendum that would let Hong Kong’s voters determine whether to split from China after 2047, the year when China’spromise of 50 years of high autonomy and a “one country, two systems” governing principle in the former British colony expires.

[…] Oscar Lai and several other members of the group will run in the local legislative election this fall. Mr. Wong, 19, is too young to run. He filed an application for a judicial review of Hong Kong’s election laws last October to lower the minimum age for candidates to 18 from 21, though the prospect of changing the age limit before the election is slim.

“No one in the legislature right now has brought up the issue of Hong Kong’s future after 2047,” said Mr. Lai, 21, a student. “We’re going to bring the same dogged resistance protesters showed in the Umbrella Movement into the legislature.” [Source]

Members of Scholarism were key figures in the 2014 Umbrella Movement, a civil disobedience campaign that advocated for a fully democratic election of Hong Kong’s chief executive in 2017. The students’ decision to form a political party is the latest in a series of developments underlying the increasing political prominence of young activists in Hong Kong. Last November, eight supporters of Hong Kong’s democracy movement were elected as district councilors.

Twenty students and activists protested outside the Education Bureau’s office in Wan Chai on Monday afternoon, accusing the bureau of proposing a series of curriculum changes that they say “brainwash” students.

The protesters, who were from Scholarism, PMI Students Concern Group and Societas Linguistica Hongkongesis, demanded the government shelve a proposal to teach simplified Chinese characters in public schools and as well as scrap changes to the Integrated Humanities subject curriculum.

[…] Scholarism also raised concerns over the proposed curriculum change of the Integrated Humanities subject. They said that keywords like “nation”, “One Country, Two Systems”, and “Basic Law” were added deliberately into the new syllabus, and feared that this might imply an inclusion of the ill-fated Moral and National Education curriculum into the Integrated Humanities subject. [Source]

While the introduction of simplified Chinese does not replace the use of traditional characters in Hong Kong schools, Legislative Council President Jasper Tsang Yok-sing has urged the Education Bureau to conduct thorough research before implementing the proposed plan to avoid creating “confusion.”

Meanwhile, a top Beijing official in Hong Kong has blamed “radical separatists” for instigating the Lunar New Year riots in Mong Kok. The incident, which has been dubbed the “fishball revolution,” stemmed from the mishandling of a crackdown on illegal street vendors that turned violent. Anne Marie Roantree at Reuters reports:

Beijing’s top representative in Hong Kong has blamed radical separatists for riots that erupted in the Chinese-ruled city almost a week ago, the worst violence since pro-democracy protests paralyzed parts of the Asian financial center in 2014.

More than sixty people have been arrested in connection with the violence, during which protesters hurled bricks at police and set fire to rubbish bins in Mong Kok, a tough, working-class neighborhood just across the harbor from the city’s financial district. Thirty-seven people were charged on Thursday.

[…] The actions of the “radical separatists” were “leaning toward terrorism”, the South China Morning Post daily quoted Zhang Xiaoming, the head of Beijing’s Liaison Office in Hong Kong, as saying.

[…] At least one of those charged in connection with the trouble belongs to a group called Hong Kong Indigenous, one of a cluster of outspoken groups calling for greater Hong Kong autonomy and even independence from China, the group said. [Source]

At HKFP, Karen Cheung writes that the Hong Kong government has rejected a call by scholars and professionals for an independent inquiry into the Mong Kok riot.

Professionals and scholars across various higher education institutions in Hong Kong initiated a petition on Sunday demanding the government establish an independent committee headed by a judge to investigate the clashes. As 8am Tuesday, it has been signed by almost 2,000 people.

The government, however, said they disagree there is a need to do so. On Monday evening, a government spokesperson said: “The riot in Mong Kok was a serious violent incident. Criminal investigations by the Police are underway with a view to apprehending all culprits for fair trials and rulings by the court. As such, [the government] does not consider it necessary to set up an independent commission of inquiry, headed by a judge, to look into the incident.”

[…]Police Commissioner Stephen Lo Wai-chung announced on Monday that an internal committee headed by Deputy Commissioner of Police in Management Alfred Chau Kwok-leung will be conducting a review of police action during the Mong Kok unrest. It will look into areas such as the equipment used, strategies employed, the quality of command and communication, and so on. [Source]

At South China Morning Post, Michael Chugani warns that violent protest tactics like the ones used in Mong Kok may be used by Beijing as a justification to take a hardline approach in Hong Kong.